The United States military has dropped the “Mother of All Bombs” — aka MOAB — in Afghanistan. It was the first time the bomb was deployed in battle, which has the dubious distinction of being the biggest non-nuclear bomb in the American military arsenal.

The Pentagon announced the MOAB had been dropped in Afghanistan near the Pakistan border near a cave network thought to be used by ISIS. It is the second of two major overseas strikes by the US military, the first occurring in Syria as a retaliation against the use of chemical weapons, in as many weeks. 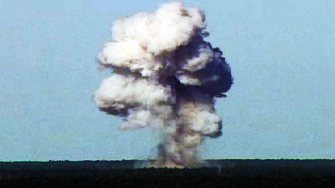 Given that the MOAB is the largest non-nuclear bomb the United States has engineered, just how does it compare to the atomic bombs dropped on Japan near the conclusion of WWII? Well, the MOAB may be huge by conventional standards, but it is nowhere near as powerful as the atomic bombs dropped on Hiroshima and Nagasaki. To give perspective, here are the equivilant tons of TNT contained in the explosion of each bomb (referred to as tonnage):

What's FOAB? It's the Father of All Bombs, 4 times more powerful than the MOAB. It's also a thermobaric bomb that uses the air around it to aid in even greater destruction.

In related news, anchorman Brian Williams has come under fire (perhaps, in this writer's mind, unfairly) for quoting the Leonard Cohen song "First We Take Manhattan" after viewing footage of last Thursday's missile strike in Syria — the first of Trump's overseas strikes. Williams' use of the word "beautiful" 3 times in 30 seconds contained a reference to the Cohen song from 1988:

I’m guided by the beauty of our weapons.

Are weapons beautiful? Can destruction, at least aesthetically, be visually stunning? These are questions for scholars and critics alike but instead have been answered by the hive-minds at Twitter, who tore Mr Williams to shreds for suggesting an opinion beyond their own. So it goes, sports bomb fans! So it goes.

Researchers Might Have Just Figured Out Why Deep Breaths Work

This could have potential therapeutic applications in anxiety and trauma.