Domino’s Pizza is fixing America’s deteriorating roads, one pothole at a time.

Yes, you read that correctly. It’s called Paving for Pizza, and there’s a whole website dedicated to it. The pizza company is not exactly known for benevolent infrastructure spending (it’s perhaps best known for being the “eh, there’s always Domino’s” food choice, not that I’m complaining because quite frankly I’ll eat an entire medium in one sitting if no one is watching), but if you’ve been paying attention to its advertising lately, this shouldn’t come as a surprise.

Domino’s currently has an ad campaign circling around ‘pizza insurance’—wherein if you drop your pizza or something happens to it on the way home, Domino’s will replace it. So this new tie-in makes sense. The franchise has a whole website dedicated to the trials and tribulations a pizza goes through when the car whacks a pothole.

Potholes cost about $3 billion a year to drivers, and the American Society of Civil Engineers believes it would cost $2.7 trillion to fix entirely. And every dollar not spent on road repair this year will cost $7 in 5 years, according to Pothole Info.

So far, Domino’s has fixed five potholes in Burbank, CA; eight holes in Bartonville, TX; 40 holes in Milford, DE; and 150 potholes in Athens, GA. They all come with a free topping: some corporate branding on top of the pothole. It looks like this: 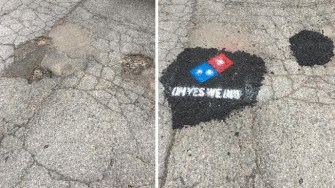 Is it embarrassing that our official institutions cannot maintain roads themselves? Yes. But is this solution mildly pleasing, and welcome when you’re in need? Yes. Sort of like Domino’s itself.

The world’s newest land, created by Hawaii’s volcanic outburst, already has an owner.