The worlds of sports and crime collided not once yesterday, but twice: Argentine soccer star Lionel Messi and his father-slash-financial manager Jorge Messi were found guilty of tax fraud in Spain, while in South Africa the infamous Paralympic athlete Oscar Pistorius was sentenced for the 2013 murder of his girlfriend Reeva Steenkamp.

Naturally the internet is ablaze with opinions about whether or not their punishments fit their crimes. Has the judicial system, once again, given celebrity athletes an easy ride?

Let’s look at their sentences: Lionel and Jorge Messi were collectively fined approximately €3.5 million, and sentenced to 21 months in prison. Pistorius was sentenced to six years in prison, which is nine years less than the mandatory guideline, and may be eligible for parole at the discretion of prison authorities in three to four years. Many have cried ‘corrupt judge’ and only one has cried – nay, hashtagged – #wisewoman, and that was Oscar Pistorius’ brother Carl.

In Spain, prison terms below 24 months can be served under probation, so it’s unlikely Messi junior or senior will ever see the inside of a cell. That’s a nationwide Spanish law, so it seems fairly egalitarian.

For Pistorius the issue is complicated by South Africa’s racial climate, and people have rushed to Twitter to point out the disparate sentencing outcomes for violent crimes between races and social classes. 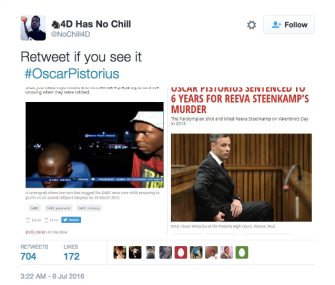 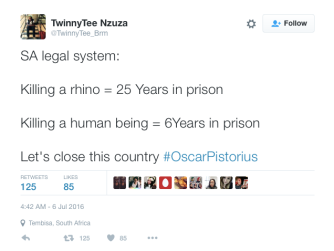 Were these sentences fair, and how the heck can we begin to address that question?

In the recent history of sports, there appears to be an undeniable correlation between crime and pro athletes. It could be that this view is accurate, or it could be that it’s a case of overexposure, an unquenchable media thirst for juicy news, the same way you’re only afraid of plane crashes because every single jet that plummets down is an awful news tragedy. You’ll probably listen in fear on the radio during your daily ride in your gravity-adhering accident wagon. But whether it’s a case of over-reporting or not (there are even claims that NFL players are more law-abiding that the average population) there’s a strong general consensus that certain athletes have gotten off easy.

A good example is to look at the two separate DUIs processed in a similar time window through Michigan State Court: one was the retired NBA player Jalen Rose and the other the then-active center for the Detroit Pistons Ben Wallace. Rose was sentenced to a 92-day jail term (of which he served three weeks) and a year of probation. Wallace, despite also being found with an unloaded gun in his car and blowing a higher blood-alcohol reading than Rose, was sentenced to a year of probation and a mere 30 hours of community service.

Is it possible that Ben Wallace received a lesser sentence because he was more relevant to the NBA as a current basketball star? No doubt Jalen Rose had a great and expensive lawyer, but as a former player he is that much closer to being an ordinary citizen, without a corporation hovering over him to save the day and protect their interests. The NBA as an institution and a business holds a lot of power and could sway a lighter sentence for a star player like Wallace.

It’s a global issue. In 2015, Australian rugby player Karmichael Hunt was “fined $30,000, suspended for six weeks, and stripped of his vice-captaincy by rugby union authorities after pleading guilty to drug charges.” Even though he had more than 12 grams of cocaine in his possession, he was not convicted for his drug-related offending and managed to keep his record squeaky clean. Karmichael had no priors, entered an early plea, showed remorse and implicated a few other sports stars to make a deal. As a result he was shown leniency by the magistrate who considered the fact that a criminal record would stunt his career and his ability to play internationally.

In 2005, NASCAR driver Kurt Busch was cited with reckless driving after being pulled over for various traffic infringements and suspected drunk driving. At the time he refused to take what he called a “gay-ass” field sobriety test.

Busch later made a plea deal and got a fine of $580 plus seven gay-ass points on his license, and was sentenced to 50 hours of community service. But here’s the questionable part: unlike for you or I, the form of community service for famous athletes is often chosen by the athlete’s manager or sports club, with little oversight from judicial staff.

For his community service, Busch signed autographs for a fundraising event, and threw out the first pitch for an Arizona Diamondbacks vs. San Francisco Giants game. Poor guy, really feeling for him. This is a fairly common way for athletes to do their community service. He also donated $10,000 worth of baseball equipment to a local recreation league in Arizona, and paid for and filmed a public service advertisement.

That’s doesn’t sound like the kind of community service a regular citizen would undergo. Where is the trash picking and elbow-grease graffiti removal? It’s hard to deny that sports stars get off easy, but it is interesting to stoke the fires by asking what really benefits society more – Kurt Busch picking up a can of Mountain Dew you pegged out the window last week, or donating $10,000 of sports gear to a community that would have to sell a mountain of home-baked cupcakes to even see a slice of that dough? For non-violent criminal offenses, is it acceptable for athletes to pay their way out if it benefits youth development in the community? Could you bear the thought of different punishment for different classes if there is a positive social outcome? Is criminal sentencing more about punishing an individual or improving society?

Another way pro athletes typically reduce their sentences is when their lawyers cite extra-curial punishment, meaning the athlete has already undergone additional penalties that come from being in the spotlight. Excessive media coverage, loss of employment and public humiliation fall under the umbrella of extra-curial punishment, resulting in a lighter sentence by the court for renowned athletes. In further special treatment tactics, it’s also common for athletes to be segregated from the general prison population for their own protection, because their public profile exposes them to additional dangers in custody.

The judicial system is skewed and malleable whether it’s for star athletes or regular joes. Considering race and class divides, and according to each judge’s natural bias, one can’t pretend for a second that criminal sentencing is fair across the population. When it comes to sport, the issue of fairness seems to balance more on this question: what level of leniency can you tolerate when reading about the court proceedings of a pro athlete in the daily news? Has the verdict satisfied your schadenfreude or left you short? Your level of indignation could well be tied to factors like which team that athlete plays for, or whether you happen to think they are guilty.

Could you tolerate that same level of leniency if it was you on trial? These sentencing flexibilities are built into the legal system – can we hold that against the athlete, or their lawyers, who are paid to get their client the best outcome? It’s a very human response to try to escape punishment any way you can. Yours truly here once cried at an airport counter after missing a flight in order to get a cheaper ticket. And it worked. You use whatever tools at your disposal to minimize your own discomfort. It’s likely you or someone you know has been given leniency by the law in the past. Maybe your Oscar-worthy recount of why you did x and y worked. Perhaps your bribe went down well. Maybe you’re related to someone with influence. Maybe the officer thought you were pretty, or a stand-up guy, or was just in a good mood.

Is it fair that athletes get lighter sentencing? One hundred per cent not. Is it understandable? Kind of.

If there is a moral double standard when it comes to the behavior of athletes, we may tolerate immoral actions more than we think. As Freakonomics author Stephen J. Dubner explains, we often see cheating in sports merely as an extension of the competitive spirit. When an athlete cheats to win — whether through doping or match fixing — we secretly revere them, says Dubner, because their regard for winning defies official rules and public opinion. When an athlete cheats to lose, however, we are merciless in response (see: Pete Rose). It is unclear whether our respect for the competitive spirit, even if it transgresses moral boundaries, extends to athletes’ behavior off the court or field, but it is clear that athletics occupy a special place in our justice system and moral thinking.

From time-traveling billiard balls to information-destroying black holes, the world’s got plenty of puzzles that are hard to wrap your head around.
Up Next
Surprising Science

Though those of the mother have been researched, the father’s biometrics are now getting a closer look.