When it comes to climate change, ExxonMobil is among the topmost emitters of greenhouse gases globally. It was recently fingered as one of 100 companies worldwide who together contribute 71% of the gases causing global warming. A colossus many times the size of its predecessor, Standard Oil, ExxonMobil is the world’s largest oil and gas company today and the third largest corporation in the world. Yet, it may be its very own investigations into climate change that’ll bring it down… or at least cause it to diminish in size over time.

The attorney’s general of New York and Massachusetts are looking into whether ExxonMobil misled the public over the impact of its products on the environment. For now, it looks as though company lawyers have tied things up for a while. They’re currently engaged in legal wrangling in a Texas court over discovery (the Securities & Exchange Commission is investigating the company as well).

Two years ago, website Inside Climate News and the Los Angeles Times reported that the corporate behemoth has known since at least 1982 (and some say 1977) that global warming was occurring and would significantly impact world populations. The multinational invested heavily in research to find out what was going on in order to preserve its business model and profitability. 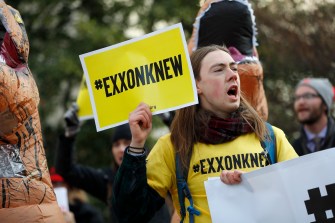 Rather than come clean or diversify its holdings, these articles claim that the company chose to sow climate denial among the public instead. ExxonMobil of course denies this. Two Harvard researchers, Geoffrey Supran and Naomi Oreskes, decided to investigate. They got a hold of 187 company documents generated between 1977 and 2014.

These included peer reviewed and non-peer reviewed research papers on climate science, internal documents, and paid “advertorials,” in The New York Times, running between 1989 and 2004. Supran and Oreskes’ peer-reviewed analysis was published recently in the journal, Environmental Research Letters.

Here’s the kicker: Harvard investigators found that the documents existed on a sort of spectrum. The more these papers were accessible they were to the public, the more doubt they raised about climate change. 81% of paid advertisements in TheTimes cast doubt on global warming, with only 12% admitting it was real.

Yet, “83% of peer-reviewed papers and 80% of internal documents acknowledge that climate change is real and human-caused,” study authors wrote. Researchers say that on the one hand, ExxonMobil contributed heavily to the advancement of climate science, “by way of its academic publications.” On the other hand, it instilled doubt through advertorials.

Prof. Oreskes is a science historian and coauthor of the book Merchants of Doubt, which shows how a handful of scientists with political connections, misled the public on the dangers of DDT, tobacco, climate change, and other issues, over the course of four decades. It’s since been made into a documentary.

ExxonMobil may have followed the same strategy with climate change as Big Tobacco with cancer. The tobacco industry eventually faced racketeering and conspiracy charges, racking up billions in fines. ExxonMobil may someday face a similar fate. 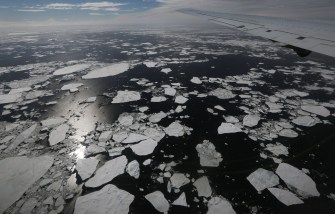 Documents show ExxonMobil knew about the breakup of the Antarctic ice sheet since at least the early 90s. Getty Images.

A 1997 advertorial reported, “Nations are being urged to cut emissions without knowing either the severity of the problem – that is, will Earth’s temperature increase over the next 50–100 years? – or the efficacy of the solution – will cutting CO2 emissions reduce the problem?” Supran and Oreskes have shown that company officials knew exactly how severe global warming was, 10-20 years before running such ads.

The world’s biggest gas provider says that it’s been a great contributor to climate science. It even posted the papers used in the study on its website, challenging the public and press to “read the documents.”Today, it does acknowledge that climate change is real. The company even urged President Trump not to pull out of the Paris Climate Agreement. Despite this pivot, its past stance isn’t going to be forgiven so easily.

Besides states and the SEC looking into past practices, the gas giant is also facing a class action lawsuit by investors, who say it inflated its stock price by not taking climate change, a liability, into consideration. There’s also the matter of “stranded assets.” Climate change has reached a tipping point. Widespread acceptance is making certain projects untenable, and so those assets have become unrecoverable. Some say this also over-values the company.

Exxon also faces internal pressure. Two-thirds of shareholders in May passed a motion to produce an annual climate change report, over executives’ wishes. Today, Prof. Oreskes says, their narrative has changed to fit this new reality. Now, the company says they’re concerned about climate change. But for now they claim, fossil fuels remain are our only reliable energy source.

Related
Health
New blood types are often discovered following medical disasters
New blood types are regularly discovered by an unusual absence or an unusual presence — both of which can result in tragedy.
The neuroscience of loving music
Humans are musical animals four million years in the making, explained by music expert Michael Spitzer.
▸
8 min
—
with
Michael Spitzer
Life
Scientists use CRISPR to insert an alligator gene into a catfish
Disease kills off 40% of farmed catfish. This gene protects them.
Neuropsych
How you breathe affects your brain
Your breathing rhythm influences a wide range of behaviors, cognition, and emotion.
Health
What happens when regular porn watchers abstain for a week?
Researchers watched for signs of withdrawal — but didn’t find any.
Up Next
Surprising Science
For the First Time Tiny Robots Treat Infection in a Living Organism
Scientists from the department of NanoEngineering at the University of California San Diego were able to successfully use chemically-powered micromotors to deliver antibiotics in the gut of a mouse and […]