A new DNA study gravely illustrates the extent of the demise Native American populations suffered due to the arrival of Europeans. The large-scale study consisted of researchers reconstructing a genetic history of indigenous populations in the Americas by sequencing whole mitochondrial genomes extracted from bone and teeth samples of 92 pre-Columbian mummies and skeletons, each between 500 and 8600 years old.

The study revealed a complete extinction of early American natives after the arrival of the Spanish in late 1400s. ”Surprisingly, none of the genetic lineages we found in almost 100 ancient humans were present, or showed evidence of descendants, in today’s Indigenous populations,” says joint lead author Dr Bastien Llamas, Senior Research Associate at Adelaide’s Australian Centre for Ancient DNA (ACAD), which led the study.

He added that ”the only scenario that fit our observations was that shortly after the initial colonisation, populations were established that subsequently stayed geographically isolated from one another, and that a major portion of these populations later became extinct following European contact. This closely matches the historical reports of a major demographic collapse immediately after the Spaniards arrived in the late 1400s.”

What happened to the first Americans?

The atrocities carried out by the conquistadors and subsequent European arrivals are becoming more well-known. But their war practices and brutal ambitions were not the main reason for the utter decimation of the local populations. While estimates vary, a recent consensus places the figure of Native Americans living at the time near Columbus’s arrival at around 54 million. According to previous studies, nearly 95% of them are believed to have been killed by European diseases, like smallpox. 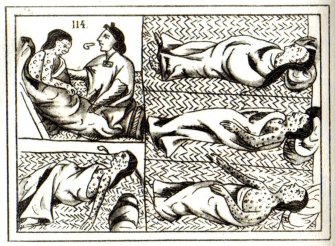 While the role diseases played was previously theorized, the new DNA study provides concrete evidence of the extent to which the diseases affected the first people of the Americas. Europeans brought with them domestic animals and thousands of years of building up immunity to all manner of common illnesses due to living in more densely populated areas and extensive travels. Native Americans largely lacked such immunity and quickly spread the diseases in catastrophic numbers.

On the other side, one of the New World diseases contracted and spread widely by Europeans among themselves was syphilis.

Support for the Bering Strait Theory

Another noteworthy conclusion of the ACAD study is that it provides additional evidence and an improved timing of how the early people settled Americas. The study supports the “Bering Strait theory” whereby migrants came via the Beringian land bridge that linked Asia and the northwestern tip of North America in the land Ice Age. These people lived for 2400-9000 years on the land bridge in an isolated environment, surrounded by icy deserts. This isolation influenced their unique genetic diversity that was used as a point of comparison in the study.  Eventually, however, they started to move south.

“Our genetic reconstruction confirms that the first Americans entered around 16,000 years ago via the Pacific coast, skirting around the massive ice sheets that blocked an inland corridor route which only opened much later,” explained Professor Alan Cooper, Director of ACAD. “They spread southward remarkably swiftly, reaching southern Chile by 14,600 years ago.”

The study was published in Science Advances. You can read it here.

A nearby, infant star teaches us how planets began to form