On the second ever Earth Day in 1971, the Ad Council—responsible for public service announcements, along with the nonprofit Keep America Beautiful, put out an ad called, “People Start Pollution, People Can Stop It.” It became popularly known as “The Crying Indian” commercial. One of the most famous ever made, the scene opens with a Native American man paddling his canoe upriver. The water is strewn with trash. Litter also lines the riverbank. While in the background, smoke stacks spew black soot into the air.

He walks to the highway’s edge, where a passing motorist throws a bag of garbage at the man’s feet. The camera pulls in to a close-up of his face and a single tear rolls down his cheek. The narrator chimes in, “People start pollution; people can stop it.”

Iron Eyes Cody was the so-called “Crying Indian.” Although he was actually of Italian-American descent, the commercial and the new spreading consciousness of what was then called “ecology,” helped clean up America’s air, water, and land, and made people more environmentally conscious.

As such, the idea that indigenous peoples can help us reconnect with nature and care more about the environment, so as to better safeguard it, isn’t a new one. There’s another aspect, too. Since they’re so dependent on the ecosystems which they inhabit, indigenous peoples, besides being the most knowledgeable about the land, are also the most vulnerable to pollution and climate change. 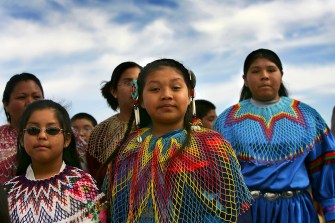 Indigenous peoples may be in a unique position to help manage climate change. Their also the most impacted by it. Credit: Getty Images.

Indigenous peoples all over the world are being significantly impacted by global warming. In the Himalayas, less glacial ice means less runoff which long-term, threatens windswept populations clinging to the roof of the world. In the Kalahari Desert of Africa, water loss has made herdsman dependent on government bore holes to water their cattle. This is only a short-term solution.

In the arctic, the dwindling of seal, walrus, polar bear, and caribou populations are threatening Inuit food supplies. While, the Saami herders in Finland, Norway, Russia, and Sweden have seen their reindeer populations plummet. The reason, they no longer have clear access to the lichen they depend on for food, and many are falling through thinning ice during their annual migration. In the Amazon, the loss of rainforest to savannah is threatening the livelihoods of traditional forest dwellers. These are just a few examples.

Fortunately, there are just as many stories of hope. Since 2008, indigenous representation and participation in international environmental conferences has skyrocketed, as has activism and political engagement. The new Indigenous Peoples’ Pavilion at COP 23, planned and operated by the International Indigenous Peoples Forum on Climate Change (IPFCC), is a testament to this.

Such populations are also evolving with climate change. Native groups in Canada and the US are seizing on economic prospects such as renewable energy. The winds that go howling over the Great Plains for instance, could be a great resource for wind energy. Carbon sequestration on tribal lands is another aspect under consideration.

In South and Central America and the Caribbean, settlements are altering their lifestyle to avoid adverse climate-related conditions. In Guyana for instance, indigenous savannah land has been abandoned by native peoples for forest dwellings, to avoid drought. They’re also planting cassava—their staple crop, on floodplains, which are usually too wet, but not with the rising temperature, not anymore. In Vietnam, mangrove forests are being planted to protect vulnerable communities from tropical storms. While in Bangladesh, indigenous peoples are growing floating vegetable gardens to produce food, even during floods. 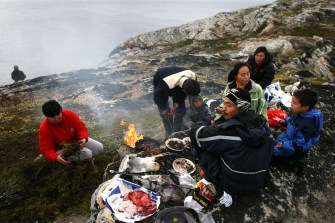 On another front, at least 25% of the places where carbon is naturally captured, such as rainforests, are in the hands of indigenous peoples. Their deep knowledge of the ecosystem they reside in, could make them the best candidates for environmental stewardship and even lend fresh insight into how to battle climate change, according to a Swedish funded initiative.

At a recent Thomson Reuters Foundation event, the head of Sweden’s international development agency, Carin Jämtin, told attendees, “Indigenous people often live and work from forests, land, and water in different ways and they use them in a sustainable way because they need to survive. That’s why we must use the knowledge of those who know how to sustainably use nature.”

Research has shown that when indigenous people are allowed to manage forests, deforestation rates drop. The sad part is, their often dismissed as “primitive.” Very few countries have allowed indigenous peoples autonomy in managing their lands. About 20 of the 200 nations that have signed onto the Paris Climate Accord have. But luckily, there is a growing trend of doing so in the global south. 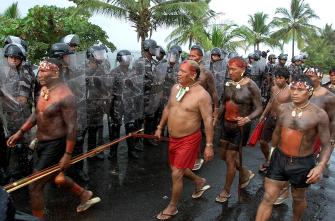 Indigenous people are on the forefront of climate change. Yet, rather than elicit their help, many governments continue to marginalize them. Credit: Getty Images.

Ms. Jämtin went on, “My message to climate change negotiators would be learn from them to avoid causing climate change.” Sweden is part of a consortium that makes up the Global Tenure Facility. Other supporters include the government of Norway and the Ford Foundation. Each member has committed $25 million over the next four years. Officials expect to raise another $50 million, moving forward. This newly minted enterprise seeks to grant rights to indigenous people and help them protect their land.

“This is a groundbreaking initiative because it puts indigenous people and local communities in the driver’s seat,” Ms. Jämtin said. “Land rights matter in different ways, in the fight against climate change, but also … in eradicating poverty and in reaching the [United Nations’] Sustainable Development Goals.”

Related
Strange Maps
The horrors of World War II air war, in one stark map
This graph shows how badly German cities were hit by Allied bombing raids.
Hard Science
Subatomic ghosts shed new light on the structure of protons
A Fermilab study confirms decades-old measurements regarding the size and structure of protons.
The Present
The Taoist philosophy behind Alibaba, China’s e-commerce giant
Alibaba has played a key role in China’s meteoric economic rise.
The Well
Can we condition ourselves to be heroes?
Neuroscientist Robert Sapolsky on the science of temptation, and the limitations of your brain’s frontal cortex.
▸
6 min
—
with
Robert M Sapolsky
Thinking
3 brain games to practice deductive, inductive, and abductive reasoning
Take a closer look at the different types of reasoning you use every day.
Up Next
Technology & Innovation
This Week in Comments: November 6th—November 12th, 2017
From religion to democrats to… Whole Foods. Did you make the cut?