Alexandria Ocasio-Cortez’s stunning primary win in New York’s 14th congressional district over an establishment Democrat as well as her engaging persona have put the word “socialism” back into the conversation. The 28-year-old’s trouncing of Rep. Joe Crowley, a well-connected New York politician who hasn’t faced a primary challenge in 14 years, sent enough shockwaves to warrant the talk that the Democratic party is continually out of touch while unrepresented people are yearning for new voices.

Ocasio-Cortez, a registered member of the Democratic Socialists of America (DSA), has definitely been a strong voice, running unabashedly on a platform that includes Medicare for all, a Federal jobs guarantee (which includes a $15 minimum wage, healthcare and childcare), abolishing ICE, gun control, tuition-free public colleges and trade schools, the end of private prisons and other progressive positions.

A platform that includes so many government services will undoubtedly remind some of socialism, but there’s a crucial difference between democratic socialists and socialists. Democratic socialists do not want the government to own the means of production. They believe in democracy and don’t support authoritarianism. They just think that some social goods like healthcare are universal rights that should be managed by the government. You still get private enterprise and capitalism.

Here’s how Alexandria Ocasio-Cortez explained what democratic socialism means in her interpretation to Stephen Colbert on his “Late Show”:

“I believe that in a modern, moral, and wealthy society, no person in America should be too poor to live,” she said. “What that means to me is health care as a human right, it means that every child no matter where you are born should have access to a college or trade-school education if they so choose it. I think that no person should be homeless if we have public structures or public policy to allow for people to have homes and food and lead a dignified life in the United States.”

Here’s her full appearance on the show:

On the site for the Democratic Socialists of America, they state their political mission this way:

We are socialists because we reject an international economic order sustained by private profit, alienated labor, race and gender discrimination, environmental destruction, and brutality and violence in defense of the status quo.

We are socialists because we share a vision of a humane international social order based both on democratic planning and market mechanisms to achieve equitable distribution of resources, meaningful work, a healthy environment, sustainable growth, gender and racial equality, and non-oppressive relationships.

Now that Ocasio-Cortez won, attention also turned to the reasons why. One most obvious explanation – there are many people much more to the left of the Democratic party leadership. In fact, that gulf was made ever more clear by Nancy Pelosi’s dismissive response to Ocasio-Cortez’s victory – describing it as localized to a district and not representative of any larger trend.

Another Democratic operative, speaking to Yahoo, characterized the divide between the party bosses and new progressive stars –

“I feel like we’re watching Napster all over again, and Dem leadership is like the record industry, refusing to acknowledge what is clearly happening,” the operative said.

The fact is, there well could be a stronger trend at play. The DSA has had its daily membership skyrocket 35% more than on average – the day after Ocasio-Cortez’s win they got 1,152 new signups, according to the Daily Beast. In the Trump era overall, the organization grew from about 5,000 members in November 2016 to 40,000 nationwide in 2018. 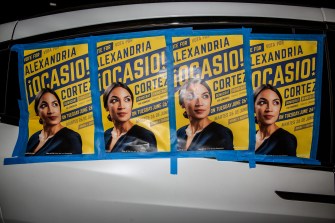 The Democratic Socialists of America has been making inroads even prior to Ocasio-Cortez’s success. In 2017, the group helped elect Lee Carter to the Virginia House of Delegates, and Summer Lee and Sara Innamorato in Pennsylvania, where they both defeated entrenched long-term Democrats.

DSA has also developed the political ground game to help their candidates. Over a hundred of the organization’s volunteers have been canvasing Ocasio-Cortez’s district for months to bring out the votes, knocking on over 13,000 doors.

Bernie Sanders, the most famous recent democratic socialist, has never been a member of the DSA. He was still enthusiastically endorsed by the DSA during his run. Perhaps, by 2020, the DSA can leverage its growth and the enthusiasm of its members (lacking among the Democrats) into supporting a candidate from its own ranks. The group has the potential to become a serious political player.

There are currently few signs that the establishment Democrats would consider running on a far-left platform, fearing an association with anything “socialist” as the plague. But as the lesson of Trump’s takeover of the Republican party shows – doubling down on your issues can create the necessary passion among supporters and bring electoral power. Something else to consider – polls show that over 50% of millenials have favorable opinions of socialism.

Related
The Present
Radical idea: Redraw the U.S. map as a nation of city-states
While cities drive national economic growth, their political geography means they cannot effectively deal with inequality, poverty, and other socioeconomic problems.
The Learning Curve
Why do high IQ people stagnate in their careers? Emotional intelligence
Research suggests that emotional intelligence is more vital for success than IQ.
The Present
Even in the age of AI, some problems are just too difficult for computers
Computers are growing more powerful and more capable, but everything has limits
The Future
How the metaverse will revolutionize K-12 and higher education
Imagine going on a tour through the human circulatory system as a tiny cell. That is just one example of education in the metaverse.
Starts With A Bang
Ask Ethan: What are white holes, and do they really exist?
In General Relativity, white holes are just as mathematically plausible as black holes. Black holes are real; what about white holes?
Up Next
Surprising Science
What is the blood moon prophecy?
As we’ve come to expect, conspiracy theorists and fringe Christian evangelicals are heralding the July 27 blood moon as a sign of the imminent apocalypse. But what is the blood moon prophecy, and why does it appeal to a certain type of believer?