The cost of the Great Recession in terms of productivity and Gross Domestic Product (GDP) will cost everyone in the United States a tidy sum when averaged over a lifetime, finds a new report from the Federal Reserve Bank of San Francisco.

It has everything to do with the slow-down in things like investment and GDP, and how that translates to lost wages and income.

The figure was arrived at through calculations of the actual lowered output that happened as a result of the financial crisis. The GDP was an average of $50,000 per year per person in 2007, and the calculation of lost GDP since then gives researchers this number.

From the report: “This means that, according to our estimates, the 2007–08 financial crisis persistently lowered output by roughly 7 percentage points. This is a large number: In dollar terms, it represents a lifetime income loss in present-discounted value terms of about $70,000 for every American. This simple calculation takes the reading of GDP per person in 2007 (approximately $50,000) and assumes an annual discount rate of 5%.” 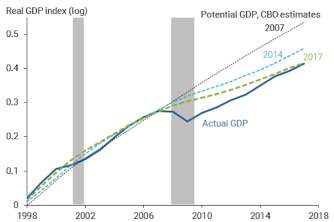 Note: Dashed lines show potential GDP estimated by the CBO in different years, measured in natural log terms, with the 2007 estimate of potential normalized to zero in 1998, such that subsequent changes are measured in fractional terms. Gray bars reflect NBER recession dates. Text and image from the original report.

Figure 2: The effects of the 2007–08 financial crisis: Actual vs. scenario estimates without crisis 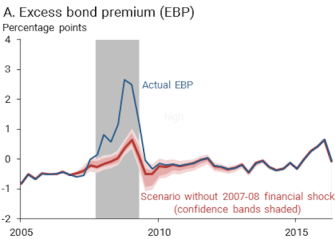 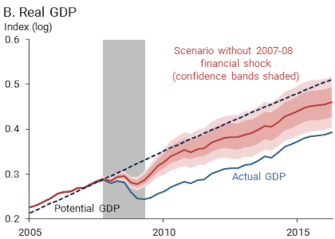 Note: Potential GDP in panel B represents 2007 estimate from Congressional Budget Office. GDP is measured on a log scale so that changes in GDP can be read as percent changes in GDP. EBP estimate is from Gilchrist and Zakrajsek (2012). Text and images fromthe original report.

It remains to be seen if recovery from that dip will ever happen. All signs indicate it is finite, but 10 years after the onset of the crisis, it still hasn’t. Wages remain anemic and the expected benefits of tax breaks for the wealthy haven’t translated to gains for everyday working Americans.

“Without the large adverse financial shocks experienced in 2007 and 2008, the behavior of GDP would have been very different. It would most likely resemble the less severe 1991 recession, with GDP declining by only 1.5% and reverting to close to its pre-crisis trend level in a few years. This behavior is in stark contrast to actual GDP, which has not reverted to its pre-crisis trend level.”

Even if eventual GDP recovery is imminent, there are signs pointing to another big recession in the next few years.

Perhaps it’s time to invest in dollar bills shoved into your mattress?

A study finds that older adults who cannot balance on one foot for ten seconds have an 84% higher risk of death than those who can.
Up Next
Surprising Science

A new paper strengthens the theory that black holes are like balls of space yarn and debunks the idea of “firewalls”.