Rio de Janeiro’s National Museum, Brazil’s most important historic and scientific museum, went up in flames Sunday night. Firefighters fought the fierce blaze through the night, but because the two nearest hydrants were dry, workers had to bring in water from a nearby lake, giving the fire ample time to devour the 200-year–old building. While no one was hurt or injured, an untold number of the museums 20 million artifacts are at risk of being lost to us forever.

“It was the biggest natural history museum in Latin America,” Cristiana Serejo, one of the museum’s vice-directors, said. “We have invaluable collections. Collections that are over 100 years old.”

It is still unknown how the fire began, but several have laid blame on the Brazilian government’s austerity policies and its financial mismanagement, decisions that diverted even basic maintenance funds from the institution—funds that many claim could have fixed the nearby hydrants and building’s sprinkler system.

On Monday, outraged protesters clashed with police as they tried to gain access to the building, and indigenous peoples openly criticized the government for neglecting a building that housed their priceless artifacts, while simultaneously securing the funds to build a brand-new museum.

In light of this tragedy, we take stock of some of the artifacts that may not have survived, and remind ourselves why institutions like Rio de Janeiro’s National Museum are historically, culturally, and scientifically invaluable to us. 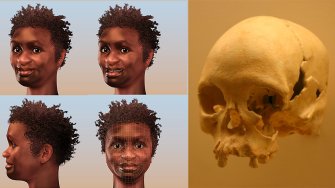 Luzia woman is the nickname given to a nearly 12,000-year-old skeleton, the oldest human fossils found in the Americas. Found in 1975 at Lapa Vermelha, Brazil, Luzia woman was a Paleo-Indian woman from the Paleolithic period, and some archaeologists believe she was among the first wave of immigrants to South America. Her remains are likely unsalvageable.

Ancient mummies—both human and not 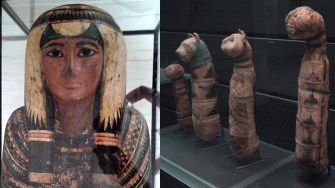 The sarcophagus of Sha-amun-in-su, dated to 750 B.C, and an example of mummified cats from the Louvre in Paris. (Credit: Wikimedia Commons)

The museum housed an expansive collection of Egyptian artifacts, about 700 items according to its Egyptological laboratory website. Among the items was the sarcophagus of Sha-amun-in-su, a present offered to Dom Pedro II by the Khedive of Egypt in 1876. Dating back to 750 BCE, the unopened coffin housed a mummy who belonged to a special group of women that assisted the Amun’s wife during the rituals enacted at the great temple of Amun in Thebes. X-rays also shows amulets buried with her. Other artifacts likely lost include statues, stelae, canopic jars, and mummified cats. 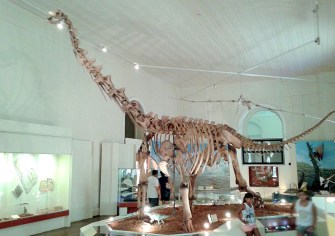 Many fossils and other paleontological finds made their way to the National Museum, but the most popular was probably Maxakalisaurus topai, a late Cretaceous-era uniquely Brazilian sauropod whose life-sized replica stood large in visitors’ imaginations. This species represents one of several titanosaurs discovered in Brazil and was one of South America’s largest dinosaur finds.

Art that survived the eruption of Mt. Vesuvius 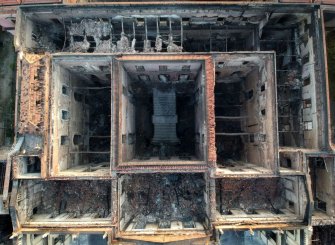 Drone view of Rio de Janeiro’s treasured National Museum, one of Brazil’s oldest, on September 3, 2018, a day after a massive fire ripped through the building. (Photo: MAURO PIMENTEL/AFP/Getty Images)

Like the museum’s Egyptian collection, its Greco-Roman collection consisted of more than 700 items. Most of the items came to Brazil between 1853 and 1859, thanks to Empress Teresa Cristina Maria’s fascination with archeology and her desire to spread Mediterranean culture to the country. Among the collection’s pieces were Italian ceramics from the 4th century BCE and a pair of frescos from the Temple of Isis in Pompei that survived the eruption of Mount Vesuvius. 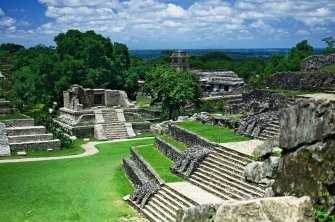 Overview of the central plaza of the Mayan city of Palenque in Chiapas, Mexico. (Credit: Wikimedia Commons)

The pre-Columbian artifacts engulfed by the fires spanned not only centuries but also cultures. The museum housed renowned artifacts from the Inca, Chimu, Moche, Chancay, and Lambayeque cultures. The spectrum spanned textiles, tools, pottery, and ceremonial objects. It even housed the mummified remains of a prehistoric man from the Atacama Desert. Thanks to salts found in the desert’s soil, his body was preserved in excellent condition, allowing scientists to study South American life in those ancient days. 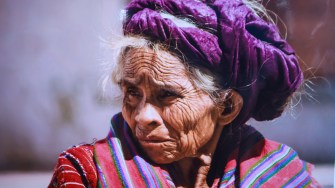 It isn’t just irreplaceable objects that have been lost to us, but also files and important documents. The museum stored audio recordings of many Brazilian indigenous languages. Some of these languages are no longer spoken and may no longer be heard again.

“I have no words to say how horrible this is,” Brazilian anthropologist Mariana Françozo toldNational Geographic. “The indigenous collections are a tremendous loss…we can no longer study them, we can no longer understand what our ancestors did. It’s heartbreaking.” 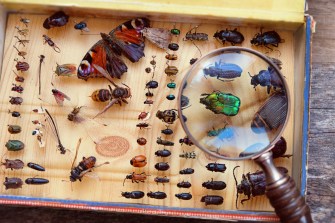 The museum’s Department of Entomology maintained a collection of more than five million arthropod species, the largest in Latin America. The collection focused on neotropical fauna and was considered invaluable thanks to its scope and diversity, which allowed entomologists to study rare and vulnerable species.

Birds that taught the world 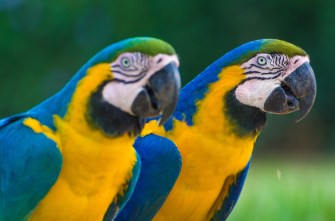 Like its insect collection, the museum’s avian collection played an incalculable role in educating the public on the richness of biodiversity in Brazil’s bird species. Collected over nearly 200 years, the collection contained representatives of each of the orders of Brazilian birds.

The National Museum itself 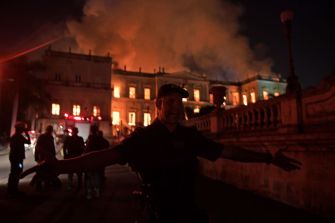 A police officer prevents people from getting near the building as a massive fire engulfs the National Museum in Rio de Janeiro, one of Brazil’s oldest, on September 2, 2018.(Photo: CARL DE SOUZA/AFP/Getty Images)

The building didn’t simply hold world history; it was a piece of that history. The former Imperial Palace housed the Portuguese royal family after they fled to Rio de Janeiro to escape Napoleon, and Brazil’s post-independence emperors used it as a palace until 1889. Collections were transferred to the building in 1902.

As workers continue to sift through the smoldering shell, we still don’t know just how extensive the damage is, but it seems some artifacts have survived.

The Bendegó meteorite, an 11,600 lb iron-nickel meteorite, weathered the inferno. A report on Twitter claimed that some of the museum’s 40,000 mollusk specimens made it through, and the museum’s library, herbarium, and fish and reptile species are thought to be intact, thanks to separate housing. Some metal storage cabinets seemed to have survived, but the condition of the specimens they contain is unknown.

Even so, these are thin silver linings to an otherwise dark cloud that hangs over Rio de Janeiro and many fields of research.

“It is a loss for the world,” a former museum director told NBC News. “It can never be recovered.”

Related
The Present
Radical idea: Redraw the U.S. map as a nation of city-states
While cities drive national economic growth, their political geography means they cannot effectively deal with inequality, poverty, and other socioeconomic problems.
The Learning Curve
Why do high IQ people stagnate in their careers? Emotional intelligence
Research suggests that emotional intelligence is more vital for success than IQ.
The Present
Even in the age of AI, some problems are just too difficult for computers
Computers are growing more powerful and more capable, but everything has limits
The Future
How the metaverse will revolutionize K-12 and higher education
Imagine going on a tour through the human circulatory system as a tiny cell. That is just one example of education in the metaverse.
Starts With A Bang
Ask Ethan: What are white holes, and do they really exist?
In General Relativity, white holes are just as mathematically plausible as black holes. Black holes are real; what about white holes?
Up Next
Starts With A Bang
What Was It Like When The Universe First Made Atoms?
It took hundreds of thousands of years to make atoms for the first time. If things were just a little different, it could have taken an eternity.When it comes to […]