Recent studies suggest that Americans might be the worst research subjects on the planet. As Ethan Watters put it recently, “social scientists could not possibly have picked a worse population from which to draw broad generalizations. Researchers had been doing the equivalent of studying penguins while believing that they were learning insights applicable to all birds.”

I’ll explain why we’re such odd birds in a minute. First, see how you respond to an oft-posed research question.

Imagine this: somebody gives you $100 to share with a person you don’t know. It’s your job to decide how much of the windfall to keep and how much to share, but the stranger can scuttle the whole deal by refusing your offer. That is, you both lose out if your offer — for one reason or another — is distasteful to player #2.

So how much do you offer your counterpart? You want to maximize your take, but you know that if you insult player #2 with a low-ball offer, she may punish you by refusing the pittance and deny you any cash. Keeping $80 or $90 seems quite selfish — and dangerous. A 70/30 split still feels ungenerous. So…60/40? 50/50? Do you even opt to offer your counterpart the slightly better deal (49/51, say) to ensure you don’t lose out on some winnings?

If you’re an average American, and real money is at stake, you will offer a 50/50 split under these circumstances, and if you are player #2, you will refuse offers that are even slightly less favorable than this. The so-called “ultimatum game” shows that we tend to deal equitably with strangers and are quick to avenge people who deal unequitably with us.

In the past couple of decades researchers have noticed that this result may be idiosyncratically American, not an indication of how the rest of humanity behaves under these circumstances. When Joe Henrich took the ultimatum game to Peru and posed the same challenge to an indigenous people known as the Machiguenga, he found very different results:

When he began to run the game it became immediately clear that Machiguengan behavior was dramatically different from that of the average North American. To begin with, the offers from the first player were much lower. In addition, when on the receiving end of the game, the Machiguenga rarely refused even the lowest possible amount. “It just seemed ridiculous to the Machiguenga that you would reject an offer of free money,” says Henrich. “They just didn’t understand why anyone would sacrifice money to punish someone who had the good luck of getting to play the other role in the game.”

The revelation that rural Peruvians handle the ultimatum game so differently from American respondents led Henrich on a MacArthur Foundation-funded research trip to more than a dozen more locales around the world, where he found wide variation in the average offers of player #1 and this curious result: “in some societies — ones where gift-giving is heavily used to curry favor or gain allegiance — the first player would often make overly generous offers in excess of 60 percent, and the second player would often reject them, behaviors almost never observed among Americans.”

These diverse findings shook up a basic assumption of the field of psychology: the idea that “humans all share the same cognitive machinery — the same evolved rational and psychological hardwiring.” And the more Henrich and his colleagues investigated variation among respondents in different parts of the world, the more they saw patterns of oddness in Americans’ perspectives.

Take two examples of visual perception. Which vertical line, (a) or (b), is longer? 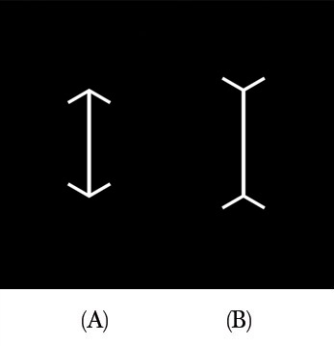 OK, now look at the lines below in the center of each image. Are they vertical?

(Both figures are drawn from Ethan Watters’ article.)

If you are like the typical American test subject, you succumbed “more dramatically” to the length perception illusion in the first question than did respondents from anywhere else in the world: you mistakenly saw the vertical line in (B) as longer, though (A) and (B) are actually the same length. On the other hand, chances are you were not fooled by the “rod and frame task” and correctly saw the lines in both (a) and (b) as vertical.

It seems clear, from a mountain of recent research, that Americans cannot serve as proxies for the rest of humanity when it comes to cognition or reasoning. Henrich and two colleagues argue that people in Western, Educated, Industrialized, Rich, and Democratic (WEIRD) societies “are particularly unusual compared with the rest of the species” in all kinds of ways: “visual perception, fairness, cooperation, spatial reasoning, categorization and inferential induction, moral reasoning, reasoning styles, self-concepts and related motivations, and the heritability of IQ.”

But why are we so dramatically different?

This is where the analysis melts into speculation. Watters describes studies showing that “Western urban children grow up so closed off in man-made environments that their brains never form a deep or complex connection to the natural world.” Confined to urban jungles and starved of nature, children in the United States and other Western, industrialized nations are “developmentally delayed” in understanding “that humans are one animal among many.” They tend to anthropomophize animals until later in childhood — just one effect of their radically different experience with the natural world.

Another cultural distinction some have raised to explain the differential success of respondents on the “rod and frame” task is the degree of individualism found in various societies. Here is how Watters explains it:

[S]ome cultures regard the self as independent from others; others see the self as interdependent. The interdependent self — which is more the norm in East Asian countries, including Japan and China — connects itself with others in a social group and favors social harmony over self-expression. The independent self — which is most prominent in America — focuses on individual attributes and preferences and thinks of the self as existing apart from the group.

…Unlike the vast majority of the world, Westerners (and Americans in particular) tend to reason analytically as opposed to holistically. That is, the American mind strives to figure out the world by taking it apart and examining its pieces. Show a Japanese and an American the same cartoon of an aquarium, and the American will remember details mostly about the moving fish while the Japanese observer will likely later be able to describe the seaweed, the bubbles, and other objects in the background. Shown another way, in a different test analytic Americans will do better on…the “rod and frame” task, where one has to judge whether a line is vertical even though the frame around it is skewed. Americans see the line as apart from the frame, just as they see themselves as apart from the group.

These explanations are, admittedly, a bit of a stretch. They begin with questionable generalizations about entire cultures and then gamely apply these stereotypes to the capacities and perceptual proclivities of individuals. But hey, as long as we’re speculating, another idea comes to mind.

The ultimatum game is similar to a prisoner’s dilemma where two suspects, interrogated in separate rooms, decide to cooperate (by denying any wrongdoing) or defect (by ratting out the other guy) without knowing how the other will act. But where the two parties in a prisoner’s dilemma face the exact same question, the two players in the ultimatum game do not: one proposes a split, the other gets to approve or reject it.

In a nationally televised prisoner’s dilemma, it came as a surprise to many viewers when in the final episode of ABC’s “The Bachelor Pad” last fall, Nick the final bachelor revealed his decision to keep the entire $250,000 rather than share it with Rachel, his winning bachelorette. Since Rachel had opted to share the sum, she ended the series in tears and with a mouth full of expletives, without a dime of winnings. (Had she too chosen “keep,” both contestants would have walked away empty-handed; but had he opted for “share,” they would have split the pot.) What’s interesting is not so much one guy’s selfish decision but the rah-rah reactions Nick’s choice spurred. “I am siding with Nick,” David Jacoby declared. “Who knew I’d walk away from a season of Bachelor Pad feeling satisfied?” Jeff Ford wrote. And Mark Lisanti reviewed the finale by capturing America’s individualist ethic: “there can only be one.”

Is it possible that Americans applauded this bolder-contestant-takes-all result because they too, deep down, would like to be slick Nick? Do we offer 50/50 splits in the ultimatum game only because we fear vengeance from player #2? Does our peculiar strategy in this experiment paint us as more equitable or more cunningly self-serving than our fellow human beings abroad?

There is certainly more work to be done trying to understand the strange ways Americans tend to deviate from individuals in other countries. But whatever the cause, the crux of the matter is clear, and sobering: we’re odder than we think.

Related
Neuropsych
How you breathe affects your brain
Your breathing rhythm influences a wide range of behaviors, cognition, and emotion.
Health
What happens when regular porn watchers abstain for a week?
Researchers watched for signs of withdrawal — but didn’t find any.
Neuropsych
Daily caffeine intake temporarily alters your brain structure
Compared to people who took a placebo, the brains of those who took caffeine pills had a temporarily smaller gray matter volume.
Thinking
Why you should laugh at yourself, according to Seneca and Nietzsche
“It is more human to laugh at life than to lament it.”
Hard Science
The violence of the Tonga eruption is a wake-up call to watch other submarine volcanoes
Out of sight, but not out of mind.
Up Next
Surprising Science
Electronic Implant Controls Appetite and Weight Gain
A team of British researchers will soon begin testing an electrical device which, by attaching to a nerve that controls the body’s appetite for food, could provide an alternative to weight-loss surgery.