While it’s had its share of misses, American foreign policy also produced some concrete successes in the years since World War 2 and it’s possible to be hopeful.

It’s also true that the U.S. has continued to stay involved in world affairs militarily. The wars it has been involved in have been pursued for strategic reasons and proved generally unsuccessful. Outmaneuvering and outlasting the Soviet Union, American diplomacy has kept the mainland in relative peace—perhaps truly shattered by 9/11.

What have been some of the most important accomplishments of recent U.S. diplomats? Here are the top 5:

The Marshall Plan was an American initiative to rebuild Western Europe after World War 2. It consisted of $13 billion in economic aid to prop up destroyed European economies. The plan was signed into action by President Truman on April 3rd, 1948, and was named after Secretary of State George Marshall, who proposed the rebuilding assistance.

The plan indeed jump-started the European economy, spreading the American goodwill and earning it allies among former enemies, like Italy and Germany. The U.S. also put billions into the reconstruction of Japan.

The Marshall plan inhibited the spread of communism and essentially created the relationship that the U.S. and Western Europe enjoyed until President Trump. 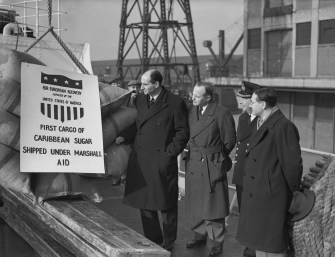 3rd February 1949: Dignitaries, from left to right, Mr. Strachey, Mr. Holmgreen (Marshall Aid Representative), and Dr. W Kling (Assistant Agricultural Attache) at the Royal Victoria Dock in London to welcome the first shipment of Caribbean sugar made under the Marshall Plan of US aid for Europe. (Photo by Edward Miller/Keystone/Getty Images)

While the Treaty on the Non-Proliferation of Nuclear Weapons, known as the Non-Proliferation Treaty or NPT, was a major international effort, the impetus behind it came from U.S. foreign policy. The treaty, initially negotiated between 1965 and 1968, with a number of countries signing in later decades, can be credited with keeping the world from exploding in a nuclear war.

The treaty’s objective is the prevention of the spread of nuclear weapons and weapons technology while promoting cooperation for peaceful uses of nuclear energy. Its ultimate goal is complete nuclear disarmament.

The initial push for nuclear non-proliferation can be attributed to a December 1953 ‘Atoms for Peace‘ proposal by the U.S. President Dwight D. Eisenhower, presented to the eighth session of the United Nations General Assembly. In the proposal, he called for an international organization to be established for the spread of peaceful nuclear technology while preventing the development of weapons capabilities in new countries. Eisenhower’s proposal led to the establishment of the International Atomic Energy Agency (IAEA) in 1957, which has the dual responsibility of facilitating and controlling nuclear technology. 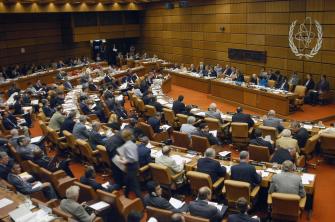 General view of the International Atomic Energy Agency board of directors meeting, 16 June 2003 in Vienna. The IAEA chief Mohammed El Baradei urged Iran to sign an additional protocol to the nuclear Non-Proliferation Treaty (NPT) to allow the IAEA to inspect all suspect sites, not just those declared by Tehran. (Photo credit: DEAN CALMA/AFP/Getty Images)

The opening to China

According to Harvard University’s Professor of International Relations Stephen M. Walt, President Nixon’s 1972 decision to end the “long U.S. ostracism of China” was equally “a major event in modern diplomacy and a smart geo-strategic move,” says Walt. It laid the groundwork for future relations with China, placed pressure on the Soviet Union, and helped the U.S. exit the Vietnam War.

While in current global circumstances, President Trump is keen on blaming China for a trade imbalance while engendering a trade war, at its time, Nixon’s policy was seen as correct and successful. 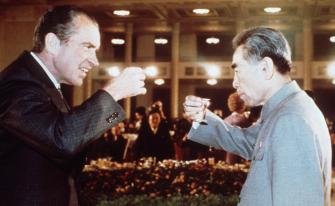 The reunification of Germany

The first Bush administration was instrumental in the relatively smooth process of reunifying Germany in 1990 as the Soviet Union was collapsing. The result? Germany is the powerhouse economy of Europe and one of the world’s leading countries. 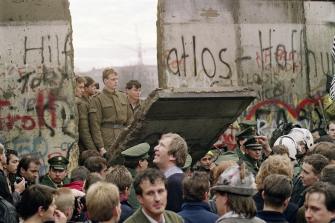 West Berliners crowd in front of the Berlin Wall early 11 November 1989 as they watch East German border guards demolishing a section of the wall in order to open a new crossing point between East and West Berlin, near the Potsdamer Square. (Photo credit: GERARD MALIE/AFP/Getty Images)

One of the most iconic moments of the past century occurred on June 12th, 1987, when President Reagan gave the “Tear down this wall!” speech in Berlin, proclaiming: “Mr. Gorbachev, tear down this wall!” This subsequently led to the wall’s destruction and German unification during the next administration.

In November 1995, the Dayton Agreement for Peace in Bosnia and Herzegovina ended a 3.5-year-long Bosnian War. It was signed in Dayton, Ohio, following negotiations led by the U.S. Secretary of State Warren Christopher, negotiator Richard Holbrooke, and General Wesley Clark. 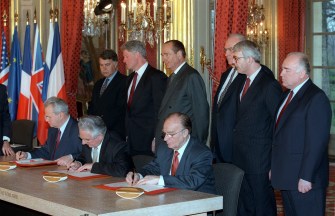 For the very first time, an AR contact lens was worn on the eye of a human subject. And it has about 30 times the pixel density of an iPhone.
Up Next
Sponsored

Startups create the tech and products that set the tone for our collective future. It’s pivotal that founders lead by example to make diversity and inclusion a priority—and reap the rewards.