“I have stated my concerns with Amazon long before the Election,” the tweet reads. “Unlike others, they pay little or no taxes to state & local governments, use our Postal System as their Delivery Boy (causing tremendous loss to the U.S.), and are putting many thousands of retailers out of business!”

The tweet came one day after Axios reported that sources close to Trump said he’s “obsessed with Amazon.” Amazon shares dipped after the report, and after Thursday’s tweet.

Trump, according to the Axios report, has been talking about “changing Amazon’s tax treatment because he’s worried about mom-and-pop retailers being put out of business.” The president thinks Amazon gets a “free ride” from taxpayers, and his wealthy real estate friends tell him that the online retailer is killing their shopping malls and other brick-and-mortar businesses, which affronts Trump’s “old-school businessman” ethos that “sees the world in terms of tangible assets: real estate, physical mail delivery, Main Street, grocery stores.”

What the president is most likely criticizing is how Amazon often doesn’t have to collect sales tax when customers buy products from third-party sellers that operate on its website. Some think this gives Amazon an unfair advantage. What’s more, states and municipalities stand to gain between $8 and $13 billion in annual revenue if they required online retailers to collect sales tax, regardless of whether they have a physical presence in the state of sale, according to the Government Accountability Office. 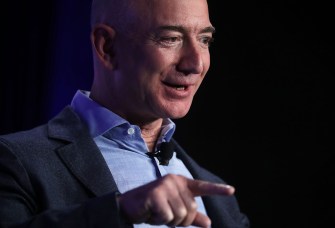 The U.S. Supreme Court is set to hear arguments on April 17 in a case that could reverse a 1992 decision which states that retailers not based in the state of sale don’t have to collect that state’s sales tax.

The president also thinks Amazon gets “cushy treatment” from the U.S. Postal Service. It’s a view he expressed in a tweet last December.

Why is the United States Post Office, which is losing many billions of dollars a year, while charging Amazon and others so little to deliver their packages, making Amazon richer and the Post Office dumber and poorer? Should be charging MUCH MORE!

Vox published a piece in response to the tweet outlining how the USPS’s parcel services, the part of the agency that ships Amazon packages, are “doing okay”and that the USPS loses billions of dollars each year mainly because of declining revenue from first-class mail and high labor costs.

“The whole post office thing, that’s very much a perception he has,” a source told Axios. “It’s been explained to him in multiple meetings that his perception is inaccurate and that the post office actually makes a ton of money from Amazon.”

Trump and Jeff Bezos, who owns The Washington Post, have locked horns several times in recent years. In 2015, Trump tweeted “The @washingtonpost, which loses a fortune, is owned by  @JeffBezos for purposes of keeping taxes down at his no profit company, @amazon.”

Bezos responded: “Finally trashed by @realDonaldTrump. Will still reserve him a seat on the Blue Origin rocket. #sendDonaldtospace”

Related
Starts With A Bang
The quantum reason why neutral atoms first formed
If it weren’t for the intricate rules of quantum physics, we wouldn’t have formed neutral atoms “only” ~380,000 years after the Big Bang.
Hard Science
Some earthquakes last for seconds, others for minutes — and a few for decades
What do you call it when the Earth shakes for three decades?
Sponsored
What childhood “money story” is shaping your financial behaviors?
Here are the signs that you inherited “money anxiety” from your parents.
The Present
The “maritime Indiana Jones” who salvages shipwrecks now wants to tow icebergs
Simple physics makes hauling vast ice chunks thousands of miles fiendishly difficult — but not impossible.
Neuropsych
Inside the brains of aging dogs
In a citizen science project, thousands of pet dogs are helping scientists to understand what happens to memory and cognition in old age.
Up Next
Technology & Innovation
A new tooth-mounted sensor will soon help you lose weight
Although there are many advantages, it could be problematic for one particular group of people.