When you enter the voting booth on Tuesday and pull a lever or jab a touchscreen for Mitt Romney or Barack Obama, you will be registering a vote not only for president but for the ideological tilt of an institution that will likely have more influence on your life over the coming decades: the Supreme Court.

Of the nine justices, four are in their seventies. Justice Ruth Bader Ginsburg, a pancreatic cancer survivor, turns 80 next March. Justices Scalia, Kennedy and Breyer (representing the right, the center and left of the Court) are 76, 76 and 74, respectively. The next president will likely have the opportunity to appoint at least one justice, and if Romney wins and is re-elected in 2016 may appoint one, two or three more.

But it won’t take four appointments for the next president to have a lasting impact on the Court and its role in the American political landscape. It’s amazing to recall that the third-longest serving justice, Clarence Thomas, was a tender 41, Paul Ryan’s age today, when he was appointed by the elder President Bush in 1991. Today, Justice Thomas is only 63. He will become the longest serving justice in American history if he can outlast Justice William O. Douglas, who served for 36 years.

It is astonishing that the Court has not been a bigger issue in this campaign. The issue came up in few ads and in only one debate: the vice presidential contest between Joe Biden and Paul Ryan. Here is how the exchange went:

MS. RADDATZ: I want to go back to the abortion question here. If the Romney-Ryan ticket is elected, should those who believe that abortion should remain legal be worried?

VICE PRESIDENT BIDEN: The court — the next president will get one or two Supreme Court nominees. That’s how close Roe v. Wade is.

I guarantee you that will not happen. We picked two people. We picked people who are open-minded. They’ve been good justices. So keep an eye on the Supreme Court —

There was really no clash of views here: both Ryan and Biden argued, in different terms, that Roe v. Wade would be doomed under a Romney administration. In claiming that the people, not “unelected judges,” are the appropriate arbiters of the abortion controversy, Ryan meant this: there should be no constitutional right to choose to have an abortion. Roe v. Wade should be overturned and the issue should be returned to the states, where legislators would be free to ban abortion should they choose to.

Some have projected that more than half of the 50 states would do just that. Here is how the patchwork would likely emerge. Women in the dark blue states would have access to abortion, while the vast light blue swaths of the midwest and the south would not; the numbers indicate the average number of miles women in each state would have to travel to reach an abortion clinic: 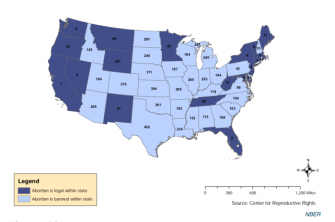 It’s not just abortion rights on which the Supreme Court has the last word, of course. Same-sex marriage, racial equality, the texture of freedom of speech and the separation of church and state are just a few more life-changing issues the Court has addressed and will address again in the coming years and decades.

I am not of the opinion that Obama and Romney are fundamentally similar choices. Despite the little daylight that exists between their foreign policy stances and their incremental differences on some budget matters, the men do seem to have quite distinct values and philosophical perspectives on the role of government. They are wide apart, to my mind, on character. These differences would be felt by all Americans.

But the most significant divide between the candidates concerns the justices they would pick for the Supreme Court. This is the factor that should be foremost in your mind at the polls on Tuesday.

ChatGPT’s capabilities are astonishing.
Up Next
Culture & Religion

For years, highly-skilled Indians traveled to the States to build businesses, but now the flow is reversing, with young Americans creating a variety of startups on the subcontinent.