Two very special macaque monkeys were born recently at the Chinese Academy of Sciences, located at the Institute of Neuroscience in Shanghai. These were cloned monkeys born from the same technique which gave us Scotland’s Dolly the sheep in the 1990s. The two female monkeys, one named Zhong Zhong and the other Hua Hua, are the first primates ever to be cloned using an advanced method, and the implications are vast.

Zhong Zhong is the older sister, born eight weeks ago, while Hua Hua is just six weeks old. The two are in all ways identical. The monkeys’ names come from the Chinese word “Zhonghua,” which means the Chinese people or nation. The monkeys were created using a method known as somatic cell nuclear transfer (SCNT). Scientists achieved this feat by removing the nuclei from monkey egg cells and replacing them with nuclei from differentiated body cells.

Each then became a clone of whatever cell its nucleus came from. The new cells which eventually would become Zhong Zhong and Hua Hua, were encouraged to develop into embryos and were then inserted into the wombs of surrogate mothers to gestate. The results were two healthy macaque babies and a paper published in the journal Cell.

Researchers foresee this as an avenue to better study primate physiology, with a particular eye toward the diseases they share with humans. Such uniform clones could be useful for medical research and might even ramp up the development of new treatments for a range of diseases, including Alzheimer’s, Parkinson’s, and even cancer. Turns out, mice aren’t the best stand-ins for us.

For instance, all the recent Alzheimer’s medications that looked promising in mouse models haven’t been effective in our species. Macaques, being much closer to us, could give a better indication as to whether or not new drugs would be effective in humans. 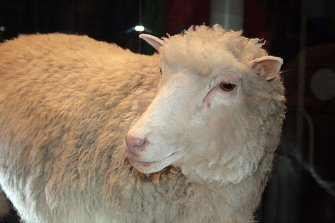 Dolly the sheep was cloned at the Roslin Institute in Midlothian, Scotland in 1996. She died in 2003. Dolly not only launched a renewed interest in cloning but also the ethical debate surrounding it. Credit: Toni Barros from São Paulo, Brazil, Wikimedia Commons.

Qiang Sun is the Director of the Nonhuman Primate Research Facility at the Chinese Academy of Sciences Institute of Neuroscience. He’s also the senior author of the paper. He said in a press release:

“There are a lot of questions about primate biology that can be studied by having this additional model. You can produce cloned monkeys with the same genetic background except the gene you manipulated. This will generate real models not just for genetically based brain diseases, but also cancer, immune, or metabolic disorders and allow us to test the efficacy of the drugs for these conditions before clinical use.”

What researchers don’t mention is that it brings an ever-encroaching specter closer to reality: human cloning. Mu-ming Poo, Director of the Institute of Neuroscience at the Chinese Academy of Sciences, told NPR:

“Technically speaking one can clone [a] human. But we’re not going to do it. There’s absolutely no plan to do anything on humans.”

These are technically the first primates ever cloned: in 1999, a “cloned” rhesus monkey named Tetra was born, but she was created through a less sophisticated method called embryo splitting or artificial twinning. Although it mimics the natural process through which twins are born, embryo splitting can only create four offspring at a time, limiting its usefulness, while this latest breakthrough allows for a near limitless production of clones. SCNT has up until now, proven difficult to achieve in primates. Twenty-three species, including rats, cats, dogs, and cows, have all been created, but primate cells proved resistant.

These researchers overcame the hurdle by introducing what they called epigenetic modulators. Epigenetics is the system by which genes are activated or suppressed. Researchers found that after the transfer of nuclei, if they turned off the genes that inhibited embryo development they could successfully produce a clone. Their success rate further increased when the nuclei of fetal differentiated cells were used, such as fibroblasts—an important cell found in the connective tissue. Fetal cells are much easier to reprogram than adult cells, scientists have found. 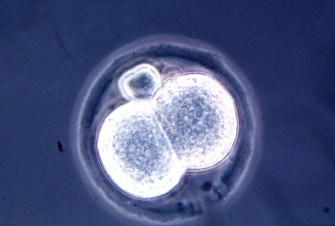 Researchers experimented with several different methods, but only one proved successful. Adult donor cells for instance, created clones that only survived a few hours after being born. Zhong Zhong and Hua Hua, made from the same macaque fetal fibroblast, are developing normally. Although some scientists question how long they will last. Over the coming months, Dr. Sun and colleagues are planning to develop more clones and further improve the technique.

Muming Poo was a co-author on this study. “The SCNT procedure is rather delicate, so the faster you do it, the less damage to the egg you have, and Dr. Liu (a colleague) has a green thumb for doing this,” Poo said. “It takes a lot of practice. Not everybody can do the enucleation and cell fusion process quickly and precisely, and it is likely that the optimization of transfer procedure greatly helped us to achieve this success.”

The researchers say they followed the strictest of ethical standards, as set forth by the U.S. National Institutes of Health (NIH). “We are very aware that future research using non-human primates anywhere in the world depends on scientists following very strict ethical standards,” Poo said.

The implication is that this takes us one step closer to the ethical morass that is human cloning. It’s currently illegal to conduct human cloning in many countries around the world. These researchers have actually called on experts to weigh in and debate what practices should and shouldn’t be acceptable in the realm of primate cloning.

Related
13.8
What kind of intelligence is artificial intelligence?
The initial goal of AI was to create machines that think like humans. But that is not what happened at all.
The Present
What’s effective altruism? A philosopher explains
Some effective altruists “earn to give” — they make as much money as they can and then donate most of it to charities.
Sponsored
How to avoid family fights about money
No family is immune to money conflicts, no matter how much they love each other. Here’s what to look out for.
L&D strategy
Best practices for a needs analysis [Templates included]
Conducting a thorough needs analysis requires care, curiosity, and open-mindedness.
Neuropsych
Memory and the benefits of forgetting
Forgetfulness isn’t always a “glitch” in our memories; it can be a tool to help us make sense of the present and plan for the future.
Up Next
Culture & Religion
Why collective narcissists are so politically volatile
Research from my PrejudiceLab at Goldsmiths, University of London shows that people who score high on the collective narcissism scale are particularly sensitive to even the smallest offences to their group’s image.