Being an American president is a job of historical significance. Unlike most mere mortals, you are sure to be remembered for centuries and while you are in office you are the most powerful person on Earth. It is also a position that’s highly stressful—many a president has gone grey while in office, not just from old age, but thanks to the constant crises that tend to erupt all over the world that are in some way the president’s responsibility.

Being a president can also kill you, with over a quarter of all American presidents suffering assassination attempts. There have been over 30 attempts in all on the incumbent or former presidents since the 1800s.

Here are the four times assassination attempts succeeded in their grim intents:

One of the country’s greatest, the 16th President of the United States was shot on April 14th, 1865 by John Wilkes Booth. Lincoln was attending a play at the Ford’s Theater in Washington, D.C. when Booth, a popular actor of the day and a Confederate sympathizer, entered his balcony and shot him in the head. The next day, April 15th, Lincoln died.

The president who abolished slavery and led the country through a terrible Civil War was killed five days after the surrender of Robert E. Lee and the Confederate Army of Northern Virginia. He was in the process of instituting a generous policy of reconciliation to unite the divided nation. 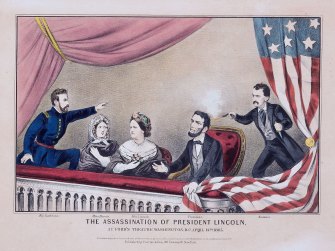 The assassination of Abraham Lincoln. 1865. A hand-colored lithograph on paper by Currier & Ives Lithography Company. The lithograph shows the scene on the night of April 14, 1865, when Lincoln was attending the play “Our American Cousin” at Ford’s Theatre, accompanied by his wife and their guests, Major Henry R. Rathbone and his fiancée, Clara Harris. On that evening, the guard who was assigned to the president left his post, and John Wilkes Booth was able to enter Lincoln’s private box and shoot him.

The 20th president of the United States was shot on July 2nd, 1881 in Washington, D.C., just four months into his presidency. He succumbed to his injuries and died on September 19, 1881.

The reason Garfield was killed? His shooter was one Charles J. Guiteau, who was deemed insane by his family a few years earlier. He became obsessed with the notion that President Garfield owed him a position in the government for his supposed help during the electioncampaign. When no such post materialized and he was, in fact, rebuffed by the Washington insiders, Guiteau’s growing mania led him to shoot the president.

The 25th president was shot on September 6th, 1901, while attending the Pan-American Exposition in Buffalo, New York. He was meeting the public at the Temple of Music when an anarchist named Leon Czolgosz shot him twice in the stomach. Eight days later, on September 14th, 1901, the president died from a gangrene that resulted due to his wounds.

McKinley was in his second term when he was assassinated. He was actually warned about an assassination attempt specifically at the Temple of Music by his Secretary George B. Cortelyou, who took the visit off the president’s schedule twice. But McKinley restored it every time, leading to the terrible turn of events. After McKinley’s assassination, Congress passed legislation to charge the Secret Service with protecting the president. 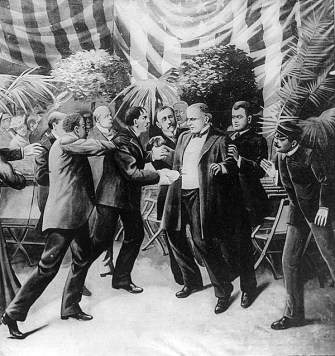 Part of a wash drawing by T. Dart Walker that shows the assassination of President McKinley by Leon Czolgosz on September 6, 1901.

America’s 35th president was assassinated on November 22nd, 1963 in Dallas, Texas. He was riding in a presidential motorcade with his wife Jacqueline Kennedy (later Onassis) as well the Texas governor John Connally and his wife Nellie when he was shot. The governor was also seriously wounded in the attack, carried out by a former U.S. marine Lee Harvey Oswald.

After being shot, President Kennedy was rushed to the Parkland Memorial Hospital where he died 30 minutes after the incident. The sudden loss of the idealistic and promising President Kennedy, a descendant of one of America’s most powerful families, was an extremely traumatic event for the country. This was especially influenced by the fact that despite investigations, like the Warren Commission, the assassination has never been satisfactorily explained for many Americans, spawning numerous prominent conspiracy theories. Kennedy’s assassin Lee Harvey Oswald was himself killed a couple of days later, on November 24th, 1963 by a Dallas nightclub operator named Jack Ruby.

Besides the assassination attempts that achieved their aims, there were a number of other dangerous attacks on U.S. presidents. Here are some of the recent ones:

George W. Bush faced an attempt on his life in 2006, during a rally in Tbilisi, Georgia, held jointly with then-Georgian President Mikheil Saakashvili. As reported by The Washington Post, a Georgian nationalist threw a live grenade at the presidents and their staff. Luckily, it failed to detonate.

Bill Clinton had several brushes with assassination plots against him. In 1994, one Frank Eugene Corder flew his single-engine airplane onto the White House lawn. He crashed through a magnolia tree and stopped close to the Clintons’ bedroom.

In 1996, Osama bin Laden reportedly tried to kill Clinton via a bomb planted under a bridge during his trip to Manila.

On March 30th, 1981, President Reagan was fired at six times by John Hinckley Jr., a man who looked to impress the actress Jodie Foster by that act. Reagan eventually recovered from his chest wound, but his press secretary James Brady was partially paralyzed after one of the bullets hit his head.

Here’s that incident caught on tape:

On May 5th,1979, a transient was arrested at the Civic Center Mall in Los Angeles, carrying a .22 caliber start pistol. This happened ten minutes before President Jimmy Carter was supposed to give a speech there. What’s more, the transient turned out to be part of a more elaborate plot where two Mexican hit men were supposed to shoot the president with rifles.

President Gerald Ford lived through back-to-back attempts on his life during the September of 1975. During a rally at a park in Sacramento on September 5th, a Manson family member drew a gun at Ford as he reached out to shake people’s hands. Fortunately, the gun misfired and was grabbed by a Secret Service agent.

Just a few days later, on September 22nd, a radical shot at the president in San Francisco. The shot missed thanks to a bystander who grabbed the shooter’s arm.

Related
Neuropsych
Daily caffeine intake temporarily alters your brain structure
Compared to people who took a placebo, the brains of those who took caffeine pills had a temporarily smaller gray matter volume.
Thinking
Why you should laugh at yourself, according to Seneca and Nietzsche
“It is more human to laugh at life than to lament it.”
Hard Science
The violence of the Tonga eruption is a wake-up call to watch other submarine volcanoes
Out of sight, but not out of mind.
The Present
How circular economics can make us happier and less stressed
Entrenched business wisdom says that community-led economic systems are pure fantasy. Douglas Rushkoff disagrees.
The Learning Curve
The art of asking the right questions
The right questions are those sparked from the joy of discovery.
Up Next
Surprising Science
NASA’s Parker Solar Probe launched today. Its mission? ‘Touch’ the sun.
The Parker Solar Probe is the first time a spacecraft will ever get this close to the sun.