In January 2018, Attorney General Jess Sessions announced that the U.S. will abandon the Obama-era principle of allowing states to determine the legal status of marijuana within their boundaries. From here on in, according to long-time marijuana opponent Sessions, it seems state laws don’t matter: It’s illegal, period. Sessions has a long history of being against pot, telling Newsweek that it’s only “slightly less awful” than heroin, and endorsing a bill that called for the death penalty for anyone selling drugs including marijuana when he was Attorney General of Alabama in 1996. First spoiler: Marijuana is nothing like heroin. Second spoiler: Sessions is not alone in having strong opinions about marijuana, whether or not they’re justified by actual facts. Archstone Recovery Center recently queried 1,000 Americans about grass and legalization, and their findings are intriguing, and sometimes eye-opening.

(All of the infographics in this article are from Archstone Recovery Center.)

Who Wants to Legalize It and Who Doesn’t?

The first thing to find out is who’s voted to legalize grass in their state, and who’s voted against it. It hasn’t been on the ballot everywhere — it’s legal in some form in 36 states as of January 2018, Sessions notwithstanding — and so the amber data in the infographic below essentially shows the percentage of respondents who haven’t had a chance to weigh in. It’s the green and red that are the most interesting. 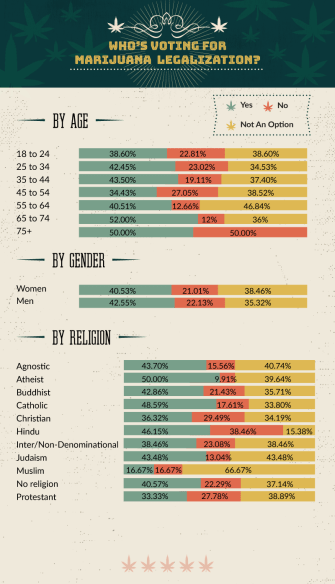 Maybe the most surprising takeaway here is that those most in favor of legalization are in the 65 to 74 age bracket. Is this because they’re boomers, many of whom have had, ahem, personal experience with grass? The least enthusiastic are millennials: their kids! Hm.

No shocker that atheists are most likely to be the kind of unfettered spirits that want pot legalized, but Catholics are second?

People who want to see legalization expanded, or not, give their reasons here:

People against legalization don’t seem to harbor very strong feelings in this survey. The two top reasons for wanting grass to stay illegal are tied at 15.52%: Fears that it’s a gateway drug, or that it’s dangerous for kids. Sessions would be in the 8.86% who think it’s dangerous and addictive (it’s not addictive from a scientific point of view). As far as being dangerous goes, that’s a vague claim, though plausible if you’re including causing a slower reaction time when driving high, which is presumably still illegal everywhere. (The boomer adage is that drinkers drive too fast and tokers drive too s-l-o-w.)

People who want it legalized know why, and they apparently have multiple reasons. In one of the research’s most dubious findings, it would appear that concern for state economies is top-most in the minds of legalization advocates — you have to wonder if that’s really just the top excuse offered. This is followed by the defensive “it’s not that bad as drugs go” and the shrugging “it can’t be successfully controlled anyway,” if we may paraphrase. Then come the three, probably most genuine, reasons.

Who Should Control Pot’s Legal Status? 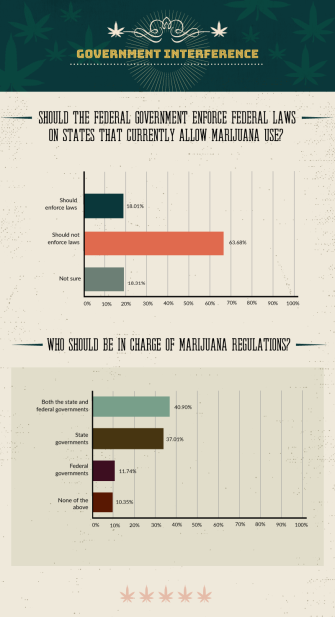 AG Sessions no doubt doesn’t care, but most people, by a large margin, think the Feds should respect state laws on this. On the other hand, they’d slightly prefer to see state and federal regulatory agencies work together, another thing Sessions apparently has little use for.

Effects of Legalization on the Economy and Society 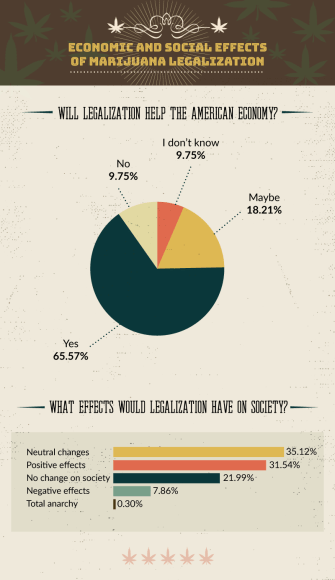 Echoing our top excuse above, a whopping 65.57% of those surveyed believe legalizing grass would boost the economy. O-kay.

Its effects on our American society are more split. And 0.30% of respondents expect legalization to induce total anarchy, which seems suspiciously like “No change on society” to some of us.

First off, those surveyed considered grass no worse than cigarettes and alcohol. This presumably includes even those who would still vote to keep it illegal. 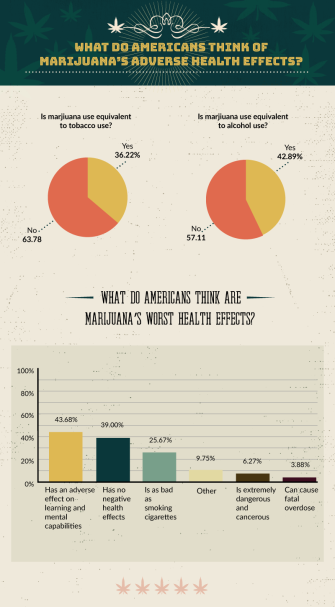 Doing research for the recent Big Think article comparing marijuana and alcohol, it became clear that there’s a possibility grass is believed to be the more benign of the two simply because it’s been studied so much less. That being said, there have been zero marijuana-overdose deaths, period, so that 3.88% of folks are just wrong. On the other hand, actual scientists at the Centers for Disease Control do have concerns about marijuana’s health effects, so we’ll have to wait and see.

Sessions’ announcement certainly adds a new level of confusion to what’s already been a baffling overlay of jurisdictions and opinions. These infographics at least document the state of American opinion on legalization at the moment its Attorney General decided his opinion is the one that counts.

Related
3 game theory tactics, explained
How to maximize wins and minimize losses, explained by four experts on game theory.
▸
7 min
—
with
Kevin Zollman
Health
When’s the best time to consume caffeine? Hint: Not right after you wake
Get the most out of your coffee.
Starts With A Bang
The quantum reason why neutral atoms first formed
If it weren’t for the intricate rules of quantum physics, we wouldn’t have formed neutral atoms “only” ~380,000 years after the Big Bang.
Hard Science
Some earthquakes last for seconds, others for minutes — and a few for decades
What do you call it when the Earth shakes for three decades?
Sponsored
What childhood “money story” is shaping your financial behaviors?
Here are the signs that you inherited “money anxiety” from your parents.
Up Next
Strange Maps
Nobody Lives Here: Mapping Emptiness in the U.S. and Beyond
Did you know the U.S. is actually almost half empty?