Scientists, science-minded citizens, and others have been appalled by what some claim is the Trump Administration’s “War on Science.” Besides stepping away from the Paris climate accords, officials appointed to important positions such as head of the EPA Scott Pruitt and Dept. of Energy Secretary Rick Perry, are a testament to the administration’s attitude towards science. Pruitt challenged the EPA in court 14 times before taking his current position. While Perry has publically stated that fossil fuels actually save lives.

Environmental research has been defunded. And other actions have raised concern. Recently, a US Forestry scientist was blocked from speaking at the International Fire Congress by the Trump administration, about how global warming is affecting forest fires. The week previous, three climate scientists were barred by the EPA from attending a Rhode Island talk about climate change. And these are just the most current examples. 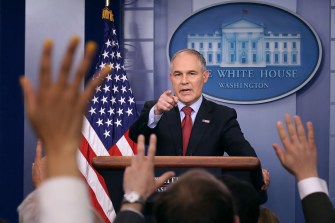 This isn’t just coming from the White House. It’s a systemic problem. Scientists are woefully underrepresented in Congress. To date, there’s only one practicing scientist in that branch. Lawyers, career politicians, and business people make up the lion’s share. Then there’s the practice of science. Taking a year off to raise money and campaign takes time away from the lab, making one essentially obsolete. Science is too demanding a master and running for office too time consuming, in addition to being laborious and expensive. Meanwhile, many law firms encourage members to take time off to run for office.

Another problem is a prevailing view among the STEM community that science is pure and politics is tainted. They’d rather rise above and leave politics to others. Now, one organization seeks to get scientists to enter the fray or at least get involved. It’s called 314 Action.

This is a 501(c) 4 grassroots organization based in Washington, D.C., founded by scientists. They support candidates’ campaigns financially through donations, offer a training program for those new to the process, promote science, and increase public engagement with the STEM community. 314 is of course a reference to PI, an irrational number we’re surrounded by constantly, whether we know it or not.

I got to talk to 314 Action founder Shaughnessy Naughton recently about her organization. Ms. Naughton was originally a breast cancer researcher, a chemist. Fed up with congress, she herself became a candidate for Pennsylvania’s 8th district in 2014. “Ultimately, I did not win the primary,” she said. “But what I learned was there is a real lack of people with scientific backgrounds in elected office.” Naughton went on, “I founded 314 to get the scientific community to go beyond advocacy and get involved in the electoral process, whether that’s run for office themselves or support fellow scientists that are.” 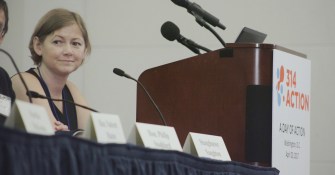 Her fundraising skills in the 2014 primary were impressive. She cobbled together a network of scientists and STEM professionals all over the country. At the end of her campaign, her sign up list included 50,000 names. Since January, an additional 200,000 have voluntarily signed up to receive newsletters, updates, and invitations, for what is now 314 Action. Naughton said, “I hear from scientists all the time and the common refrain is, ‘I have to do something.’”

The nonprofit is financed completely through small donations. It’s on track to raise $5-7 million for the upcoming election cycle, 2018. “This year it’s resonating with folks beyond the scientific community,” the founder said. Moreover, over 7,000 in the STEM community have reached out to run for office. Not all of them are running this year or next, however.

Also, federal positions aren’t the only aim. “There are a lot of things that have to be done on the state and local level,” Naughton said. If this past election was any indicator, good fortune may be coming their way. Just last Election Day they saw 17 of their endorsed candidates make it into office. They are as follows: 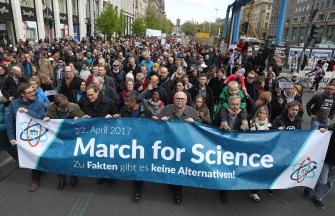 I asked if Ms. Naughton tried to reach out to the Republicans. “We have not,” she said. “There is a reality of electoral politics, especially at the federal level, you’re forced to pick a side.” Though their situation looks good, 2018 is the real litmus test. “We made a special push for scientists to run for school boards,” she said.

I asked if that focus was to counteract a push for Creationism or to omit climate science from school curriculums. She said that’s part of it but there’s more. “Refusing to teach accurate health science. Not putting a priority on teaching science and the scientific method. The list goes on and on. And some of their attacks have gotten very cute. It will be difficult to combat them other than through the electoral process.”

314 has also set up a hotline for scientist at federal agencies who are considering whistle blowing. It’s part of what’s called the Scientific Integrity Whistle blower Project. The phone number leads to the law office of Bernie Sanders’ general counsel for the 2016 campaign, Brad C. Deutsch. He’s doing it pro bono. They only launched on Nov. 3 and already they’ve had two calls. Those considering whistle blowing Naughton said “might not know what legal avenues they have for reporting malfeasance. So we set up the hotline.”

To learn more about 314 Action and their candidate training program, click here:

Related
Life
Strange life forms create an “alien” ecosystem in an abandoned uranium mine
Slimy biofilms made up of bacterial and eukaryotic life forms have taken over an abandoned, flooded uranium mine in Germany.
Hard Science
Earth has an eerie “sodium glow,” and astronomers use it to image stars
Air currents in our atmosphere limit the resolving power of giant telescopes, but computers and artificial stars can sharpen the blur.
Health
How saliva changes the flavor of food
“It’s a liquid, but it’s not just a liquid.”
High Culture
Why are flood myths so common in stories from ancient cultures around the world?
Could the prevalence of flood myths around the world tell us something about early human migration or even the way our brains work?
The Future
Space travel will radically change human psychology and spirituality
We are traveling in a realm that once exclusively belonged to the gods. Space travel will force humanity to rethink everything.
Up Next
Surprising Science
Study Claims Quark Fusion May Be the Energy Source of the Future
Scientists propose that quark fusion may be an energy source eight times more powerful than nuclear fusion.