The US Congress recently worked out a deal on a short-term spending bill to avoid a looming government shutdown. Though the legislative body is majority Republican, remarkably, no funding was set aside for President Trump’s border wall. Building a wall on the US-Mexico border was one of his signature issues during the 2016 presidential campaign.

The border wall is on hold, for now. That debate may be taken up again in the fall. With the dramatic polarization in the country, the debate surrounding the proposed beefing up of the border wall is likely to go on for quite some time. So how can we cut through the ideology? One way is to look back through history and see what lessons can be garnered.

How successful have border walls been historically? We have the Great Wall of China, Hadrian’s Wall, and the West Bank Wall, to name a few of the most famous ones. Did they really keep out those they were meant to, or did they add expense and backbreaking work, with little to show for it? 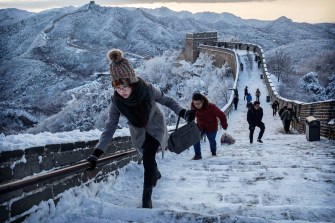 Once meant to keep out foreign invaders, the Great Wall is now a tourism boon. Getty Images.

The Great Wall of China is the largest military structure in the world. Its winding dragon’s tail totals in length approx. 13,000 miles (20,000 km). Despite the myth, you cannot see it from space. Begun in the 3rd century BCE, the wall was meant to keep out nomadic warrior bands from the north, mostly from Manchuria.

It was added upon over the centuries, with one particular growth spurt taking place in the 17th century. I’ve been to the Mutianyu section. It’s just a spectacular work of engineering. But like most things wondrous, it has a dark underbelly. It’s a massive graveyard.

The wall was mostly built with the labor of slaves and prisoners. Those who died due to the harsh working conditions often had their bodies thrown in with the mortar, becoming part of the structure itself. The roasting temperatures and barren landscape on the US southern border will also make the work there exceedingly difficult and slow-going, should it begin. But no one’s expected to die.

With China, the Manchurians were able to get behind the wall and conquer the country in 1644, overthrowing the Ming dynasty and establishing the Qing, which lasted up until the early 20th century.

As a history major my Chinese Civilizations professor, Dr. Ken Olenik, told us that the Great Wall was never able to keep out invading armies. They usually either found a way through or paid off the guards at the gate. China is benefiting from the wall today, however. It draws over 10 million tourists per year. 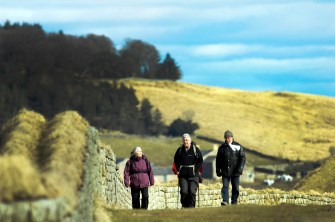 Hadrian’s wall has also become something of a tourist draw. Getty Images.

The Romans build Hadrian’s Wall, named after the emperor who decreed it, in the second century CE. It runs across Northern England and was meant to keep the Picts at bay. These were an ancient tribe who would later become the Scottish. Brutal warriors, during battles hordes of Picts were known to come screaming out of the forest, running naked, painted blue, howling battle cries while waving their axes in a mad onrush toward the enemy. This doubtless shook even the most seasoned legionnaire.

Hadrian’s Wall is 73-miles long. It was manned for 300 years. 5,000 Roman infantrymen built the wall, supported by auxiliary units. Historical evidence shows that the wall was breached dozens of times. For instance, around 180 CE a Roman general and some troops were taken out by a raiding party from the north.

After the fall of the Roman Empire in early 5th century the wall was abandoned, and its stone used as a quarry over the centuries to form parts of castles, churches, barns, and other structures. This lasted up until the 19th century, when archaeological efforts came to preserve the wall. Today, it’s another tourist destination, with some even hiking its entirety as a meditative exercise. 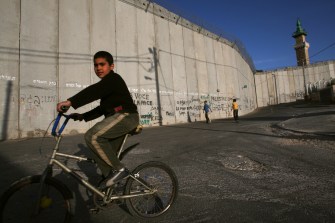 For a more modern reference, the West Bank Wall was built by Israel in 2002. The Prime Minister at the time, Ariel Sharon, was looking to protect the country from Palestinian suicide bombers. However, the 435-mile structure cuts the West Bank completely off from other Palestinian areas, which some call a human rights violation. As a result, the Palestinians refer to it as the “Berlin Wall” or “Apartheid Wall.”

The structure is 435 miles long (700 km). It has 26 foot (8 meter) high concrete walls in some places. When I was there in the mid-2000s, the part I saw was a 6 foot (1.8 meter) high electronic fence. The world court has condemned the wall as a “land grab.” Palestinians say the wall has claimed a significant portion of their territory. Because of the legal and political issues surrounding it, it has never been fully completed.

So how successful is it? There has been a sharp decline in the number of attacks since the wall was built. It has helped, Israeli security officials’ state. Yet, there were a lot of other contributing factors that have decreased attacks, such as Hamas putting a moratorium on suicide bombings, the second intifada waning, and several Israeli military operations in the West Bank clearing out many of the militants there. Still, around 60,000 Palestinians illegally cross the barrier each day, in order to find work in construction, agriculture, or the service industry.

Berkeley’s Wendy Brown says that walls may be more about a projection of power than an actual, physical, defensive structure. This projection gives the illusion of security. In that sense, Trump may be using the wall more as something to rally people around, as the ancient Chinese did. Building a wall in this sense is more a subconscious reaffirmation of national identity than a way of providing security.

To learn more about border walls and the issues surrounding them, click here:

A scientific debate isn’t about changing the minds of those watching to agree with you, but rather about identifying what evidence will allow everyone to know the right answer for […]