In this episode: Death, Bob Marley, parenthood, gratitude, and what to do in the face of incalculable suffering. These are just a few of the topics raised in this episode’s vulnerable, searching discussion with Tony, Emmy, Obie, and two-time Golden Globe award-winning actress and author Mary-Louise Parker.
She’s won many awards — Tony, Obie, Golden Globe, Emmy — for her roles in the Showtime series Weeds, the TV miniseries of Angels in America, and the play Proof, among other things. Unbeknownst to many people until now, she’s also a seriously talented writer. Her first book, Dear Mr. You, is a series of letters to men, real and hypothetical, living and dead, who have had a meaningful impact on her life.

off on a conversation about the limits of empathy, the power of music, and the fact that likability is way overrated. 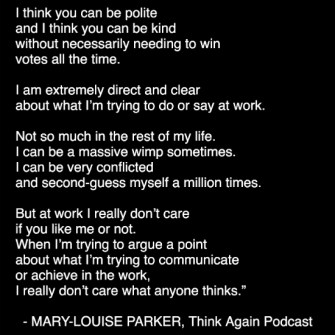 “Salvator Mundi” sold for a record-breaking $450 million in 2017, but is it really as valuable as people were led to believe?
Up Next
Technology & Innovation

Google has announced final design plans for the first modular smartphone, the project Ara. However, Dave Hakkens, who nurtured this idea for a modular device, isn’t happy with the final product.