In this episode:
Kate Tempest
is a force of nature. She won the coveted Ted Hughes award for her epic poem Brand New Ancients, which she toured internationally as a stage show to massive critical acclaim. Her novelistic 2014 rap album Everybody Down takes hip-hop in entirely new directions. And with 2016’s The Bricks That Built the Houses, she has reworked these ideas into a deeply moving and powerful novel (her first) about four friends in her native South London.
Our conversation starts here, with the challenges and discipline of novel-writing and travels through deep and personal territory, as Kate talks passionately about art and the human heart in our “tragic and troubling times” with host Jason Gots.

NOT TO BE MISSED: Kate’s breathtaking, spontaneous poetic monologue at the very end of the show. 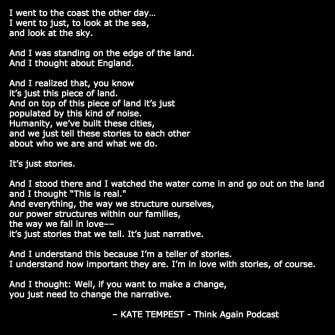 Surprise discussion clips in this episode: Augusten Burroughs on writer’s block and William Shatner on science and imagination.

TIX only $10 and going fast! Come join us! Our guest is Tony and Obie-award-winning Playwright, Sarah Jones.

The Universe begins with negligible amounts of angular momentum, which is always conserved. So why do planets, stars, and galaxies all spin?
Up Next
Starts With A Bang

Could a new type of supernova eliminate dark energy?

A game-changing supernova in the galaxy Messier 101, observed in 2011. Image credit: NASA / Swift.They’re judged to be “standard candles” and the greatest cosmic distance indicators. What if they’re not […]