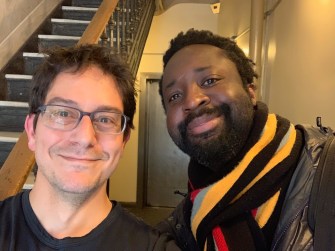 Marlon James with host Jason Gots after the taping.

At this point, it’s very rare to read something and find myself thinking: This is something new. This is unlike anything I’ve ever read before. It doesn’t have to be written in hieroglyphs or be some kind of three-dimensional interactive reading experience with pull-out tabs and half the pages upside down. That kind of formal experimentation, in my experience as a reader, more often ends up being gimmicky and annoying than exhilarating. In fact, paradoxically, the “wow this is something new” experience often comes along with a sense that this new thing has somehow always existed, in your dreams if nowhere else.

Marlon James—the Jamaican writer who won the Man Booker Prize for A Brief History of Seven Killings— has done something in his new fantasy novel Black Leopard, Red Wolf that’s unlike anything I’ve ever read before. The first book of a trilogy, it’s been described as an “African Game of Thrones” and likened in scope to Tolkien’s Lord of The Rings. But the stories within stories it tells and the shifts in voice and perspective thrust you into a seething, hallucinatory, morally ambiguous world that’s part Ayahuasca dream and part blacklight nightmare, anchored in a rich African mythology that’s worlds away from all those elves, wizards, dragons, and goblins—all those well-worn tales of light versus darkness.

Surprise conversation-starters in this episode:

Jeffrey Sachs on whether Jeff Bezos should distribute his Amazon wealth

Damian Echols on tattoos as a lifeline

The fruits of long-term thinking will reveal themselves in five or ten or 30 years, when you’ve created the future you’ve always wanted.
Videos

Astrophysicist Michelle Thaller explains how a solar storm could wipe out civilization… and what we can do to prevent catastrophe.
▸
5 min
—
with
Michelle Thaller
13.8

The Copernican principle states that Earth is an ordinary planet, but that does not mean that life is ordinary in the universe.
High Culture

The Russian writer’s scorn went beyond a difference in taste; Leo Tolstoy virulently hated everything Shakespeare had come to stand for.
Up Next
Health

3 of the most speculative benefits of the keto diet