Why Don’t Poison Frogs Die from Their Own Neurotoxin?

The results of this study may help scientists devise new drugs for pain and nicotine addiction. 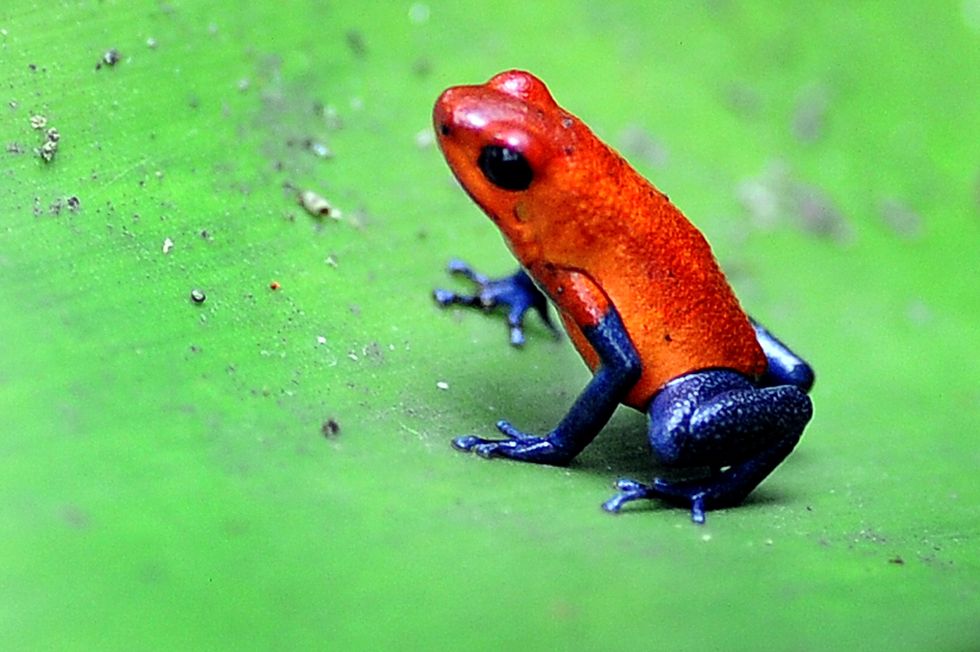 Poison frogs carry some of the most dangerous neurotoxins on the planet. Native to South America, there are hundreds of varieties and among them, dozens of neurotoxins. Over 800 compounds have been discovered within such frogs. Yet, only 70 of these are well understood.

The most dangerous in the world, the Colombian golden poison frog (Phyllobates terribilis), packs enough toxin to wipe out 20,000 mice. What’s been a long running mystery is why these frogs don’t poison themselves. Now, a group of scientists have found out. And the answer may help us develop better treatments for nicotine addiction and chronic pain.

Scientists at the University of Texas at Austin conducted the study. Their research surrounds a subgroup of poison frogs who use a toxin called epibatidine. It’s close in composition to morphine. If you could take one frog, squeeze all of its epibatidine into a glass and feed it to a water buffalo, the thing would drop dead. The poison gives these frogs a clear advantage over predators.

The Colombian golden poison frog, the most dangerous in the world. They’re very rare, endangered, and live on the Pacific coast of Colombia. Credit: Getty Images.

The amphibians don’t produce the toxin themselves. Instead, they eat certain mites or ants (the source is unknown) which are themselves poisonous. The frog secretes the toxin out of its own skin. Poison is so advantageous from a survival and evolutionary perspective that biologists wonder why more creatures don’t have them. What UT researchers found was that not every organism can build up a resistance.

Rebecca Tarvin is a postdoctoral researcher at UT Austin. She was the co-first author of the study. “I’ve been wanting to understand how organisms could acquire neurotoxins, [which] requires an animal to reorganize their nervous system,” she said. “It almost seems unlikely that something like that would evolve.” Tarvin worked with professors David Cannatella and Harold Zakon on the project. Their results were published in the journal Science.

The neurotransmitter acetylcholine in these frogs and the toxin epibatidine bind to the same receptor on a nerve cell’s membrane. A receptor is basically a lock. If the right compound fits into the receptor, it’ll open. With poison frogs, a genetic mutation has altered the receptor just slightly. It’s different enough so that epibatidine can’t enter, but similar enough so that acetylcholine can. Genetically speaking, the alterations are very subtle. But it’s occurred three times in the frog’s evolution thus far, proving that these changes are beneficial to survival.

Poison frogs literally had to reorganize their nervous system in order to carry their toxin. Credit: Getty Images.

The scientists began by collecting 28 species of frogs from the wild. Some had epibatidine, others had other toxins, and some were non-toxic. They sequenced the gene that encodes for the acetylcholine receptor in each species. Then each was compared to the frog’s evolutionary tree to see how it evolved over time.

Since we also carry them, the scientists took the frog’s acetylcholine receptors and applied them to human cells. They compared the DNA. Of the 2,500 amino acids that makeup the receptor, only three had changed. One neutralized the poison’s effects by altering the receptor just enough so that the toxin couldn’t fit.

When this change first occurred, the frog didn’t remain unaffected. Its nervous system slowed down. Then other amino acids were altered to compensate for this loss in reaction time, allowing acetylcholine to flow freely again, and so restoring normal neurotransmission. Unearthing such a biochemical process is very rare, according to herpetologist and toxinologist Zoltan Takacs. He told National Geographic the discovery offered “a very rare insight into how evolution works and how neurobiology works.”

The alteration in the shape of these receptors may hint at new ways to address disease. The same receptors are altered in humans in cases of chronic pain or nicotine addiction. With the opioid painkiller epidemic raging and widespread chronic pain prevalent, medical researchers have been looking for a non-addictive painkiller that’s safe and effective.

Epibatidine has been one possible candidate mulled over. This new information may help scientists mold it into a safe, non-addictive painkiller. The more we understand how receptors interact with substances useful pharmacologically, the more novel medicines we can develop. Certainly, poison frogs are just one example of the biochemical wilderness left out there for scientists to explore.

To learn more about the science behind venomous creatures, click here: