The correlation is more prominent in women than men. 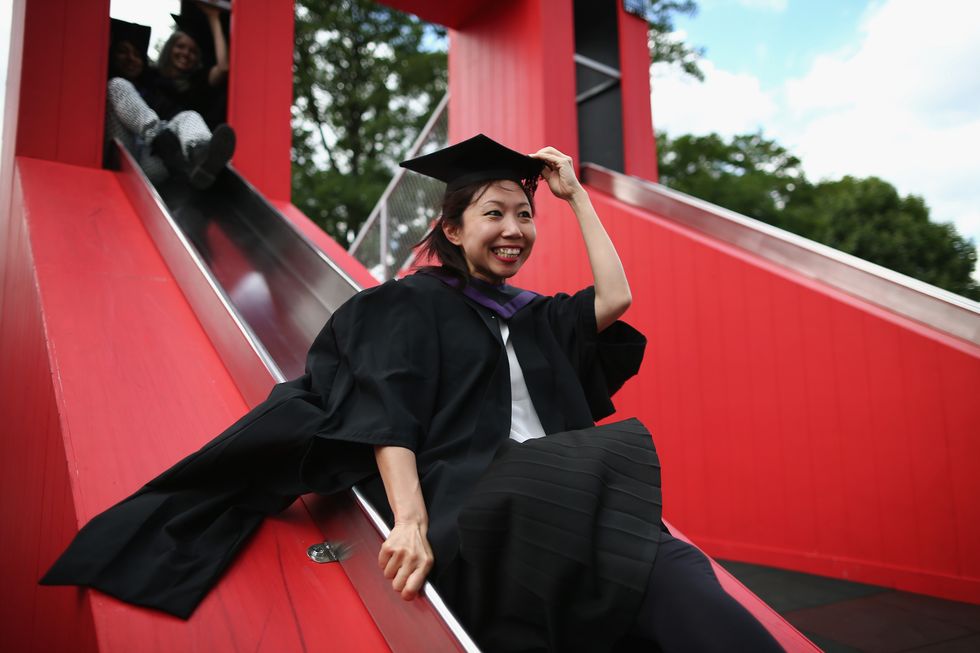 It's a comedic troupe that only stupid people are breeding. But is there any truth to it? After all, child rearing takes a long time, as does a master's degree or doctorate. As such, those who seek higher degrees tend to have less children and have them later on in life. A new study suggests that this phenomenon has genetic underpinnings. Moreover, the gene variants which are associated with higher educational attainment have been in decline for decades.

First, let's be clear. This study is not saying people are getting dumber. Research suggests people who tend to get higher degrees are merely influenced by certain gene variants, not controlled by them. Consider that the genes in question, discovered just last year in a study published in the journal Nature, account for about 20% of higher educational attainment. The genomes of 300,000 Europeans were studied to come to these conclusions.

There are about 74 significant loci associated with earning a higher degree. To be sure, geography, nutrition, how one is raised, and socioeconomic background play far more of a significant role. In addition, researchers believe other genetic variations may also influence higher scholastic achievement.

These 74 loci, in addition to being associated with earning a postgraduate degree, increase cognitive capability and “intracranial volume," as well as decrease neurosis and one's risk of developing Alzheimer's. They're also associated with longevity, and work against obesity and smoking. As such, the decline of these genes may have other implications for society as well.

Whether or not one achieves a higher degree may be influenced by genetic factors, and one study suggests these genes are in decline. Credit: Getty Images.

In this study, conducted by Icelandic genetics firm deCODE, a database containing the genomes of 129,808 Icelanders was examined. Researchers poured over genealogical data as well. They selected the time period 1910-1990, and over course of their research, examined 620,000 sequence variations. After that, the geneticists compared their findings to other genomic data from sources in the US, the UK, and the Netherlands.

The team's findings were published in the Proceedings of the National Academy of Sciences (PNAS). Researchers found that the genes in question, collectively known as POLYedu, became less pronounced in Icelandic society during the period 1910-1975.

DeCODE's CEO Dr. Kari Stefansson, led the study. He said in a press release, “These findings are an example of how we can use genomics to shed light on the evolutionary causes and consequences of observed social trends in modern human society." He added, “As a species, we are defined by the power of our brains. Education is the training and refining of our mental capacities. Thus, it is fascinating to find that genetic factors linked to more time spent in education are becoming rarer in the gene pool."

What was discovered is a negative correlation. “If you are genetically predisposed to have a lot of education, you are also predisposed to have fewer children," Dr. Stefansson said. He and colleagues also found the effect was stronger in women than men. But that doesn't mean we're destined for a future that resembles the movie Idiocracy.

For one thing, we have greater access to education than ever before. Plus, there's no evidence that people are getting dumber. Generally speaking, we become better at abstract thinking as time goes on. But our memory worsens as a result.

Dr. Stefansson said of the results,

In spite of the negative selection against these sequence variations, education levels have been increasing for decades. If we continue to improve the availability and quality of educational opportunities, we will presumably continue to improve the educational level of society as a whole. Time will tell whether the decline of the genetic propensity for education will have a notable impact on human society.

Another aspect is the effect is small. Researchers estimate the loss in intelligence due to the decline of POLYedu genes is about 0.03 IQ points per decade. Critics argue that environment is the most pivotal factor when it comes to higher scholastic achievement. Dr. Stefansson himself points out that IQ scores have increased by around 14 points between 1932 and 1978, due to a greater scientific and technological sophistication in society coupled with wider access and higher quality education. Another limitation, these results were only studied in Icelandic society, and must be verified in others.

Want to know more about the genetic influence on education? Click here: