Winter Olympics 2018: How South Korea learned the hard way not to mess with North Korea

Could the upcoming Winter Olympics stand as a turning point, or will it be more of the same? 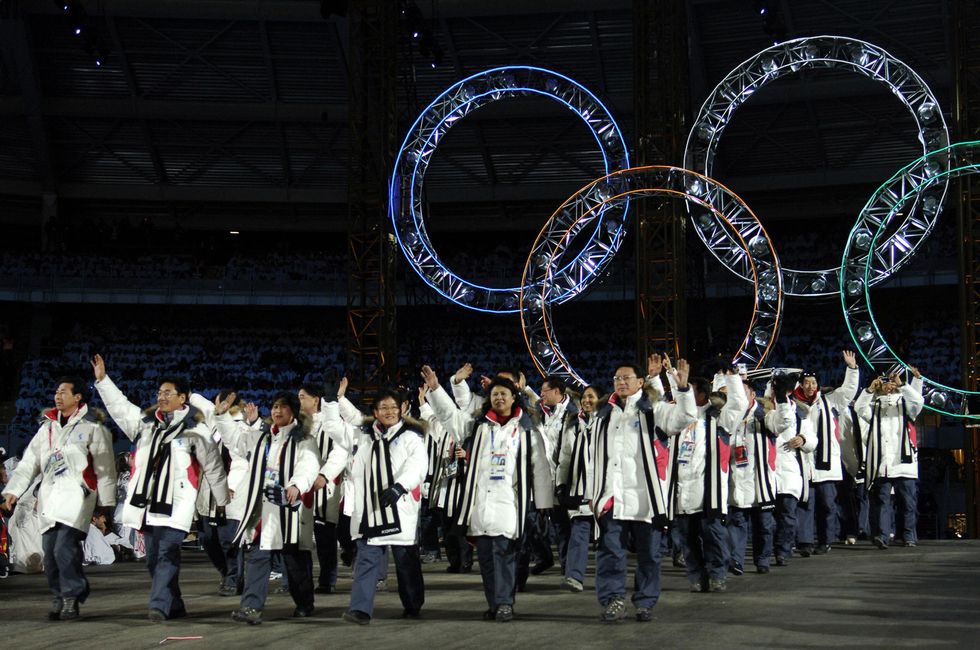 North and South Koreans march together at the 2006 Winter Olympics in Turin, Italy. Credit: Getty Images.

Athletes belonging to the olympic teams of North Korea and South Korea will enter the Olympic stadium for the opening ceremony under one flag, and the two nations will field one unified female ice hockey team. But why is the South Korean government, headquartered in Seoul, so keen to get Pyongyang and North Korea to participate?

The answer requires some context.

How the 1988 Summer Games Caused Chaos

In 1981, South Korea was selected to host the 1988 summer Olympics by the International Olympic Committee (IOC). It was looked upon as the nation's coming out party. Though still under a dictatorship at the time (but not for much longer), South Korea was able to project its impressive economic development since the end of the Korean War.

Nicknamed the “Miracle on the Han River,” South Korea went from an extremely poor country to an economic powerhouse in just a few decades. The government made reforms, to be sure, but it was pressure from the people of South Korea in the 1980s and 1990s that midwifed true democracy in a place once mockingly referred to as a “rice republic.”

North Korea regards its southern neighbor as a puppet regime of the West, particularly the United States, who it believes is plotting its eventual overthrow. The Kim regime, currently led by Kim Jong-un, considers itself the only true Korea, uncorrupted by foreign influence (although it depends on China for its economic livelihood). But after the IOC awarded the Summer Olympics to South Korea in 1981 (for the 1988 Games), North Korea petitioned to co-host the Summer Olympics with South Korea.

Memorial for the Rangoon bombing that took place in Burma (now Myanmar) in 1983. Credit: Getty Images.

South Korea rejected the co-hosting idea but decided to allow the DPRK (North Korea’s officialname) to host five sporting events as a concession. Pyongyang (the North Korean capital) found this insulting and ended up boycotting the Summer Games completely. But that’s not all. Two tragedies occurred between when South Korea was awarded the Games in 1981 and the opening ceremony in 1988.

(The New York Times recently covered these events in a podcast episode of The Daily. It's a good listen and you check it out here.)

A Squeaky Wheel Gets Its Oil:

These incidents can also be looked at in terms of the transfer of power. North Korea is the world’s only Communist dictatorship that has successfully passed power down power from father to son over two consecutive generations. These attacks may have helped build Kim Jong-il’s legitimacy as a military commander, fighting off the foreign imperialist threat, just as the sinking of the Cheonan battleship in 2010, and the further development of North Korea’s missile and nuclear programs have helped build the military chops of the hermit kingdom’s most recent heir, Kim Jong-un. North Korea historically employs a strategy called brinkmanship. It goes through cycles of belligerence followed by a calming of tensions, only to turn belligerent once again. During two periods in recent history—1993 to 1998 and 1999 to 2005—the United States negotiated a deal with North Korea to get it to halt its nuclear program. But after both attempts, North Korea pulled out of deal, kept the aid money, fuel, and other goodies, and restarted its weapons program anyway. On the surface, these latest overtures look like just another calming phase.

2017 saw some of the tensest months in the conflict between North Korea and the West, mostly because North Korea’s missile and nuclear tests began to bear fruit, but also due to intensifying rhetoric between Pyongyang and Washington DC. Now North Korea is once again extending an olive branch to South Korea. On January 8, the two sides met at Panmunjom, as known as the “truce village,” which is a hall on the Demilitarized Zone (DMZ)—the most heavily fortified border in the world. It was the first such meeting since 2015.

Meeting of the two Korea's for the first time in two years. Panmunjom, the DMZ. Credit: Getty Images.

As a result of the meeting at Panmunjom, the United States and its South Korean partners in Seoul have pledged not to hold military drills during this year's Winter Olympics (which the Americans and South Koreans call defensive while North Korea sees them as practice for an invasion of its territory).

After a follow-up meeting on Jan 17, 2018, the two Koreas announced that they will cooperate in several ways during the Olympic games, which the IOC has approved: marching together under a unification flag during the opening ceremony, combining their women’s hockey teams and perhaps others, and North Korea is to send a 230 member cheering squad to root for both countries.

Such a sudden change of heart among western leaders—from ostracizing North Korea to making concessions over symbols of reunification—may seem like bizarre behavior, but negotiators say North Korea has perfected brinksmanship, and seems to now be pivoting toward the conciliatory phase. Perhaps bellicose rhetoric exchanged with President Trump caused it to seek a more amiable tone. In December, Secretary of State Rex Tillerson said the United States was ready to talk to North Korea without preconditions. He still holds that position today.

Too Much of a Bully Pulpit?

Direct Diplomacy between North and South

Both the Obama and George W. Bush administrations demanded that Pyongyang give up its nuclear ambitions before coming to the table. Even so, inflammatory remarks by President Trump during a cooling period may have sent Kim into the arms of his southern neighbor. A good cop, bad cop scenario? That remains to be seen.

What’s different is, Pyongyang is actually dealing directly with Seoul. Before, it has demanded to deal directly with the United States. North Korea's Kim regime is loath to give up its nuclear weapons program after seeing what happened to Saddam Hussein and Muammar Gaddafi, each of whom dismantled their programs after receiving heavy pressured from the West. It is therefore likely that Kim will get an intercontinental ballistic missile (ICBM) strong enough to carry a nuclear warhead and use it as leverage to secure a handsome deal.

If the North and South Korea could work out a lasting peace among themselves, that might lead to the best outcome. Experts say a soft landing on North Korea, rather than a bloody conflict, assassination, or coup, is probably the best approach. Besides nuclear weapons, North Korea has thousands of long-range artillery pointed directly at Seoul, along with other horrific plans should its final hours be at hand. A conflagration would cause devastation and a horrific loss of life, the likes of which the world hasn’t seen since perhaps World War II.

Despite strong rhetoric to the country, there is little leverage outside of pressuring China to try and stop North Korea from developing it’s nuclear and missile programs. Credit: Getty Images.

But that’s an end game for the Kim regime. A starving army, old equipment, and a lack of resources means it can only see temporary gains through asymmetrical warfare. There’s no way the Kim regime could hold onto power should it come to an escalating conflict. And say the country were to fall suddenly, what then? Well, millions of starving North Korean refugees might flood the Chinese and South Korean borders.

Besides that chaos, South Koreans would have to foot a significant part of the bill to rebuild North Korean infrastructure, a price tag estimated at $1 trillion dollars, according to S. H. Jang, former president of the Royal Asiatic Society-Korean Branch. Such a public investment would surely sow a lot of resentment among the population of South Korea.

Meanwhile, North Koreans would likely be forced to work in factories for low wages, once corporations flood in to take advantage of the cheap labor. North Korean citizens militarized and filled with propaganda could easily organize themselves and start a bloody uprising to overthrow what they’d see as imperialist invaders. Since many of those factories would likely be from South Korea, it could even spark a civil war. So, whether Pyongyang’s current intentions are authentic or merely posturing, Washington and Seoul will have to play along, play nice, and see where this new thaw in relations is leading, if anywhere at all.

For its part, the Winter Olympic Games in PyeongChang, South Korea, will include six new sporting events: men's and women's big air snowboarding, men's and women's speed skating mass start, curling mixed doubles and the Alpine team event where skiing teams pool their talent. And more competitions means more gold medals—102 in total—the most ever contested at an Olympic Winter Games to date.