These Soft Robots Have Super Strength, Cost Less Than a Dollar, and Are Built in Minutes

This remarkable breakthrough is sure to usher in a new generation of robots. 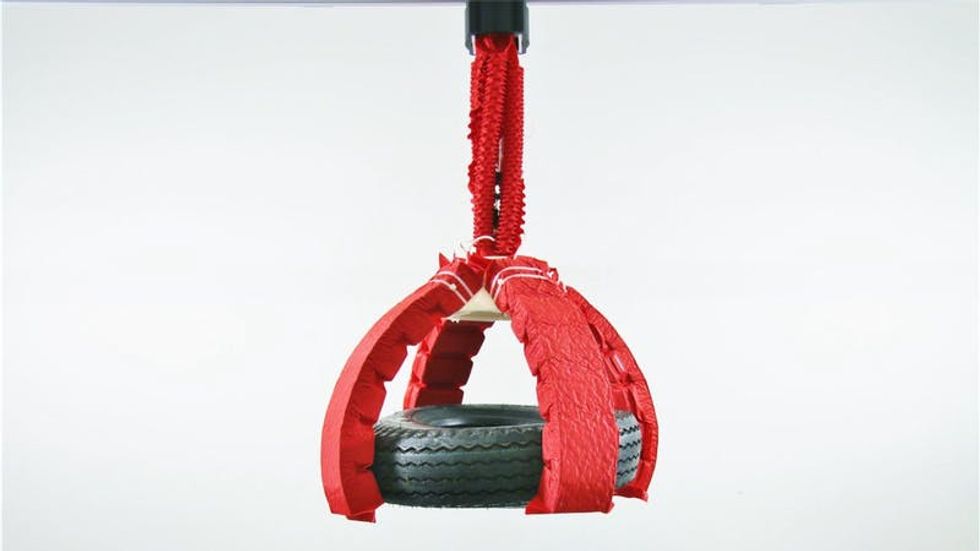 Robots have mainly been used to do dangerous, dirty, or repetitive tasks. As such, they have often been hard, metal based, hulking monstrosities. The thing is, we have other sorts of needs for robots too, ones that require a gentler approach. Robots with soft, formable structures have been used to put eggs in a crate and other manual labor tasks. But roboticists hope to move beyond this.

As is often the case, the goal is to develop robots modeled after organisms in the environment which are savvy at navigating the terrain and reaching objectives. Roboticists are even proposing soft robots that can grow, repair themselves, and even self-replicate.

While your traditional hard version of robotics has made great leaps forward recently, as anyone who’s seen the video of a robot doing a backflip can attest, soft robots are still in their infancy. They’ve come a long way in the last decade or so. Yet, those in this sub-field still have a number of challenges to overcome. Scientists are just now beginning to experiment with different materials and more radical designs.

How to make them and what tools are used hasn’t been established yet. What's lacking is a precedent. The sub-field is just now being explored. Designers have a lot to think about. There’s the cost of materials, scalability, strength, speed, and efficiency of movement. For instance, soft robots though more flexible and nimble, often lose strength and durability as a result. Creating artificial muscles or actuators has been particularly challenging. Now, one team from MIT and Harvard are reporting a significant advancement, inexpensive soft robots that can lift many times their own body weight. Their results were published in the journal, Proceedings of the National Academy of Sciences (PNAS). Roboticists at the Wyss Institute at Harvard University and MIT’s Computer Science and Artificial Intelligence Laboratory (CSAIL), developed what may not become the next generation of soft robots.

Ironically this cutting-edge innovation borrowed heavily from an art form that dates back almost two centuries, origami. The internal framework of these robots folds in and out. As such, they're able to life 1,000 times their own body weight.

Daniela Rus, Ph.D, a professor of electrical engineering and computer science at MIT and a researcher on this study, said, “We didn’t expect a thousand-fold increase (in strength). It’s like giving these robots superpowers.” With this, artificial muscles are now in the world, and robotics will be revolutionized as a result.

Rob Wood, Ph.D. is a co-author of the paper. He’s a Founding Core Faculty member of the Wyss Institute, and a Professor of Engineering and Applied Sciences at Harvard. Wood said in a press release, “Now that we have created actuators (muscles) with properties similar to natural muscle, we can imagine building almost any robot for almost any task.” The breakthrough comes from their unique approach.

Rus asked, “When creating robots, one always has to ask, ‘Where is the intelligence – is it in the body, or in the brain?’” She went on, “Incorporating intelligence into the body (via specific folding patterns, in the case of our actuators) has the potential to simplify the algorithms needed to direct the robot to achieve its goal. All these actuators have the same simple on/off switch, which their bodies then translate into a broad range of motions.”

Each soft robot was designed from an inner structure or “skeleton” consisting of either a metal coil or plastic folded into a particular pattern. This lay inside a textile or polymer bag which made up its “skin." The bag is filled with air or a liquid, such as water. The muscle is then moved by applying a vacuum inside of it. This creates tension which results in motion. Since it’s driven by the shape of its skeleton and vacuum pressure, no other human intervention or power source is needed to generate motion.

One of the most exciting aspects is that the muscle itself can be programmed. It’s scalable too. The team made such robots between a few millimeters and up to a meter (3 ft.) long. They’re also extremely inexpensive to make. One single robotic muscle takes only ten minutes to create and costs less than a dollar in materials.

Since its waterproof, it can be used out in the environment or made with a digestible material which can be swallowed, to release a drug in a targeted manner or at the proper time. Researchers believe that in the future, this technology can be used to create malleable architecture, tiny surgical tools, wearable robotic exoskeletons, and devices for deep sea research and space exploration.

“The possibilities really are limitless,” Rus said. “But the very next thing I would like to build with these muscles is an elephant robot with a trunk that can manipulate the world in ways that are as flexible and powerful as you see in real elephants.” She and colleagues say they hope to not only mimic nature but surpass it.

They may be on their way. Not only do these robots have uncanny strength and a versatility of movement, they can exact six times more force per area unit than a mammal’s skeletal muscle can. Although lightweight, a 2.6 gram (0.09 oz.) soft robot muscle can lift a 3 kg (6.6 lb.) object. That’s like a duck bench pressing a car!

To learn more about these soft robots, click here: