The Fear of Supernatural Punishment and Not "Big Gods," Gave Rise to Societal Complexity

Researchers used a technique from biology to illustrate how Pacific Asian cultures developed. 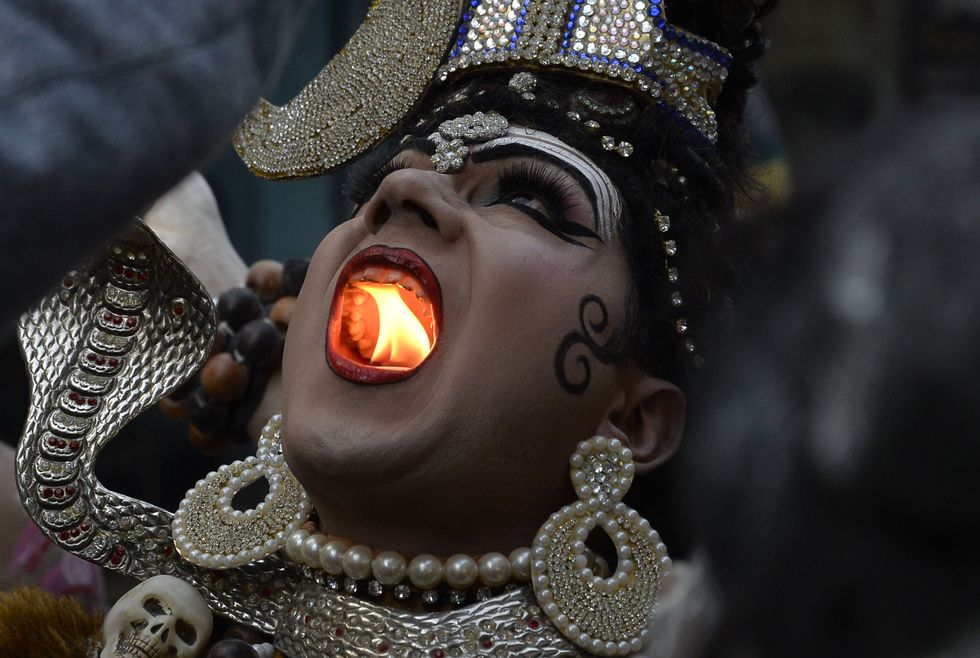 Hindu festival where a performer shows a unique talent.

Though larger numbers of people in developed countries are abandoning organized religion, no one can deny that religion or perhaps spirituality, has been a significant part of the human experience, historically. It’s been found in all cultures throughout the world. This leads evolutionary scientists to believe that spirituality must have played a critical role in our development. But exactly how has been difficult to discern.

Of all religions, Islam and Christianity have been the most successful. Together they account for 3.5 billion people in the world. The global population currently is a little over seven billion. To be so successful and grow so complex, you need to include the help of almost everyone in society. Freeloaders or those who go off to serve their own interests could hamper development. So how do you ensure that everyone buys in?

A previous study posited that the strong gods portrayed in Christianity and Islam helped to develop their respective societies into larger, more complex civilizations. These are omnipotent, high gods who enforce the moral code, and punish those who run afoul of it. One study out of the University of British Columbia concluded that such gods may have helped spur societal development. However, there isn’t consensus among scholars, as to whether a belief in such gods is in fact a driving force.

A New Zealand research team now says that these societies were already well on their way before “big gods,” came along. Instead, it was fear of supernatural punishment that kept everyone in line, they suggest. These included punishments from mighty gods, “fallible localized ancestral spirits,” and even, “inanimate processes like karma.”

Do you need a moralizing high god for society to develop, or is a belief in supernatural punishment enough?

One problem is how to study such influences. Some cultures share lots of traits, not only because of common development, but a common ancestry, history, and so on. Following back which associations influenced what development, has traditionally, been difficult. Researchers at the University of Auckland borrowed a technique from evolutionary biology that analyzes data models, to arrive at their conclusions.

Researchers looked at 96 out of 400 indigenous Austronesian cultures. This is was a great seafaring culture of the Asia Pacific region who at one time inhabited parts of Taiwan, Australia, the Philippines, Madagascar, and many of the Pacific Islands, including Hawaii and Easter Island. Cultural evolution expert Joseph Watts was one of the researchers on this study. He said, “Austronesian cultures offer an ideal sample to test theories about the evolution of religions in pre-modern societies, because they were mostly isolated from modern world religions, and their indigenous supernatural beliefs and practices were well documented."

The political arrangements of these societies differed dramatically, from egalitarian to hierarchical. Their spiritual beliefs varied widely as well. The Merina people of Madagascar for instance, had one supreme deity, whereas native Hawaiians were polytheistic. What all Austronesian spiritual systems had in common was, each enforced the moral codes of conduct for their respective societies. Researchers divided spiritual systems into two different groups, Moralizing High Gods (MHG) and belief in systems of supernatural punishment (BSP). The latter included things like polytheism, ancestor worship, and karma.

Researchers used historic and ethnographic data and applied a technique from evolutionary biology called Bayesian phylogeny. This uses probability to create data models which help create phylogenetic trees, showing all the branches to illustrate say, how a species has changed over time. Watts and colleagues tested both the “big gods” theory and fear of supernatural punishment.

How has our relationship with religion and spirituality spurred societal development?

The fact that societies had reached a certain level of complexity before big gods arrived was the most persuasive detail. These communities feared such things as locust infestations, crop failures, and coming down with an illness, if they did not fulfill the wishes of their gods. This fear spurred on their work, allowing for higher crop yields and a greater production of goods, and thus allowing small villages grow into towns and even larger communities.

After reading the early literature and accounts, researchers coded political data and that associated with Moralizing High Gods (MHG). These cultural units were then analyzed using Bayesian phylogeny. As a result, 22 accounts of political complexity were found, even with a low degree of MHG. Researchers wrote that, “Although beliefs in MHGs do coevolve with political complexity, [the] beliefs follow rather than drive political complexity.”

They also found reports of supernatural punishment. This seems to have helped fuel the rise of political complexity and spread it over a greater area. Researchers believe this fear suppressed selfishness and laziness and increased cooperation. Not only did fear of supernatural punishment help societies coalesce around cooperative projects, it also legitimized political figures. Despite this impressive breakthrough, more research is needed. For instance, what spurred supernatural beliefs in the first place? And how did such beliefs persuade others into becoming part of an overarching system?

The study does have its critics. Evolutionary biologist Mark Pagel contends that the development of language and not religion, spurred complexity. Language helped create trade networks, which then required more intricate political and economic systems, Pagel believes. Moralizing high gods were later used, he says, by those in power to solidify control, and perhaps grab a bigger piece of the pie for themselves, or set their sights on a larger project and command forces to make it happen. Meanwhile, Cambridge anthropologist Hervey Peoples, concedes that MHGs perhaps didn’t drive societal complexity. But he believes they may have helped stabilize it.

Ara Norenzayan is a psychologist at the University of British Columbia in Vancouver, Canada. He first suggested that moralizing high gods would help societies become more cohesive and complex. Norenzayan said of these findings, "In Austronesia, social and political complexity has been limited. There have been cases of chiefdoms but there has not been a single state-level society. So it's not all that surprising that big moralizing gods don't play a central role." In Eurasia however, Norenzayan suggests that a belief in moralizing high gods and complex societies coevolved.

Despite the debate over these findings, this study utilized a novel scientific approach to explore a topic in the social sciences. Researchers concluded, “Our results show the power of phylogenetic methods to address long-standing debates about the origins and functions of religion in human society.”

To learn more about how belief in deities may shape societies, click here: