Superbugs Could Usher in a Frightening, Post-Antibiotic World

If new kinds of drugs aren’t developed soon superbugs or antibiotic resistant bacteria could erase all the gains modern medicine has made. Even simple infections would become life-threatening. Fortunately, government plans are tackling the issue and some scientists have already found a few things that can take superbugs out. 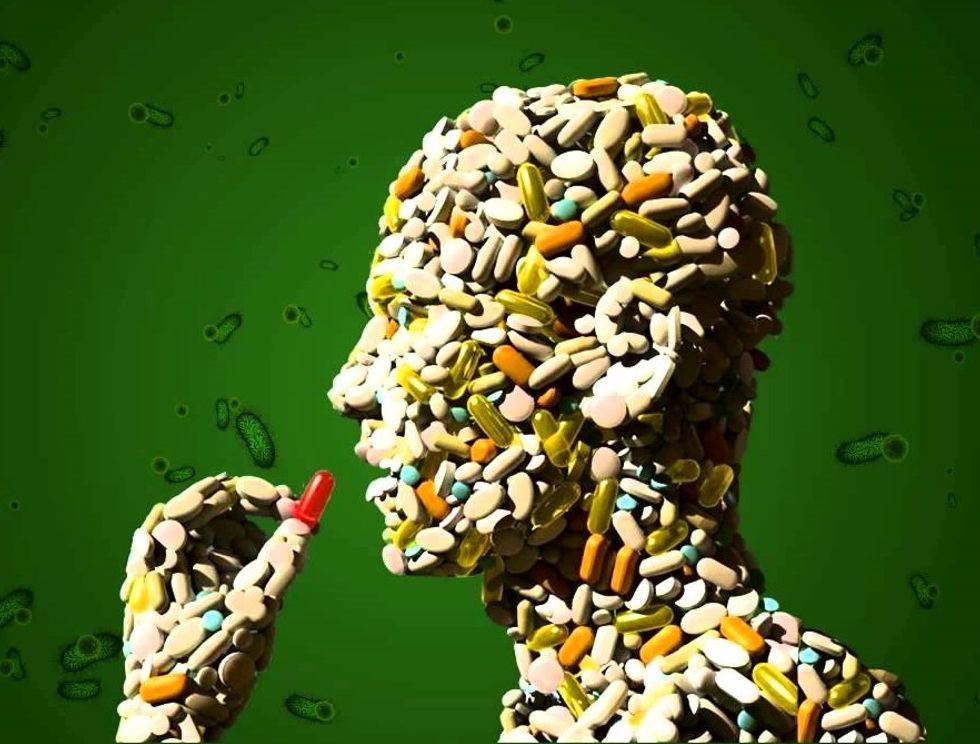 A 49-year-old Pennsylvania woman was recently diagnosed with a rare form of E.coli, one that can be killed by only one antibiotic and soon perhaps by none of them, according to the Department of Defense. This is what public health officials have feared, a so-called superbug, or a bacteria which could reasonably mutate beyond all current antibiotics, including colistin which is considered a last resort. The military clinic in Pennsylvania who treated the woman sent samples to Walter Reed Medical Center. Military researchers there confirmed the superbug.

Before the advent of antibiotics, a common infection could be life-threatening, and many children lost their lives to strep throat. That time could be upon us once again, at least where industrialized nations are concerned. 700,000 currently die from antimicrobial resistance worldwide each year.

CDC Director Dr. Tom Frieden made the grim announcement regarding the Pennsylvania woman at the National Press Club in Washington, D.C. “It basically shows us that the end of the road isn’t very far away for antibiotics…” Frieden told the Washington Post later on. The woman said she has not traveled outside of the U.S. within the last five months. Currently, no one knows how she acquired the superbug. Previous infections have been reported outside the U.S., which have stoked fears of a global epidemic. So how big of a threat are superbugs? Are they manageable? And how are governments and other organizations responding?

The woman is well again. Even so, the CDC reports that each year, a minimum two million in the U.S. are infected with some kind of bacteria most antibiotics cannot cure. 23,000 succumb to their infection. According to the WHO, superbugs are the biggest threat to world health in modern times.

Frieden urged the hastening of drug development by researchers and pharmaceutical companies. The CDC director has warned in the past of the overuse of antibiotics. Bacteria and antibiotics naturally go through an arms race. As bacteria become resistant to certain drugs, newly developed ones must replace them, which the bacteria will too eventually overcome.

Antibiotics are also widely used in the food supply, given to livestock and poultry en masse to prevent infection. On another front, a trend of patients not finishing a full course of antibiotics, but stopping when they feel better, has led to some bacteria to survive, mutate, and develop resistance.

The biggest fear is that these superbugs will transfer their immunity to other bacteria who are already resistant to other forms of antibiotics, as bacteria are able to share loose genetic material with one another. According the CDC’s Dr. Beth Bell, this E. coli case is a wake-up call, signaling that they will soon acquire the last component needed to resist all forms of antibiotics.

Antibiotic resistance test. Here bacteria are streaked on petri dishes containing white antibiotic filled discs. Those who have grown indicate resistance. The bacteria on the right are susceptible to only three of seven antibiotics total.

Unfortunately China’s pork and poultry industries use colistin as their go-to antibiotic. It was there that a colistin-resistant gene was first discovered back in November. It has now been identified in Europe, Canada, Africa, and South America. The most dangerous superbugs are those resistant to a class of drugs called carbapenems. Carbapenem-resistant bacteria (CREs) have been identified in 44 states and today cause 600 deaths per year, according to the CDC. Dr. Frieden warned of a “post-antibiotic world,” which could affect everything from pneumonia to cancer treatment. Minor infections could become life-threatening, and minor operations could turn deadly.

Luckily, for the Pennsylvania woman, though the bacteria culture from her infection was found to resist colistin and other antibiotics, it was receptive to carbapenems. It is still a mystery how the woman came into contact with the bacteria. Experts say that in some cases, up to 50% of those infected with superbugs may die from them. Antibiotics have been one of the greatest advancements in medical science in all of human history. Yet, researchers have been heralding their shortfall in the face of superbugs for years now, some even for decades.

So what is being done? The Obama administration has unveiled a national plan to tackle such bacteria, which includes incentives for drug companies to develop new medications, a new diagnostic tool, stricter controls on the use of antibiotics, and more. Few new antibiotics have been developed in recent decades since pharmaceutical companies find they offer insufficient returns, another aspect that has made us vulnerable to superbugs. The diagnostic being developed would allow physicians to quickly determine whether a patient has a viral or bacterial infection, and so if antibiotics are warranted.

Collaboration with the WHO and the ministries of health of many other nations, is in the works too. The Obama administration plans to invest $1.2 billion in the effort. Some experts in infectious diseases say it doesn’t go far enough. The plan calls for more infection controls in hospitals, Medicare and Medicaid reporting prescription patterns, and the CDC screening new arrivals from countries known to have resistant strains of tuberculosis. Some activists are calling for antibiotic free meat in the food supply. According to one consumer protection activist group, 70% of the antibiotics in the U.S. are given to livestock and poultry. But the government’s plan does not address this issue.

Antibiotics given ubiquitously at factory farms have been blamed for the rise of superbugs.

Internationally, British Prime Minister David Cameron is promoting a $1.2 billion plan to confront the superbug menace. Cameron will outline it before the next G7 summit. This is a piece of a larger $16 billion program to be rolled out over ten years. The plan, created by former Goldman Sachs chief economist Lord Jim O’Neil, states that if nothing is done, superbugs could take the lives of 10 million per year by 2050.

A couple of solutions are being shopped around. According to two microbiologists at the University of British Columbia, a certain kind of clay found in Kisameet Bay north of Vancouver, used for healing by the Heiltsuk First Nation for centuries, has been shown to kill drug-resistant bacteria. The scientists claim it may be used as a binding agent when coupled with certain antibiotics. An Arizona State University study found similar properties in a certain clay found in Oregon, due to the minerals within it. Meanwhile, Yale University researchers have discovered a bacteria eating virus in a pond in East Lyme, Conn. Known as OMKO1, researchers say this virus could be used to weaken a superbug, while antibiotics are given to deal the final blow.

To learn how antibiotics in livestock and poultry raising contributes to superbug developed click here: