Seasteaders Plan to Build a Libertarian Utopia on the High Seas

Silicon Valley engineers and financiers make up the lion’s share of the movement. 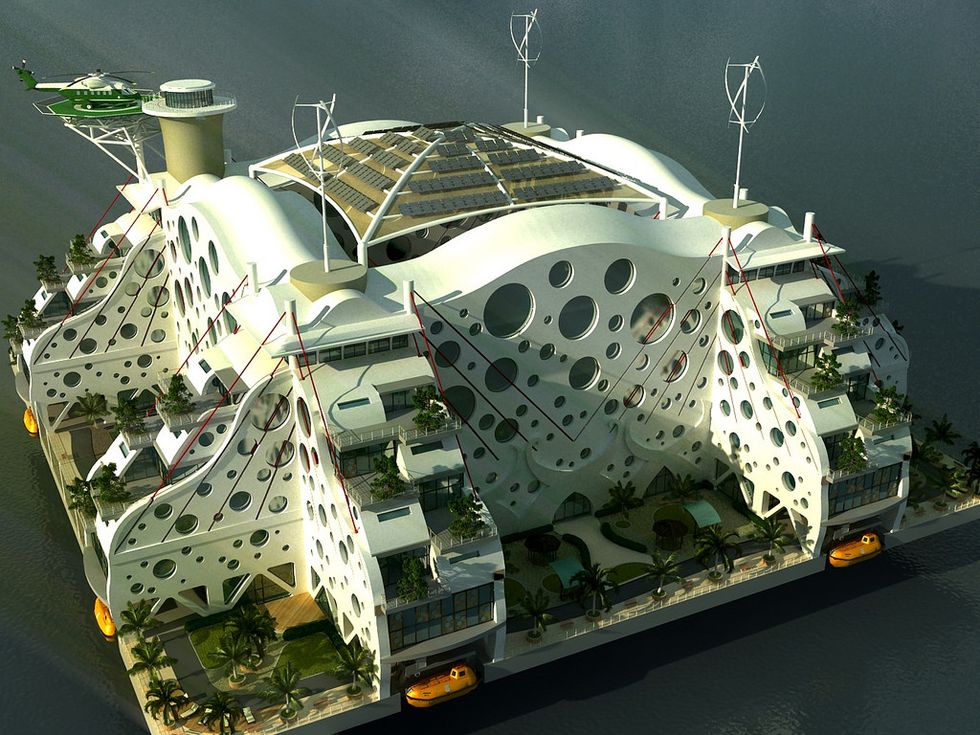 Model for a seasteading community.

Looking at the world today, all of its gnawing problems and near daily tragedies, one might easily dream of escaping to their own small, well-designed utopia. Here, like-minded individuals would help build a better society, one based on their own beliefs and values. America has had many such groups immigrate to its shores and lose themselves in the frontier in order to breathe life into such a vision. Usually, religious persecution was the push factor. For a group of modern day libertarians, its government overreach. But today, with almost all the land on Earth accounted for, this group has set their eyes on a different kind of real estate, the high seas.

The idea is to build a floating city at least 200 miles off of a country’s coastline. This is international waters by UN treaty, out of the reach of the world’s governments. But creating a seafaring utopia isn’t so simple. The Seasteading Institute is now in friendly talks with French Polynesia. Among the movements bigwigs is PayPal co-founder Peter Thiel, who is currently helping the Trump campaign in their transition into the White House. Jim O’Neil, who worked for the second Bush administration and is a possible Trump FDA appointee, is another.

Thiel is a co-founder of the Seasteading Institute, along with Patri Friedman, a former Google software engineer and grandson of famed economist Milton Friedman. Thiel and Friedman announced their plan in 2008. Should the president of the French territory sign off, the project could begin as early as 2017. It is slated for completion in 2020. Thiel, who invested $1.7 million in the project, has spoken of the settlement as a libertarian utopia. Though no longer on the board, he continues to support the project financially.

Originally, the plan was to be completely independent. But the estimated cost of such a project was $225 million, with an annual operating cost of $8 million. Soon, seasteaders were starting to see the benefits of having a nation to partner up with. French Polynesia was chosen because it has a fiber cable run from Hawaii which allows for the same kind of bandwidth would-be residents are used to, and it’s only an eight hour flight from Los Angeles. For French Polynesians, whose land is being threatened from sea level rise due to global warming, the idea of a floating city has tremendous appeal.

PayPal co-founder Peter Thiel is one of the major financiers of the project.

Randolph Hencken is the Seasteading Institute’s executive director. Though for a period there, it looked as if the project may never see fruition, the plans are now awaiting the signature of the French Polynesian president, Édouard Fritch. Hencken told Business Insider that his life probably won’t change all that much. He’ll still spend most of his day behind a desk talking with clients. "The difference would be, I would probably start my day going kitesurfing," he said. His diet will also include more fish and breadfruit.

Hencken foresees yoga classes and trips to the nearby islands for sumptuous dinners with his wife at high class restaurants. He said that anyone can go off and be a hermit on a sailboat for a year or longer. So what makes this different? "Seasteading is for people who want to engage in the marketplace of ideas, the marketplace of commerce, and the marketplace of government," he said.

The plan entails building two or three platforms off the island chain, each about half a football field long. These will have on their surface communities housing around 30 people each. One model displays streamlined buildings reminiscent of a tech campus, along with a beachfront area, and a full size swimming pool.

Though the plans for stabilizers are in place, those who understand the sea know that even a series of small waves on a flotilla can make humans disoriented, never mind seasick, and storms can affect people in ways far worse. Knowing this, one wonders if even the best design can overcome the volatility and ever-changing nature of the sea. Oil platforms drill supports into the ocean’s bottom to secure them against wind and waves. But this is very expensive.

As it stands now, construction alone is projected at $30 million. Each platform will cost $15 million. A small group of anonymous inventors are said to be footing the bill, all of whom will become residents. In 2013, the project raised $27,000 via a crowdfunding campaign. But according to the institute’s director, those funds have already been paid to Norwegian design company DeltaSync, seemingly to engineer models for the platforms.

One of the designs for the seasteading initiative.

Should the project prove successful, more platforms may be added as time goes on. These will be self-sufficient cities. Even so, speedboats would be made available to take trips to the nearby islands for supplies or a visit. Each housing unit would be its own module. Those who were sick of their neighbors could just move to another place on the platform.

Seasteaders won’t be free of all governance. The community may be subjected to some French Polynesian laws, and as the islands remain a territory, French laws as well. These are expected to relate to environmental regulations and crime. But Hencken doesn’t see these as too stifling.

Challenges remain. Will the foundation last? What kind of economic zone will the floating nation create? Will there have to be new business and trade laws imposed on it, or will these be the same as that of their island hosts?

Then there is the most basic question. What will seasteaders do for a living, and what will be the floating island’s biggest industry? The place could quickly turn into a hedonistic destination. But if the teeny nation took to prostitution and illegal drug soirees, the countries whose citizens had moved there might pressure French Polynesia to get the seasteaders under control. Institute founders say they are aware of this possibility.

Then there are questions of culture, political rule, immigration rules, and others. In a Silicon Valley presentation in 2009, Patri Friedman likened the development of a governing body much like that of creating a software startup. "You could roll your own government out of pieces copied from all the societies around you,” he said. From there, a simple applicable government system could be created that would easily be adopted elsewhere.

"If we make one seastead, there's room for thousands," he said. What might life be like at such an outpost? Will people move there en masse or will it be a ghost town? Certainly those from big cities would miss the cultural trappings, restaurants, and other amenities. There’s also a general fear that the experiment will fall on its face. This isn’t the first attempt at a floating libertarian utopia. There was Operation Atlantis in the 1960’s, the Republic of Minerva in the 70’s, and the Oceania project of the 90’s. All ended in failure.

It was former software engineer Wayne Gramlich’s 1998 book SeaSteading—Homesteading on the High Seas, that inspired this current venture. Gramlich and Friedman together developed the initiative, which Thiel initially funded. Though a long and strenuous process awaits, one with an unknown outcome, seasteaders are in it for the long haul. Thiel said of the venture, "Decades from now, those looking back at the start of the century will understand that seasteading was an obvious step toward encouraging the development of more efficient, practical public-sector models around the world."

Yet, with a cadre of successful tech geeks and financial pros lining its ranks, a group by the way almost entirely Caucasian, one wonders if they are out to, as they claim, address humanity’s most daunting problems, or merely proposing a clever way to evade regulations and avoid taxes.