The theory could solve certain stubborn physics questions such as, where’s all the antimatter. 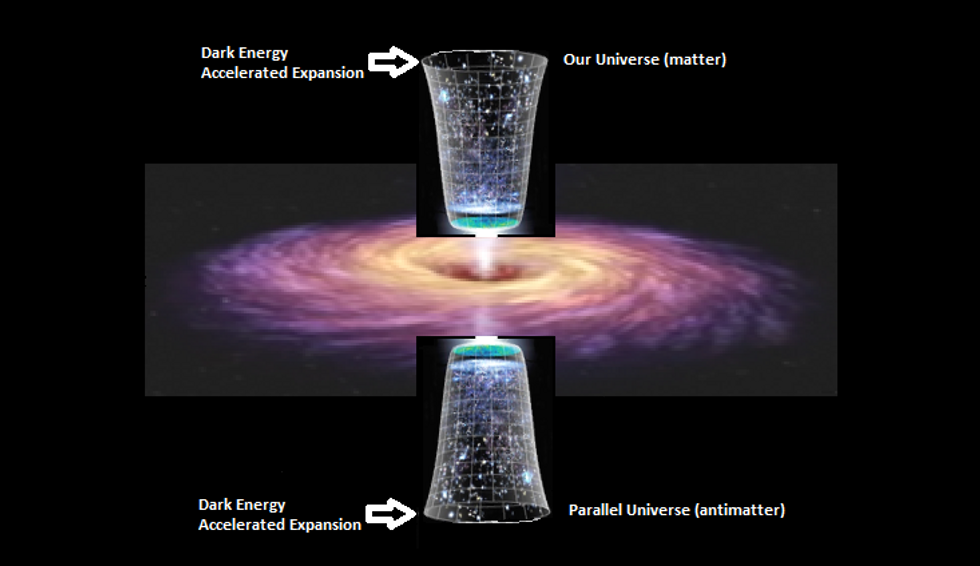 Imagine waking up after death and living out your old age, until you grew young enough to have a career, and hoped someday to go to college. This is what life might be like in the “mirror” universe, the exact opposite of ours. According to two teams of physicists, our universe may have a twin where time moves backward.

Of course, this is all just theoretical. But the theory answers some fundamental questions physics has been wrestling with for quite some time. One is, if the universe during the Big Bang was made of equal parts matter and antimatter, where’s all the antimatter?

Paul Dirac first proposed antimatter in 1928. Since then, physicists have found a wide range of antiparticles. These are present during high energy collisions in other places in the universe and also within particle accelerators, such as the large hadron collider at CERN.

In a 1964 experiment, which won them the Nobel Prize 16 years later, James Cronin and Val Fitch proved that you cannot have an antimatter universe for the simple reason that the weak nuclear force violates this model. For a while that was that.

Then in 2004, two scientists at Caltech, Professor Sean Carroll and his graduate student Jennifer Chen, revived the mirror universe theory, by trying to address another fundamental physics question, why does time only move in one direction?

Experiments at the HLC at CERN have shown antimatter. But it’s eerily absent in nature. Getty Images.

Through the course of their investigation, they ended up creating a model of the Big Bang which shoots outward in two opposite directions. In our universe, everything is made up of matter, while in the mirror universe, its antimatter.

As time moves forward in one direction in one universe, it moves backward in the other. But from the mirror universe, time would appear to be moving backwards in ours, which begs the question, who is actually in the backwards universe, us or them?

Generally speaking, when we talk about time, we consider the Second Law of Thermodynamics and in particular, entropy. This is the amount of disorder in a system which will eventually break it down, be it an engine, a computer, a star, or the human body. Entropy grows exponentially until sooner or later, it consumes the entire system. But instead of entropy, Carroll and Chen decided to focus on gravity.

Looking at just 1,000 particles and employing Newtonian physics, they were able to prove that this dual universe theory is possible. Their model even accounts for the weak nuclear force. Two teams of scientists have looked more deeply into this, since.

Physicists have long wondered why the universe only travels in one direction. NASA.

In 2014, one group published their findings in the journal Physical Review Letters. Three scientists collaborated on the project, Julian Barbour of Oxford, Tim Koslowski from the University of New Brunswick, and Flavio Mercati of the Perimeter Institute for Theoretical Physics. They studied a similar, self-contained, 1,000 particle system, based on gravity rather than thermodynamics.

This model showed gravity expanding in two directions, out from what’s been termed the “Janus point,” named after the two-headed Roman god. Here, entropy is how we experience time, as an ever forward motion, known in physics as the “arrow of time.” According to Barbour, if you take time as a natural phenomenon, rather than a pre-existing force, it flows in two different directions, which he contends popped up in their computer model, spontaneously.

As a result, those beings in the mirror cosmos would experience their lives as we do, but subtle differences could cause things to end up radically differently than they do in our epoch. So could you ever step into the mirror universe, should it exist? According to Mercati, no. The two epochs flow out forever from this central point and beings in one universe would never be aware of the other.

Even if there is a mirror universe, you’d never be able to cross the Janus point. Getty Images.

Dr. Carroll has built upon his theory since his groundbreaking announcement. Today, he’s at the California Institute of Technology. Carroll has teamed up with a colleague at MIT, Alan Guth. The model now is more refined, Carroll and Guth claim.

It doesn’t rely on gravity, for one thing. It works based on thermodynamics alone. It even operates smoothly when accounting for particles traveling through infinite space, rather than a self-contained system.

“We call it the two-headed arrow of time,” Guth told New Scientist, “Because the laws of physics are invariant, we see exactly the same thing in the other direction.” In this view, our universe and its mirror, may have been born out of a parent universe.

Their results haven’t been published, yet. One problem is that the model is only proven to work in terms of classical physics. Whether it’ll square with quantum mechanics or even general relativity, no one knows. Yet another issue is that it doesn’t incorporate a fundamental force of the universe, gravity. Researchers aren’t even sure of the exact structure their proposing.

“Instead of having two streams emanating from a river, it could be more like a fountain where you have lots of pairs of springs,” Carroll said. “Or just a whole host of springs flowing out of a fountain in different directions.” Perhaps our epoch is really a part of a much larger multiverse with each separate universe having its own mirror opposite, a fascinating prospect to consider.