Humanity's Earliest-Known Ancestors Have Been Discovered in Southern England

This is the oldest fossil ever found belonging to the line that leads to us. 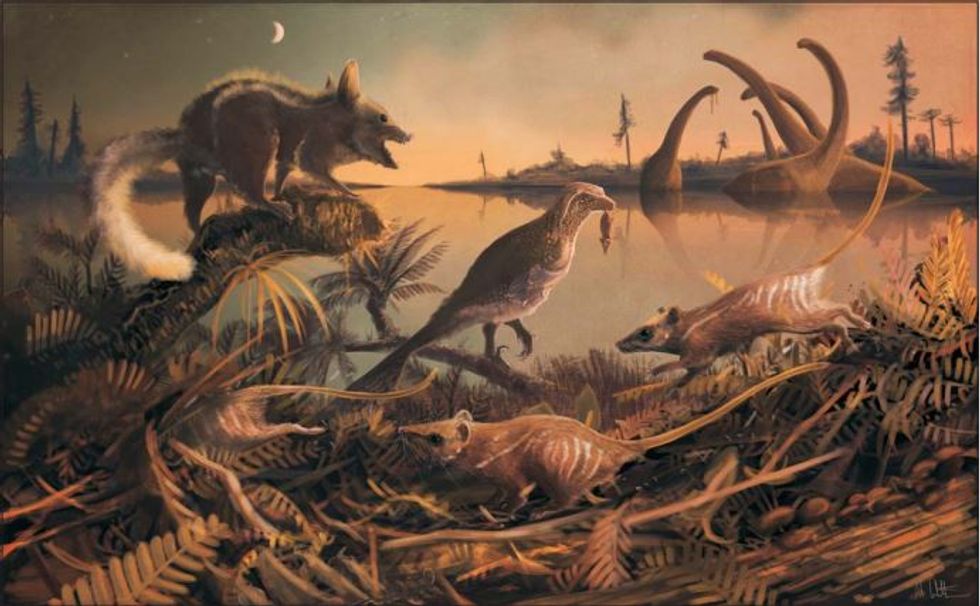 Phylogeny is the biological development and history of an organism or its class. Paleontologists have been researching the class Mammalia’s phylogeny for some time, particularly its trajectory from tiny rodent-like creatures in the late Triassic 200 million years ago, to modern-day humans. There are currently around 5,000 mammals on the planet, and it's a very diverse group at that.

Mammals are split into three subgroups. The first are the monotremes (Prototheria) who still lay eggs; among them only the duck-billed platypus and the spiny anteater. The second are the marsupials (Metatheria) among them kangaroos, wallabies, and the lowly possum. The last, latest, and most common type are placental mammals (Eutheria, Placentalia). These are mammals kept in a placenta in a mother’s womb before being born live and fully formed. This group comprises over 4,000 species with fantastic diversity, from mice and horses to whales and humans, and so many others.

Unfortunately, we don’t know much about the origins of placental mammals. But now, fossils of the earliest placental mammal—and as such our first ancestor—have been found. They are two teeth belonging to two rat-like creatures who lived 145 million years ago, during the Mesozoic era. Researchers at the University of Portsmouth in the UK found the teeth, belonging to creatures who probably scurried around the feet of dinosaurs. Their findings were published in the journal, Acta Palaeontologica Polonica.

There’s been conflicting evidence until now of when placental mammals first emerged. Other findings have pointed to the Cretaceous or Jurassic periods. This discovery puts their emergence squarely in the Cretaceous. This is the oldest fossil ever found belonging to the line that leads to us.

The fossils were found on the Jurassic Coast of Dorset in Southern England, near the city of Swanage. There, undergraduate student Grant Smith was sifting through some rocks from the early Cretaceous when he came across them. This is a rich location. Thousands of fossils have been unearthed in the area. Smith said he knew he’d found mammalian teeth, but never expected them to be so important.

He brought the teeth to Dave Martill, a professor of palaeobiology at the university. Prof. Martrill confirmed they were in fact mammalian. Martill said in a press release, “We looked at them with a microscope but despite over 30 years’ experience, these teeth looked very different and we decided we needed to bring in a third pair of eyes and more expertise in the field in the form of our colleague.”

Dr. Steve Sweetman is a research fellow at the university. He specializes in prehistoric rodents. “Quite unexpectedly,” Dr. Sweetman said, “he found not one but two quite remarkable teeth of a type never before seen from rocks of this age… even at first glance my jaw dropped!”

The teeth are of a type so highly evolved that I realized straight away I was looking at remains of Early Cretaceous mammals that more closely resembled those that lived during the latest Cretaceous – some 60 million years later in geological history.

In the world of paleontology there has been a lot of debate around a specimen found in China, which is approximately 160 million years old. This was originally said to be of the same type as ours but recent studies have ruled this out. That being the case, our 145 million year old teeth are undoubtedly the earliest yet known from the line of mammals that lead to our own species.

He believes the rodents were nocturnal. One burrowed into the ground and most likely ate insects, while the larger one may have included plants in its diet. “The teeth are of a highly advanced type that can pierce, cut and crush food,” Sweetman said. “They are also very worn which suggests the animals to which they belonged lived to a good age for their species. No mean feat when you’re sharing your habitat with predatory dinosaurs!”

One final note of these newly found species: one has been named Durlstotherium newmani. That’s after Charlie Newman, the landlord of the Square and Compass pub, the closest watering hole to where the teeth were discovered.