The Bella Bella Heiltsuk will use these findings in negotiations over their traditional lands. 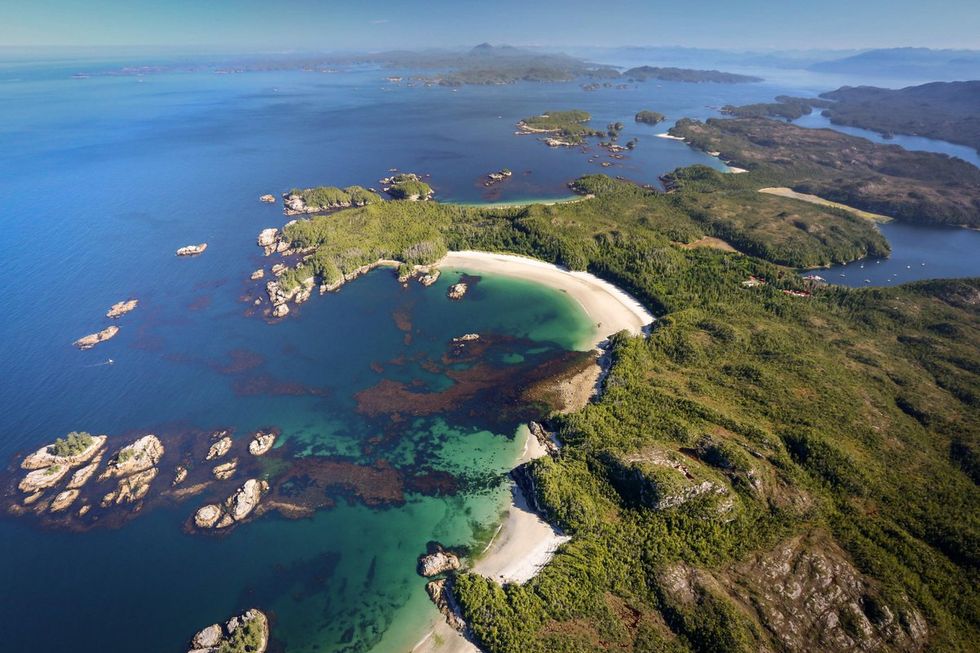 The British Columbia coast near Triquet Island. The Hakai Institute.

The Heiltsuk Nation are indigenous Canadians whose ancestors once controlled 6,000 sq. miles (approx. 16,000 sq. km) of coastline in what is now British Columbia. Heiltsuk is also a language family, much like Latin is the root to Italian, Portuguese, and Romanian. Those among the Heiltsuk Nation today were formerly known as the Bella Bella band (an Anglo mistake for what was actually a geographical feature).

According to their oral history, the Maker set their ancestors down within their traditional territory, before the great flood. Through artifacts uncovered on their lands, we know that modern-day Heiltsuk have been living in the same area for the past 9,700 years. Previous archeological research put them in British Columbia at 1,000 BCE. Until now, there was no proof that they were there before the worldwide flood, mentioned in the Bible and other texts of that day.

Archaeologists have now proven the Bella Bella Heiltsuk’s legend true. Researchers at the Hakai Institute and the University of Victoria, discovered the 14,000 year old settlement. It is thought to have been a refuge for the Heiltsuk’s ancestors during the second Ice Age.

The Vancouver Sun’s Randy Shore said it was a sizable village, “three times as old as the Great Pyramid at Giza and among the oldest human settlements in North America.” The discovery was made on a rocky spit on Triquet Island, a small, green, uninhabited spec off British Columbia’s central coast.

William Housty, a member of the Heiltsuk Nation told the CBC, "[It] reaffirms a lot of the history that our people have been talking about for thousands of years." He added, “To think about how these stories survived all of that, only to be supported by this archaeological evidence is just amazing.”

He also said that this finding should add weight to his people’s negotiation with the Canadian government for title rights over their traditional lands. “When we do go into negotiations, our oral history is what we go to the table with," said Housty. "So now we don't just have oral history, we have this archeological information. It's not just an arbitrary thing that anyone's making up ... We have a history supported from Western science and archeology."

The excavation was meticulous and painstaking, according to Alisha Gauvreau, a PhD student at the University of Victoria, who worked at the site. At first, they discovered a hearth or fire pit approx. 8 ft. (2.5 meters) underground. It still contained some charcoal flakes. They had the slices analyzed. Carbon dating puts them at 13,613 to 14,086 years old. “We were so happy to find something we could date,” she said. Then through more excavation through soil and peat, they found a nearby cache of stone tools.

Some amazing artifacts were found including fishhooks and an atlatl. This was a javelin throwing device. Far older than a bow and arrow, it’s used to increase distance and accuracy. They even found a wooden drill used to start fires. “What this is doing is just changing our idea of the way in which North America was first peopled,” Gauvreau said.

She recently presented the findings at the annual meeting of the Society for American Archeology, an event attended by 3,000 archeologists from all over the globe. “The material that we have recovered…has really helped us weave a narrative for the occupation of this site. It appears we had people sitting in one area making stone tools beside evidence of a fire pit, what we are calling a bean-shaped hearth,” she said.

This discovery deals another blow to the land bridge theory. Today, historians and archaeologists aren’t sure how North America was peopled by its original inhabitance. A previous study found that not enough game or edible plants would've been available on the land bridge, to sustain a trek between Siberia and Alaska. Also, historians placed the date of that crossing at 13,000 years ago. That date alongside this discovery doesn't match up.

This finding and others, support the theory that wayfarers came not on land but by sea. “From our site, it is apparent that they were rather adept sea mammal hunters," Gauvreau said.

Previously, the earliest found artifact, and so evidence of human occupation of the West Coast, was the Manis Mastodon spear tip. It was unearthed on Washington State’s Olympic Peninsula and dates back to about 13,800 BCE, which also challenges the land bridge theory.

To learn more about this fascinating archaeological discovery, click here: