Its unique method of creating energy is likely to be employed elsewhere in the space program. 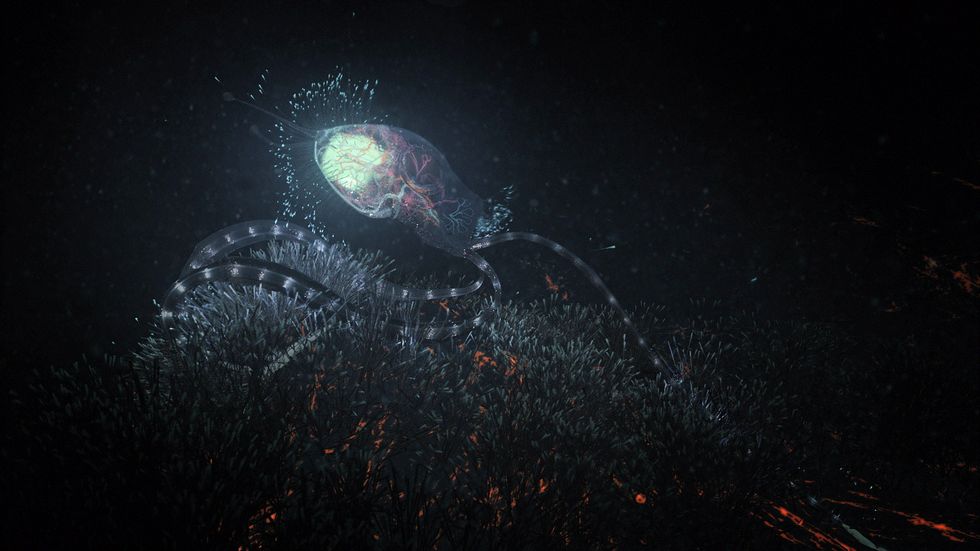 Artist's rendition of an alien octopus.

NASA scientists are keen to ply the frozen seas of Europa—Jupiter’s largest moon, as well as the bodies of liquid on other moons and exoplanets near Earth. But exactly how to do it has been something engineers have had trouble working out. One concept is a soft rover, a giant robotic squid. NASA has granted $100,000 to this project, as part of their Innovative Advanced Concepts (NIAC) program. It will be a soft robot with “bio-inspired” tentacles that can gather energy from alternations in local magnetic fields. That’s important as solar power won’t be possible this far out and nuclear fuel is heavy and expensive, perhaps even ill advised.

Since exploring a liquid surface is a new challenge for NASA, this proposal, from Mason Peck and Robert Shepherd of Cornell University, is of interest. The scientists wrote, “Optionally, the skin of the robot will be a stretchable, electroluminescent display for illuminating the local marine environment," enabling the rover to take images as it plods along. What’s bizarre is that this model closely resembles the alien octopus from the sci-fi movie Europa Report.

According to NASA's Innovative Advanced Concepts webpage, the rover gathers electromagnetic energy in order to perform water electrolysis, a process which separates the liquid into hydrogen and oxygen. Once performed, it can ignite these gases, propelling the rover through the sea or across the ground. The scientists say though an entirely new concept for powering a probe, successful laboratory experiments show that it is feasible.

Europa is of interest because it is one of the likeliest bodies in our solar system to harbor life. This is due to the large amount of liquid on its surface. It also has an atmosphere, complete with clouds, a water cycle, and weather. Even so, these are clouds of cyanide which give methane rain. That, along with the high levels of radiation the surface is exposed to, would mean that humans left unprotected would die on Europa very, very quickly.

But this moon is dynamic. Lots of chemical compounds can be found there. If we do find life on Europa, it will be radically different from any kind we know on Earth. Titan is terribly cold and its seas are mostly frozen on the surface. But perhaps microbes or some other forms of life exist in the murky depths, something like the bacteria we find clinging to geothermal vents on the bottom of the ocean. Or it could be a completely different kind of organism, one that obtains its energy by passing through magnetic fields, much like our rover. Discovering life that feeds on electromagnetic energy would completely revolutionize our understanding of biology.

Jupiter’s most fascinating moon has been dutifully mapped and several options for exploring it proposed, including a small robotic submarine. Due to the interest in it, NASA is planning to do a flyby in 2020. But there has been some discussion of dropping a rover to have a look around. If it is selected for such a mission and it works, the robot squid will likely be employed to explore other celestial bodies, such as Saturn’s moon Titan, which may also harbor life.

The rover’s new method of creating energy could also be used elsewhere. The robotic squid might even usher in a whole new era of space exploration where soft robots play a crucial role. The time for its unveiling is still far off, however. The squid is today at a technology readiness level of one or two. But it needs to be at level nine to be considered mission ready.