No one yet knows what challenges will confront humans living in deep space. 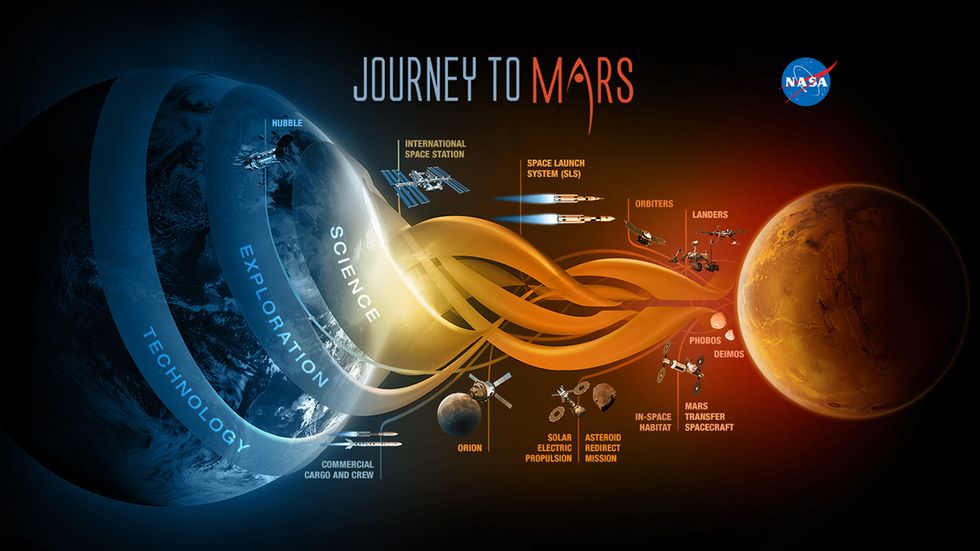 An illustration of the missions leading up to a manned mission to Mars. NASA.

NASA’s been in a slump lately. The International Space Station (ISS) is going to be retired somewhere in 2024-2028. It doesn’t even have a rocket right now to send anything up there, anyway. Not after retiring the space shuttle. The agency has been concentrating for six years on developing its new Space Launch System (SLS), to run missions to other parts of our solar system. You can argue that the SLS will be worth the wait. These will be the most powerful, heavy rockets NASA’s ever built.

Of course, there is a planned mission to land humans on Mars by 2033. But that’s far off, and the details have been fuzzy. That’s why space heads stood up and took notice recently, when NASA’s chief of human spaceflight, Bill Gerstenmaier, gave a presentation. Gerstenmaier revealed to the agency’s advisory council tentative plans for a lunar space station.

As part of its NextSTEP program, NASA has employed six companies to help it design the next generation of stations and vehicles. Boeing just announced its contribution—the Deep Space Gateway lunar station. Now NASA’s vision is starting to become clearer.

At the agency’s presentation, Gerstenmaier outlined plans to build and launch the station, which will allow Deep Space Transport (DST) craft to dock, aiding them in longer range missions, including to Mars. NASA’s press release called the station a place that “offers a true deep space environment,” for humans to get acclimated.

Deep Space Gateway will allow for more lunar missions as well, including robotic ones. The advantage is, if something goes wrong, crew members can try and make it back home again, a luxury not afforded to those headed for Mars.

Though there aren’t any hard dates yet, NASA plans to stagger missions, sending off one each year. It wants to work out how to coordinate the SLS, Orion, and the International Space Station (ISS), to support missions farther afield. Later on, they plan to set up a permanent installation in cislunar orbit (or near the moon).

The lunar station will be much smaller than the ISS, consisting of a power bus, a small habitat for the crew, a docking station, airlock, one research module, and one logistics one. For propulsion, they plan to use high power electric engines, a technology NASA itself has developed. This way, the station can position itself in one of a number of different orbits around the moon.

NASA is currently creating SLS and Orion spacecraft for the first two missions. Exploration Mission 1 (EM–1) should take place sometime next year. This will be a crewless journey. On other fronts, propulsion and habitation for the lunar station are in development. On board the ISS, life support systems and “related technologies,” are being tested.

From 2023 to 2026, NASA plans to send up pieces of and assemble the gateway. These missions will include four astronauts and should last between eight and 21 days. By the end of the 2020s, a one year mission will commence, to test systems required to travel to Mars, and elsewhere.

They’ll run experiments in the vicinity of the moon, in order to “build confidence that long-duration, distant human missions can be safely conducted with independence from Earth.” That's according to a statement on NASA’s website. Not only is the agency starting to build up infrastructure, they foresee challenges both technical and human. This space station will help develop strategies to overcome them.

How well can humans live in deep space? That isn’t really something that’s ever been tested. Astronauts and later colonists will need to endure long journeys aboard a Deep Space Transport (DST) craft, also being developed by Boeing. Somewhere around 2029, NASA plans to send astronauts aboard one of these, for a total of 300-400 days, somewhere near our moon.

The long-term goal is reusable craft that can ferry people to places such as Mars, return to the gateway, refuel, get serviced, and go back out again. SpaceX recently proved it possible to reuse rockets, in yet another successful landing, this time including a redeployment. Reusability will soon become the mainstay of space exploration, which brings the cost down exponentially.

This isn’t only a US mission. Besides private companies, other countries can lend a hand. Partners may offer hardware or “supplemental resources.” We’ve just dipped our toes in outer space’s vast waters, as a species, and had a few jaunts into the shallow end. Spreading out and really exploring the solar system is a feat beyond anything humanity has ever done.

These efforts could ultimately open up space to commercial ventures. And the time is nigh. The world will soon be running out of the precious minerals needed for consumer electronics. Space if full of them. In fact, it’s been predicted that asteroid mining will bear the world’s first trillionaire.