Kids who don’t do this might grow up to be psychopaths, researchers find

This behavior was witnessed in boys but not girls. 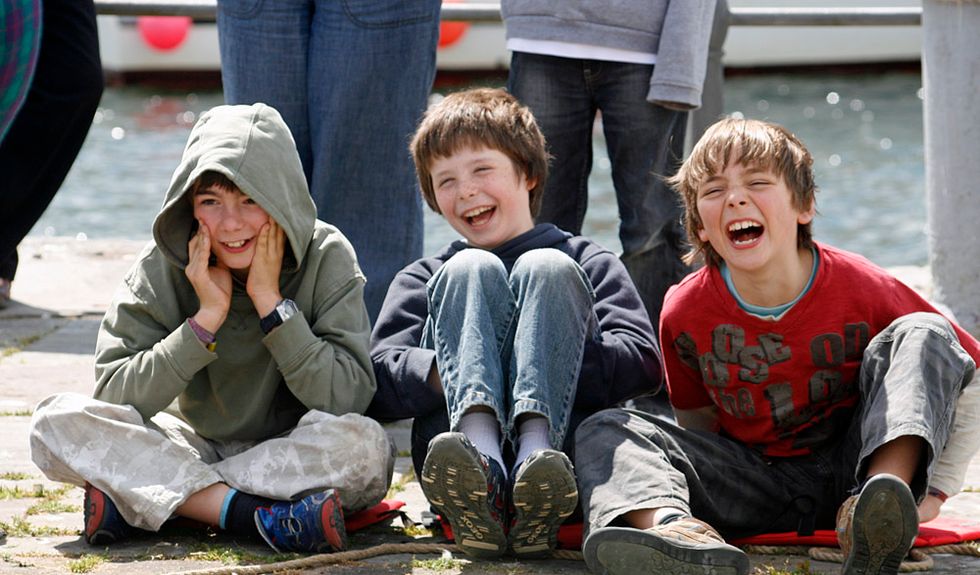 Laughter is contagious. Actually, even moods are “catchable.” Since social contagion is an established human reaction, this new report is as surprising as it is creepy. It finds that children with the potential to develop psychopathy tend not to laugh along with others. They are naturally inoculated from social laughter.

University College London (UCL) researchers in the UK came to this conclusion. Their findings were published in the journal Current Biology. Psychologists aren’t exactly sure what turns someone into a psychopath. A specific gene has been implicated, the so-called “warrior gene" The technical name is the MAOA-L gene.

But simply having the gene doesn’t doom you to become a psychopath. A certain environment or experience is required in order to allow those tendencies to express themselves. And not all of those who have the condition are dangerous. In fact, many CEOs and others at high station are known psychopaths.

This type of person can be charming, persuasive, courageous, and able take charge in a crisis. But they also tend to be remorseless, callous, and even ruthless. According to neuroscientist and psychiatrist Dr. Tara Swart, psychopathy is actually a spectrum.

The main component is an inability to empathize with others. This can lead to unfulfilling relationships, as partners often dislike emotional distance. Psychopathic types have difficulty bonding with others, are more prone to antisocial behavior, and at the extreme wing of the spectrum, tend toward hyper-sexuality and outbursts of violence.

It’s a myth that only adults deal with significant mental health issues. Usually, children show their first signs of a disorder before age 14. Because of this, psychologists are trying to see if they can identify certain characteristics in childhood, telltale signs of a budding psychopath.

Previous research has shown that most children who show psychopathic tendencies don’t want to participate in group activities, are disruptive, and show little regard for the emotions of their peers. In this study, researchers showed that boys with such tendencies said they didn’t want to laugh when others did. Brain scans showed that the sounds of laughter had less of a neurological response than in other children.

Professor Essi Viding was the senior author of this study. She hails from UCL’s department of Psychology & Language Sciences. She said, “Most studies have focused on how individuals with psychopathic traits process negative emotions and how their lack of response to them might explain their ability to aggress against other people.”

She added, “This prior work is important, but it has not fully addressed why these individuals fail to bond with others. We wanted to investigate how boys at risk of developing psychopathy process emotions that promote social affiliation, such as laughter.”

Researchers wrote that boys suspected of psychopathy “display reduced neural response to laughter in the supplementary motor area, a premotor region thought to facilitate motor readiness to join in during social behavior.” Meanwhile their auditory cortex lit up fine. This is the region here sound registers.

In boys with psychopathic tendencies, those brain areas responsible for participating and recognizing other’s emotions were far less active. “Those at highest risk for developing psychopathy additionally show reduced neural responses to laughter in the anterior insula,” researchers wrote. The supplementary motor area was also implicated.

One may have the “warrior gene,” but it takes a certain environment and upbringing to become a full-on psychopath. Getty Images.

92 boys were recruited for the study. Each one was between the ages of 11 and 16. While 62 showed psychopathic traits such as callousness (on a range from low to high) and disruptive behaviors, 30 others behaved normally and acted as controls. All the boys were from the same ethnicity and socioeconomic background.

Each boy listened to laughter while their brain was hooked up to an fMRI machine. Then they were asked “How much does hearing the sound make you feel like joining in and/or feeling the emotion?” and “How much does the sound reflect a genuinely felt emotion?” The participants were made to answer on a scale of 1 to 7, one being the least likely to want to join in.

Researchers conclude in the summary, “These findings suggest that atypical processing of laughter could represent a novel mechanism that impoverishes social relationships and increases risk for psychopathy and antisocial behavior.”

Professor Viding cautioned against labeling children as psychopaths. This is still considered an adult personality disorder. Long-terms studies however, show that certain children do run a higher risk for developing psychopathy later on. Prof. Viding said, “That does not mean that these children are destined to become antisocial or dangerous; rather, these findings shed new light on why they often make different choices from their peers.”

Children may show certain traits but only adults can develop the full-on condition. Credit: Getty Images.

Whether resistance to social laughter helps bring about psychopathy or if it’s a consequence of it isn’t currently known, and will likely be the subject of further research. Another question is how those with antisocial personality disorder or psychopathy process social affiliations. How such children respond to smiles, encouraging words, and outpourings of acceptance or love, will be subjects explored in future studies, along with whether the age of the child makes any difference.

“We are only now beginning to develop an understanding of how the processes underlying prosocial behavior might differ in these children,” Prof. Viding said. “Such understanding is essential if we are to improve current approaches to treatment for affected children and their families who need our help and support.”