Is the speed of light slowing down?

Several things in nature go faster than the speed of light, without challenging general relativity. 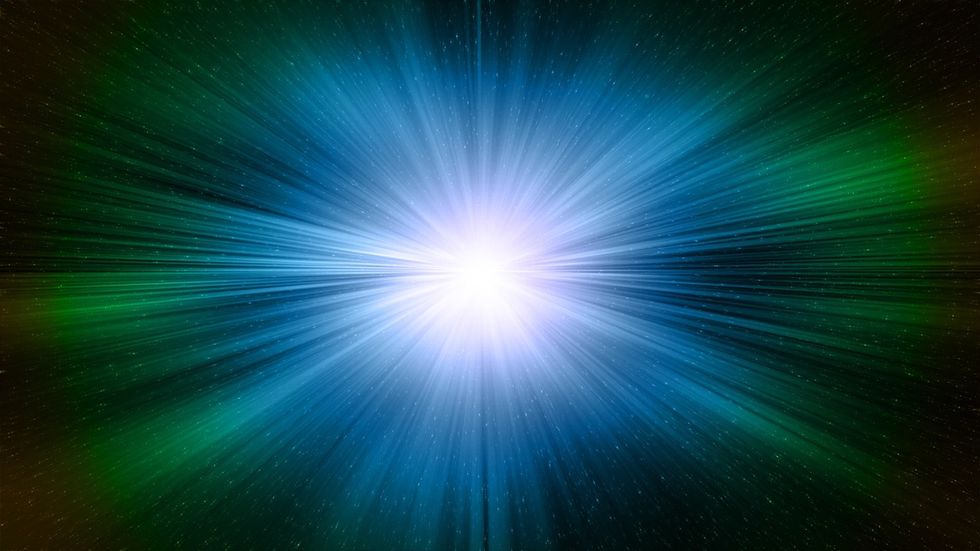 Modern physics rests on the foundational notion that the speed of light is a constant, which in a vacuum is 186,000 miles per second (299,792 km/s). Einstein established this within his theory of general relativity, first developed in 1906 when he was just 26 years-old. But what if it doesn’t? A few albeit controversial incidents in recent years challenge the idea that light always travels at a constant speed. And in fact, we've known for a long time that there are several phenomena that travel faster than light, without violating the theory of relativity.

For instance, whereas traveling faster than sound creates a sonic boom, traveling faster than light creates a "luminal boom." Russian scientist Pavel Alekseyevich Cherenkov discovered this in 1934, which won him the Nobel Prize in Physics in 1958. Cherenkov radiation can be observed in the core of a nuclear reactor. When the core is submerged in water to cool it, electrons move through the water faster than the speed of light, causing a luminal boom.

On another front, while no particle with mass can travel faster than light, the fabric of space can and does. According to Inflation Theory, immediately after the Big Bang, the universe doubled in size and then doubled again, in less than a trillionth of a trillionth of a second, much faster than the speed of light. More recently, astronomers have discovered that some galaxies, the distant ones anyway, move away from us faster than light speed, supposedly, pushed along by dark energy. The best estimate for the rate of acceleration for the universe is 68 kilometers per second per megaparsec. Quantum entanglement is another example of a faster-than-light interaction that doesn’t violate Einstein’s theory. When two particles are entangled, one can travel to its partner instantaneously, even if its mate is on the other side of the universe. Einstein called this, "Spooky action at a distance." The last example is a theoretical one (at least for now). If we were somehow able to warp or fold space-time, such as with a wormhole, it would allow a spacecraft to pass instantaneously from one side of space to another.

Einstein says that light acts pretty much the same throughout the universe. There’s a problem though. Today, scientists marvel at just how homogenous the universe is. One way we can tell, is by investigating the cosmic microwave background (CMB). This is essentially the light left over from the Big Bang, located in every corner of the universe.

No matter where you examine it, it’s always the same temperature, -454 Fº (-270 Cº). If that’s the case and light travels at a constant speed, how could it have made it from one edge of the universe to the other? To date, scientists have no idea, other than to say, some peculiar conditions must have existed in that early “inflation field.”

The idea of light slowing down over time was first proposed by Professor João Magueijo, from Imperial College London and his colleague, Dr. Niayesh Afshordi, of the Perimeter Institute in Canada. Their paper was submitted to Astrophysics in late 1998 and published shortly thereafter. Unfortunately, the proper instrumentation necessary to investigate the CMB to search for clues supporting it, wasn’t available at the time.

Magueijo and Afshordi eliminated the inflation field altogether. Instead, they argue that the intense heat that existed when the universe was young, ten thousand trillion trillion Cº, allowed particles—including photons (light particles), to move at an infinite speed. Light therefore traveled to every point in the universe, causing a uniformity in the CMB that we can observe today. “We can say what the fluctuations in the early universe would have looked like,” Afshordi told The Guardian, “and these are the fluctuations that grow to form planets, stars, and galaxies.” An experiment the following year lent credence to Magueijo and Afshordi’s theory.

In 1999, Lene Vestergaard Hau at Harvard stunned the world, after she conducted an experiment where she slowed light down to just under 40 mph (64 kph). Hau studies materials at a few degrees above absolute zero. In such an environment, atoms move very slowly. They begin to overlap, turning into what’s known as the Bose-Einstein condensate. Here, the atoms become one big cloud, and behave like one giant atom.

Hau shot two lasers through such a cloud, comprised of sodium atoms 0.008 inches (0.2 mm) wide. The first blast changed the quantum nature of the cloud. This increased the cloud’s refractive index, which slowed the second beam to 38 mph (61 kph). Refraction is when light or radio waves are bent or distorted when passing from one medium into another.

A discovery in 2001 also lent credence to the variable light theory. The eminent astronomer John Webb made an observation while studying quasars in deep space. Quasars are luminescent bodies billions of times as massive as our sun, which are powered by black holes. Its luminosity comes from an accretion disk, made up of gas, enveloping it.

Webb found that one particular quasar when nearing interstellar clouds, absorbed a different type of photon than would’ve been predicted. Only two things could explain this. Either its charge had changed or the speed of light had. In 2002 an Australian team, led by theoretical physicist Paul Davies, found that it couldn’t have changed polarity, as this would’ve violated the Second Law of Thermodynamics.

Another breakthrough study in 2015 further challenged this staple of science. Scottish physicists from Glasgow and Heriot-Watt universities successfully slowed a photon at room temperature, without refraction. They basically built a racetrack for photons. It was made so that two photons raced side-by-side.

One track was unencumbered. The other held a “mask” which resembled a target with a bullseye. In the center was a passageway so narrow, the photon had to change shape to squeeze through. It slowed that photon down about one micron (micrometer), not a lot, but enough to prove that light doesn’t always travel at a constant speed.

By now, instrumentation had improved to the point where the CMB can be successfully probed. As such, in 2016 João Magueijo and Niayesh Afshordi published another paper, this time in the journal Physical Review D. They are currently measuring different areas of the CMB, and studying the distribution of galaxies, seeking clues to support their claim that light in the universe's earliest moments broke free of it's presumed speed limit.

Again, this is a fringe theory. And yet, the implications are astounding. "The whole of physics is predicated on the constancy of the speed of light," Magueijo told Vice’s Motherboard. "So we had to find ways to change the speed of light without wrecking the whole thing." Their calculations should be complete by 2021.

Want to learn more about the speed of light and whether it’s actually a constant, Click here.