Is the Mystery of the Abominable Snowman Finally Solved?

Lots of colorful characters went looking for the Yeti. And there have been several hoaxes. 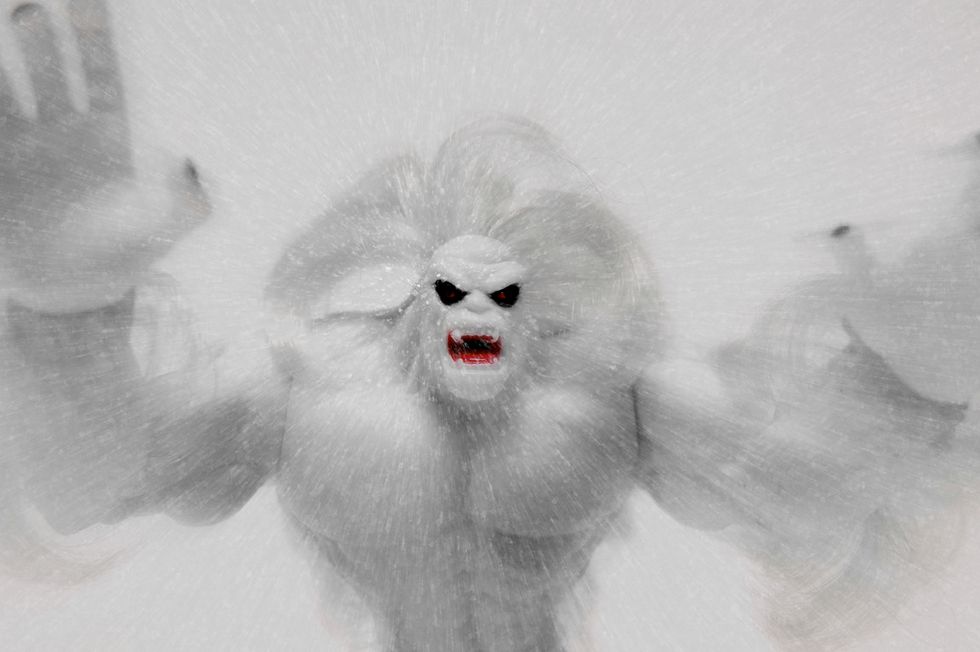 Legends of a hulking half-man, half-ape roaming nearby mountains or forests, is part of many cultural traditions around the world. In America we have Bigfoot or Sasquatch. The Yeti is the incarnation known to the Himalayan region. Footprints and sightings abound as do colorful myths and firsthand encounters. In popular culture, the creature has spawned a TV show on the Travel Channel, a halfway decent SyFy original movie, “Rage of the Yeti,” and a number of guest appearance on a smattering of cartoons, movies, and TV shows.

The Sherpa of Nepal, indigenous people and guides to the explorers of Everest and other Himalayan mountains, have held the Yeti as an important part of their history and folklore for at least five hundred years. In their tales, the appearance of or even hearing the beast is a sign of foreboding.

The creature is said to be muscular, covered in shaggy reddish brown or gray fur, and weighing 200-400 lbs. (90-181 kg). Accounts make it anywhere from five to nine feet tall. According to legend, they live high up in the mountains and seeing a Yeti or even hearing it could freeze you in fright, leaving you vulnerable to attack.

The Yeti has been part of Sherpa culture for hundreds of years. Getty Images.

Colonel Charles Howard-Bury, British adventurer, botanist, and conservative politician, was the first to introduce the Yeti to the Western world, after a 1921 Everest expedition. He attempted to reach the summit from the Tibetan plateau or the north face of the mountain. He’d seen usual footprints about 17,000 ft. up and when he asked his guides about them, they told him stories of the mysterious “man bear” or “snow man.”

Journalist Henry Newman interviewed Howard-Bury about it. It was he who first named the creature the Abominable Snowman. Sir Edmund Hilary, the first ever to reach Everest’s peak, also searched for the Yeti. But it wasn’t until 1951 that widespread interest was sparked. That’s when a photo of a footprint hit the press, taken by British explorer Eric Shipton.

Several expeditions have been launched since, along with a number of hoaxes. In one 1986 case, experienced Himalayan hiker Anthony Wooldridge claimed to have seen a Yeti and took convincing photos of it. A group of experts launched the next year however, found that Wooldridge had taken pictures of a rock outcropping that from a distance looked like an upright figure.

Another famous case was in 2010 when two Chinese hunters from Sichuan province claimed to not only have seen a Yeti but to have captured one. Their quarry turned out to be a civet, a cat-like animal with a face like a kangaroo. This one had lost all its hair due to a disease. Photographs of footprints about. Some have theorized these are from a holdover of an extinct species of ape, bear, or hominid. What’s made scientists skeptical is the lack of fossils or remains.

Italian mountaineer Reinhold Messner, who spent a considerable amount of time in the Himalayas, was the first to insist that the footprints were caused by indigenous wildlife. After spotting a footprint himself in the 1980s, he returned to the “Roof of the World” dozens of times, and slowly became convinced that the Yeti was actually a bear.

In 2013, a sliver of scientific evidence was finally offered. Oxford geneticist Bryan Sykes, announced that he and colleagues matched alleged Yeti hair samples with the DNA of an ancient polar bear species, gone extinct. The results of their study were published in the journal Proceedings of the Royal Society B. Other notable figures on that study were Eliecer Gutierrez of the Smithsonian Institute and Ronald Pine with the University of Kansas' Natural History Museum and Biodiversity Research Center.

The researchers examined hair samples from this particular “cryptid” or undiscovered species. A total of 50 samples were acquired from museums and private collections from all over the world. 36 were selected for sequencing. These samples were matched against a database named GenBank. IT houses all of the genomes of all the species sequenced thus far.

There were a lot of dead ends. Alaskan Bigfoot samples and Russian Almas or wild men, turned out to be hairs from a variety of native species, for instance goats, bears, wild cats, and so on. What’s remarkable is, two Yeti samples, one from Nepal and the other Bhutan, got interesting hits.

These matched with 100% accuracy a piece of ancient polar bear jawbone discovered in Svalbard, Norway. It lived between 40,000 and 120,000 years ago. Sykes and colleagues say it’s closely related to the brown bear. Bears have been known to interbreed. Two follow-ups studies have been conducted, as some scientists have questioned this first study’s methods. But so far they haven’t discredited the brown bear hypothesis.

Prof. Sykes wrote a book about the endeavor entitled, The Nature of the Beast. He believes a hybrid species of brown bear, whose ancestor mated with this ancient polar bear, may today roam the Himalayas in small numbers. The bear itself however is yet to be found. Until then, cryptozoologists or those who study unsubstantiated creatures, can remain skeptical.

Recently, social activist, conservationist, and author Daniel Taylor tossed in his own theory. The Yeti is a type of Asian black bear. Taylor grew up in India where he became fascinated by the Yeti story. He recently traveled back to the Himalayas to search for it.

Taylor was advised by the King of Nepal to try the remote Barun Valley, a microclimate of dense jungle that’s seen little exploration. He found so-called Yeti tracks and showed them to a local hunter, who said a “tree bear” had made them. Its print looks like a humans, the theory goes, as it has an opposable digit used to hang on bamboo or tree limbs. But what might this bear be doing high in the Himalayas above the tree line?

Taylor has since worked to preserve the valley, which resulted in the establishment of the Makalu-Barun National Park, where if you visit in the future, you can walk the (soon to be constructed) Yeti trail. Taylor wrote about his theory, explorations, and conservation project in his new book, Yeti: The Ecology of a Mystery.

To learn about the history of Bigfoot, America’s Yeti click here: