How does music affect your eating habits?

Believe it or not, our eating habits are influenced by what music is playing and other forces that we may not be consciously aware of. 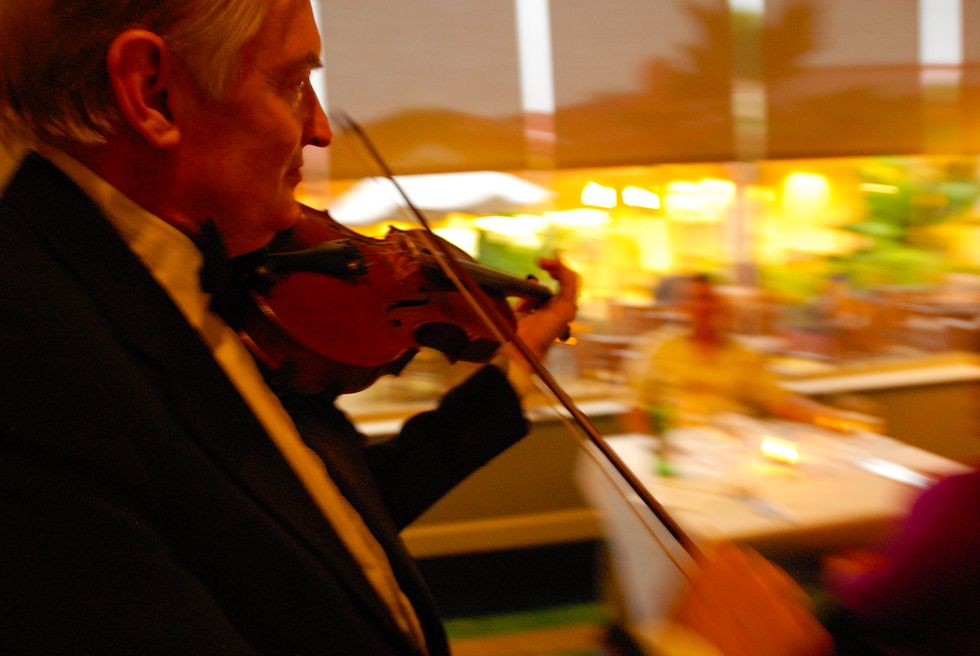 When mealtime rolls around and we’re considering what we’ll have to eat, the last thing we think about is what’s on our iPod, and what volume it's playing at. Maybe we should. Do you think you eat healthier when soft or loud music is playing? Researchers at the University of South Florida, Tampa, ran several experiments to find out. Their study was published in the Journal of the Academy of Marketing Science. In it they wrote, “[T]his is the first research to examine the effects of ambient music volume on choices between healthy and unhealthy foods."

If you’re a fan of all things rock’n roll like I am (also ‘90s hip-hop), you’ll probably say loud music has no effect on what you’re eating. You’d be dead wrong. Over several experiments, USF researchers came to understand that soft music influences people to make healthier choices, while loud music causes them to choose less healthful options.

Restaurants, cafes, and eateries are more and more using ambient music to influence consumers in particular ways. Yet, customers usually sail through these environments completely unaware. There’s a high level of variation, however, depending on where you visit. Some places purposely create a soft ambiance and others, a loud, noisy atmosphere.

To find out how background music affected food choice, visitors to one café in Stockholm, Sweden, over the course of two days, encountered many different kinds of music, played on a loop. Volume levels also varied from 55 to 70 decibels. Specific items were selected for the menu and researchers tallied what people had while a certain genre was playing, at a certain volume. These included healthy choices such as salad, neutral choices like coffee or tea, and unhealthy ones, such as cakes and chocolates.

When quieter music played, people were 10% more likely to select healthy choices. When louder music was on, they were more likely to make less healthful ones. In the second study, researchers carried out the same experiment in a supermarket. The played several different types of music, either at high or low volume and recorded customer purchases in each phase. They got the same results as the previous study.

In a third experiment, they tested quiet, loud, and no music at all in a room, and each type’s influence on the food choices of 71 college students. Classical music was selected and played at 55-70 decibels. After a few minutes, the students were offered a choice of fruit salad or chocolate cake. When exposed to loud music, students chose the chocolate cake 44% of the time. When no music was playing, around half chose the cake. When soft music played, however, students chose the cake only 14% of the time. More fascinating still, the genre didn’t matter. The same experiment was played with loud or quiet heavy metal music, and researchers got the same results. Thereby proving one of the coolest finds in the research: influence lies with volume, not genre.

Why this pattern emerges is interesting. USF scientists believe it all surrounds relaxation. When high volume music or noise fills a space, this excites a person, which persuades them to make more exciting and less healthy choices. By contrast, low volume music tends to make a person feel relaxed, which is more conducive to healthy ones. USF researchers hope this will allow people to be cognizant of their surroundings and make better choices, regardless of what’s on the sound system.

Music played at loud volume can influence us to make unhealthy food choices, regardless of genre. Image credit: Getty Images.

This isn’t the first study on how background music can affect diet. Previous research has shown that loud music played in a restaurant increases soda and alcohol consumption, and slow-tempo music leads to longer stays and higher beverage orders. Oxford University professor Charles Spence, Ph.D., has gone one step farther. Through his research, he's discovered that particular types of music can bring out certain flavors in the food. “You can play specific types of music to sonically season a dish,” he told Weight Watchers.

Certain genres tease out sweetness, bitterness, spiciness, and so on. “One cafe just opened up in Vietnam where they play only sweet music—think tinkling, high-pitched piano or wind chimes,” Spence said. “The idea is that they’ll be able to add a little less sugar to their cakes and drinks.” The takeaway of all this is that the human brain is noticing and therefore influenced by all types of things in our environment, whether we’re aware of it or not. The more we come to understand these hidden influences, the more we’ll be able to steer ourselves in the right direction.

Want to learn more about how music affects your brain? Click here: