"Sports is war minus the shooting," said George Orwell. So far, however, a thawing of tensions between North Korea and South Korea has been the big political story of the 2018 Olympic Games. 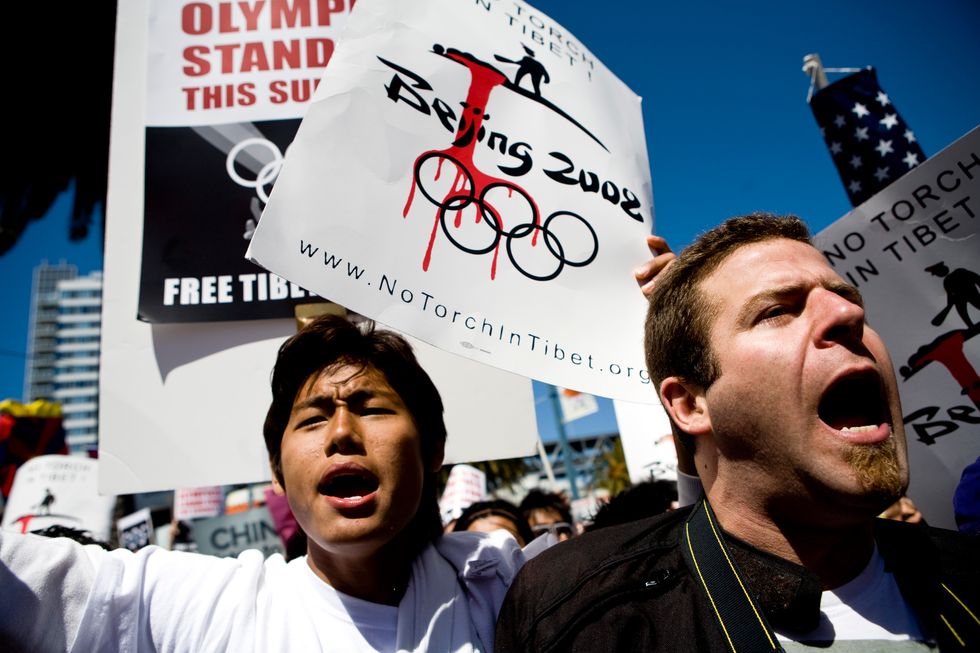 Protestors sounding off about China’s policies in the run-up to the 2008 Beijing Olympics. Credit: Getty Images.

"Sports is war minus the shooting," said George Orwell.

So far, however, a thawing of tensions between North Korea and South Korea as a result of the 2018 Olympic Games in Pyeongchang—exemplified by their marching together under a common flag during the opening ceremony—has been the big political story surrounding these Games.

US Vice President Mike Pence, who will officially be attending the sporting competitions in South Korea as a spectator, left everyone in suspense when he recently said that he may enter into behind-the-scenes political negotiations with North Korean officials.

It's worth noting that during the 2016 summer Olympics in Rio de Janiero, Brazil, the big political story was the Russian doping scandal. So, are the Olympics only an occasional stage for great power rivalries, set against the perfect metaphor of physical competition between individual athletes? Or is it possible that the Olympic Games are better understood as a pretext for political maneuvering and gamesmanship under the guise of apolitical sport?

The first Olympic Games are thought to have taken place on the Olympian fields of Greece beginning in 776 B.C.E. and continued for 12 centuries. They were eventually banned by Emperor Theodosius in 393 CE, after Christianity took hold of the Roman Empire. By then, the games were considered a pagan ritual to be done away with.

That was to be expected. They were originally held in honor of the 11 Olympian gods. The temples of Zeus and Hera could be found here. At their height, The Games became so popular, spectators would cram a stadium seating 40,000. This place was considered a sanctuary, free of warfare, operating under what was known as the Olympic Truce. But that didn’t keep politics from seeping in.

The palaestra at Olympia, a gym inside the stadium where ancient athletes came to prepare and train. Credit: Bgabel at Wikivoyage.

In 365 BCE, the Arcadians and the Pisatans took control of Elis, a neutral city-state which held and administered to the Olympia fields and the Games. The interlopers presided over the 104th Olympiad. After being summarily dislodged by the Aleans the following year, the preceding Games were considered null and void. Forget Russia’s doping scandal. They’ve got nothing on the kind of infractions that took place during ancient times. By the 4th century, bronze statues of Zeus—called zanes, the plural of Zeus—lined the Olympic stadium route. These were commissioned with funds raised by fining athletes for lying, cheating, or bribing opponents or officials. The first six zanes were paid for by one athlete alone, a boxer named Eupolos of Thessaly. In 388 BCE during the 98th Olympiad, he bribed his adversaries to purposely go down, giving him the win. Foul play wasn’t the only way to try and gain an advantage. Several hex tablets have been found, essentially pleadings with underworld deities to curse opponents.

But it became more than a venue for foul play. The popularity among the ancient Greek world would soon see the Olympics transformed into a stage and would be used to announce treaties and alliances, and as a backdrop for negotiations between city-states. For instance, one 100-year military treaty described by Thucydides was carved into a bronze pillar and placed in Olympia itself.

Even Alexander the Great, who is said to have loathed sport, saw the importance of the Games as a political stage. During one Olympiad, he declared that all exiles cold return to their cities unharmed, except those who had been charged with murder. He also set his oldest soldiers free from military service, 10,000 in all, paid off their debts, and let them retire back to Macedonia.

After being snuffed out at the end of the 4th century, the Games were revived in the late 19th by a Frenchman, Baron Pierre de Coubertin. Ever since, the Summer Olympics have taken place every four years (as they did in ancient times), only pausing during the two World Wars. The Winter Olympics however, weren’t introduced until 1924. Politics have always been a part of the modern Games as well.

The modern Olympics: Politics by other means?

For instance, Coubertin had to convince France and Germany to compete against one another during the first (modern) Olympics, because both sides still smarted from the Franco-Prussian War (1870-71). Things didn’t improve. The 1908 London Games were besmirched by animosity between American athletes and British organizers. While Germany wasn’t even invited in 1920, 1924, or 1948.

Berlin hosted the 1936 Summer Olympics, where the Nazi regime tried to highlight the superiority of its Aryan philosophy. That ideology quickly floundered with the world watching, when African-American long jumper Jesse Owens won four gold medals and set a long jump world record, one that wouldn’t be broken for the next 25 years.

Hitler wanted to use the 1936 Berlin Games to highlight the superiority of the Aryan race. Some credit Jesse Owens for single-handedly defeating that mission. Credit: Getty Images.

Boycotts of the Olympics have been common. A number of Middle Eastern countries including Iraq, Lebanon, and Egypt boycotted the 1956 Melbourne Games to call attention to the Suez Crisis. In another instance during the 1976 Montreal Games, 28 African countries stayed home, outraged that the New Zealand rugby team had toured apartheid South Africa.

That wasn’t the largest boycott, however. In 1980, sixty-two countries abstained from the Moscow Games to voice their disapproval of the USSR’s invasion of Afghanistan that took place one year earlier. As a result, fourteen Soviet bloc countries returned the favor, snubbing the 1984 Los Angeles’s Olympics.

Politically, these worldwide celebrations of sport reflect their time and place. For example, the 1968 Mexico City Games saw 300 student protestors killed by police in the first ten days. That same year, two African American athletes who competed in the 200-meter dash, Tommie Smith and John Carlos, protested racism in America during the medal ceremony. Smith won the gold while Carlos took home the bronze. As the national anthem played, each man raised a clenched fist in the air, the symbol of the Black Power movement. They were soon removed from the Olympic village.

The 1972 Munich Games saw Palestinian terrorists attack Israeli athletes, killing 11 of them. More recent iterations such as Beijing 2008 and Rio 2016 have highlighted inequality, poverty, displacement and corruption. One proposed option to take politics out of the games is to separate athletes from the national teams they belong to and just let them compete individually.

But that would mean a smaller viewership and less interest. Perhaps Orwell, who considered politics and athleticism indivisible in the context of international competition, was right afterall.