Four-strand DNA May Hold the Secret to a Cancer Cure

Most of us have heard of the double helix. But quadruple helix DNA? 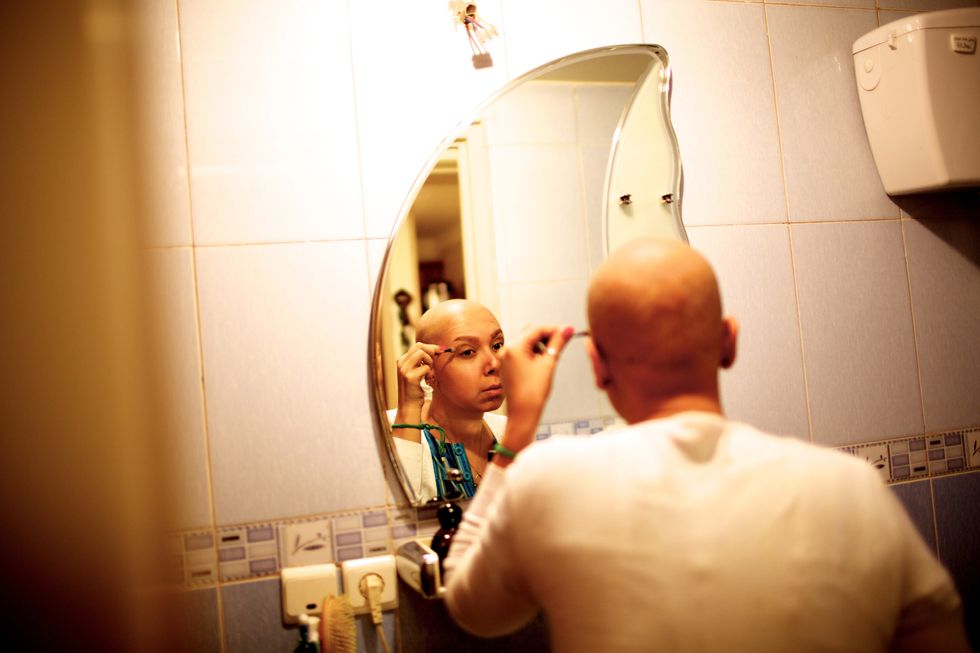 A woman with cancer looking into the mirror.

We remember the double helix from science class, that elegant swirl of genes that make up all life on earth. By contrast, quadruple strand DNA sounds like something out of a sci-fi horror movie. Maybe something to do with a cloned monster that gets out and tears up the town, until a small band of plucky heroes take it down. Though it sounds fantastic, we all contain quadruple strand DNA. And it fact, it has been implicated in a real monster. But a plucky band of scientists who discovered it, may unlock its potential for fighting this serious and real disease that potentially, threatens us all.

A recent study, out of the University of Cambridge in the UK, finds that four-strand DNA has the potential to offer new targets for cancer treatment. These control certain genes, particularly those associated with cancer. This discovery, published in the journal Nature Genetics, may also help to advance the small, but growing sector known as personalized medicine. The more information we have about the genetic makeup of a patient, the better we can diagnose, treat, and even prevent diseases.

One problem with cancer treatments today is that they attack all cells indiscriminately. Chemotherapy for instance, hurts healthy cells and cancerous ones alike. With targeted therapy, only the cancer cells are damaged, leaving healthy ones alone. To do so, researchers must find what is unique about cancer cells. They may now have found one important aspect.

Chemotherapy drugs have harsh side effects, and injure cancer cells and healthy ones alike. Scientists are looking for options that only target cancer.

Four-strand DNA is known as G-quadruplexes, because they occur in regions of DNA with a lot guanine or G. This is one of the four main nucleic acids that make up RNA and DNA. The others include adenine (A), cytosine (C), and thymine (T). Watson and Crick discovered the double helix some sixty years ago, a structure they described as a twisty ladder.

G-quadruplexes are more like a tower with many floors. Each floor is known as a tetrad. Guanine (G) resides at all four corners, on each floor, held in place by hydrogen bonds. Cambridge researchers also found that a strand of DNA can fold itself into a G-quadruplex.

Those scientists who first discovered quadruple-strand DNA a few years ago, are behind this present finding. Professor Shankar Balasubramanian was the senior author on the study. He is a professor of medicinal chemistry at the university, and an investigator at the Cancer Research UK Cambridge Institute.

At first, there were a lot of theories on how G-quadruplexes might be associated with cancer. "But what we've found is that even in non-cancer cells, these structures seem to come and go in a way that's linked to genes being switched on or off," Balasubramanian said.

Model of a G-quadraplex. Image by TimVickers at English Wikipedia (Transferred from en.wikipedia to Commons.) [Public domain], via Wikimedia Commons

In this study, the professor and his team used small molecules to alter pre-cancerous cells, in order to search for G-quadruplexes. About 10,000 were located, mostly in areas that control gene behavior. They were particularly prominent around those genes associated with cancer.

Dr. Robert Hansel-Hertsch was the lead author on this project. He is a postdoctoral research associate at the university. Hansel-Hertsch said that G-quadruplexes were discovered in areas of the genome known for transcription, or rewriting DNA into other cells. They also control functioning and ultimately, the fate of cells.

"The finding that these structures may help regulate the way that information is encoded and decoded in the genome will change the way we think this process works," he said. Researchers now think that quadruple strand DNA acts similarly to epigenetic tags, in a process known as methylation.

This study suggests that four-strand DNA could become the next target for novel and precision cancer treatment. According to Prof. Balasubramanian, cancer cells respond well to small molecules that interact with G-quadruplexes. This suggests that these structures may exist in large numbers in pre-cancerous and cancerous cells.

Someday, cancer treatment may come down to flipping a few biochemical “switches,” stopping the cancer from multiplying and spreading. On this, Prof. Balasubramanian said, "Figuring out the fundamental processes that cancer cells use to switch genes on and off could help scientists develop new treatments that work against many types of the disease."