Forget Colonization. The UAE Plans to Build a City on Mars by 2117

“Human ambitions have no limits,” the Sheikh announcing the project said. 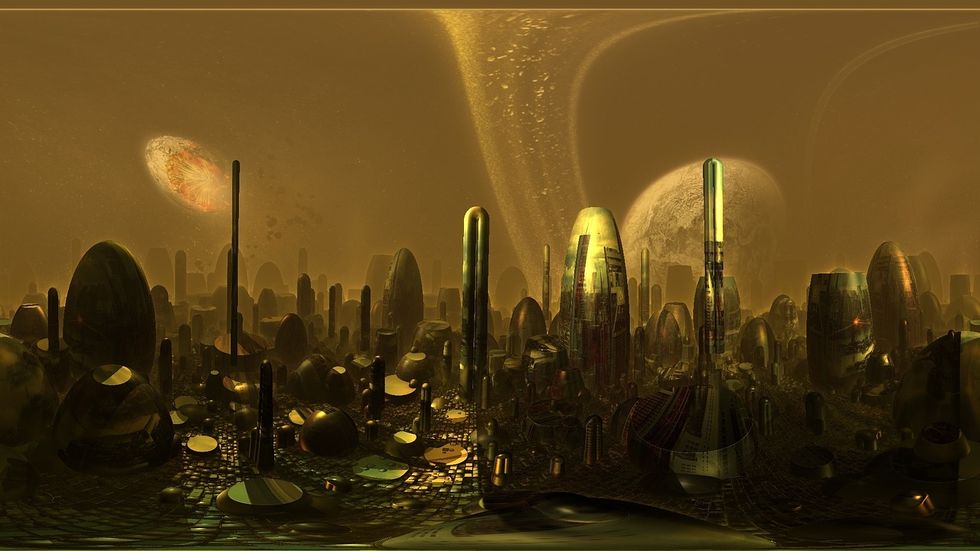 The US, Russia, China, India, the EU, and even private companies are in a race to colonize Mars. There are lots of technical things to work out, from food supply to protection from solar radiation. Though few smaller countries have jumped into the Mars race thus far, the United Arab Emirates (UAE), is looking far beyond planting a flag or a few threadbare shelters. Their motto seems to be, go big or go home. The country recently released its plan to build a futuristic city on the Red Planet by 2117. The proposal and accompanying images look like something ripped from the pages of a sci-fi novel.

The UAE is a collective, an oil rich federation of seven smaller states. They are late coming to the space race. But the country developed extremely quickly, from a Gulf backwater to one of the richest and most developed countries in the region, in less than half a century.

A rustic, pearl diving village a little over 40 years ago, Dubai today is a glittering metropolis full of modern skyscrapers. It even boasts the world’s tallest. This financial hub of the region hosts impressive sites including an archipelago of manmade, palm islands, “The World” islands, and the planet’s largest indoor ski resort, among others. Read into this, maybe they can pull it off.

The UAE launched its space program in 2014. Though a newcomer, if the country’s development is any indication, it could become a major player in the next great space race. The Emerati agency plans to work with their British and French counterparts, beginning next year, in order to send up an unmanned Mars probe named “Hope,” by 2021, reaching the Red Planet two years later. The Martian city announcement was made recently at the World Government Summit in Dubai. Visitors were able to gaze at a 3D model of the proposed city.

Model of the city. HH Sheikh Mohammed via Twitter.

Entering into the space race adds cache to a country. It telegraphs that you’ve come a long way, in terms of wealth and technological development. There’s no way they’ll be the first to put people on Mars, starting their own space agency so late. Instead, the UAE found a different way to distinguish itself. No newcomer to city design in and of itself, officials are planning to establish the first urban living community, based on human happiness, in oncoming years. So placing the first metropolis on Mars may not be out of its wheelhouse.

The “City of Wisdom” as it’s being called, will be about the size of Chicago, according to the announcement. Vice president of the UAE and sovereign of Dubai, Sheikh Mohammed bin Rashid Al Maktoum, announced the project. “Human ambitions have no limits, and whoever looks into the scientific breakthroughs in the current century believes that human abilities can realize the most important human dream,” he said.

The first step he said, was building up science programs in schools and universities. Just as Sputnik triggered advanced science and math education programs in the US, so too will this spur such learning in the UAE. Besides that, the Sheikh plans to build an Emirate scientific group, which will include international experts. These will be broken up into teams.

Each will investigate a certain aspect, such as the faster transportation to Mars, as it now takes 150-300 days, depending on where each planet is in their journey around the sun. That’s way too slow, considering that the first toehold colony will be supplied with dried food from Earth, at least at first, and will depend on such shipments. Other teams will look at growing food, creating energy, methods of transportation across the planet’s surface, and more.

Scientific and research committee manager Saaed Al Gergawi, told CNBC that the city is expected to house 600,000 people. He said, “We came up with that number because it's like someone going to an exotic island, not everyone can go first, then we get advancement of rocket tech, which makes people move there easily, then the advancement of oxygen tech to make it more earth like, which would incentivize people.”

A lot of questions remain. For instance, will substantial radiation shielding be needed? If so, how do they plan on doing it? Solar radiation bombards the Red Planet, which will put human health at serious risk. One theoretical NASA plan is to build a magnetic shield which protects the planet. But if it doesn’t work, buildings will have to have special shielding in order to protect colonists.

Other questions include, How will the city be built, and where on the surface will it reside? This is a long-term project, but the expansive timeline could give the UAE space agency the time it needs, to make sure this considerable feat becomes a reality. As the earliest colonies take shape in the next few decades, UAE scientists will be able to adjust their plans to fit conditions on the ground.

To learn more about the UAE project, click here: