Could modern humans survive an asteroid impact, like what killed the dinosaurs?

If the bolide had hit just 30 seconds later, we’d be looking at a very different Earth. 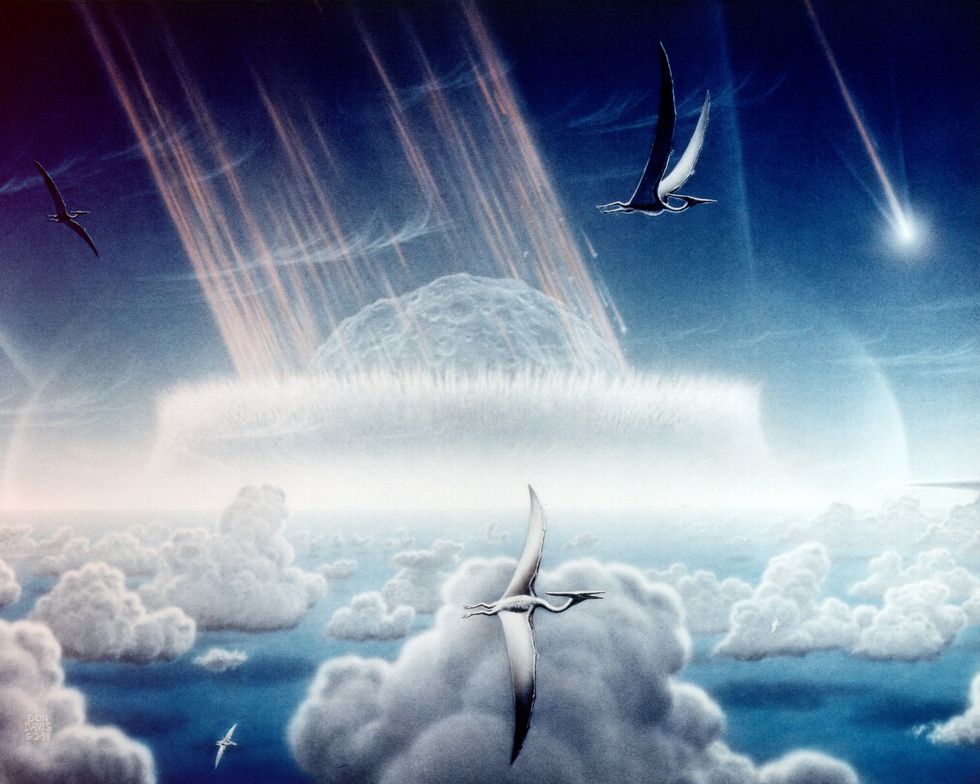 We know that an enormous meteorite hit the Gulf of Mexico some 66 million of years ago, shooting dangerous gases, dust, and debris into the upper atmosphere, blotting out the sun, and killing off most of the plant life on Earth. Large herbivores followed and eventually the carnivores that preyed upon them. Note however that one recent, exhaustive study found that many of the dinosaurs were already in decline, way before the bolide or meteorite’s impact.

Had the asteroid hit just 30 seconds later (or sooner), landing more in the Atlantic or Pacific, rather than just off the coast of Mexico, we may have had more, non-avian dinosaurs running around today. Instead, the bolide smashed into the Earth with a force equivalent to ten billion nuclear bombs.

Our ancient, tiny mammalian ancestors survived, their rodent-like bodies cowering as they witnessed one of the greatest mass extinction events ever to occur on our planet. Of course, they probably didn’t have brains developed enough to fully comprehend it. Besides the stench of death filling the air and the massive bodies piling up hither and yon, acid rain fell and volcanic eruptions shook the Earth, sullied the air, and scarred the landscape.

Smallness and requiring little food helped our ancient, shrew-like ancestors survive, which begs the question, could we modern humans make out okay if such an event happened today? Research surrounding another, similar incident suggests so, but it’s complicated. Around 790,000 years ago another asteroid about a kilometer (approx. 0.62 mi) long struck the Earth with such a force that it sent debris hurtling into the atmosphere, which ended up covering one tenth of the Earth’s surface. The crater has yet to be found. Scientists say it would be about 40–100 km (approx. 24-62 mi) in diameter.

The impact site of the meteorite that struck nearly 800,000 years ago hasn’t been found. Credit: By USGS/D. Roddy.

What’s been unearthed are these glassy rocks called tektites. Larger varieties can weigh up to 20 kilograms (44 lbs.).  Scientists recently analyzed these stones. Their findings were published in the journal Geology. This was the largest such event to occur during the time when humans were known to be on Earth and evolving (as they always are). Researchers say the event gives us clues as to whether modern humans could survive a dinosaur-size cataclysm today. The answer is yes, but it would be difficult.

So far, tektites have been found in Australia, Asia, and Antarctica. In this study, astrobiologist and geochemist Aaron Cavosie of Curtin University in Australia, along with colleagues, looked into the chemical makeup of three tektites found in Thailand. Researchers studied minute crystals of zircon, each about the width of a human hair, within the tektites.

These showed signs of the rare mineral reidite, which disappears seconds after being formed. “Reidite requires substantially higher shock pressures to form,” Cavosie said. High temperatures are needed as well. The orientation of the zircon in the tektites points to an impact occurring somewhere in Southeast Asia, probably near Thailand. Though these samples tell a lot, what’s missing is the exact location of the impact site. It’s mind-boggling that such a large crater has yet to be found.

“Our not-too-distant ancestors witnessed this impact,” Cavosie said. “They might have been dragging their knuckles, but an event like the formation of a 50- to 100-kilometer-diameter impact is sure to have gotten their attention.” Further studies examining tektites may yet reveal the crater’s location.

Even though this was a catastrophic event, our ancestors were able to survive and thrive, as the debris shot up into the atmosphere must've caused significant changes to the climate. How this influenced our ancestors and perhaps changed the course of human evolution is difficult to discern, though more clues may help us get a better understanding of that.

So what if a comet or a serious asteroid collided with the Earth? Most scientists say our planet is threatened by such an asteroid about every million years or so. We’re not due for one any time soon. Most of the asteroids out there lie between Mars and Jupiter and won’t threaten Earth ever.

There are thousands though which could potentially hit us. Most are the size of a compact car or smaller and burn up in the atmosphere. A few are a bit larger and could do great damage to say a house or even a city, depending on the size, but wouldn’t threaten all life on Earth or anything.

NASA’s Planetary Defense Coordination Office (PDCO) tracks near-Earth objects (NEOs) of significant size with the potential to hit our planet. It’s a collaborative effort involving observatories and universities all over the world. The perennial question is whether or not an asteroid looks as if it’s inside the “keyhole,” meaning it has the potential to make impact with Earth.

If a serious meteorite were to hit the Earth, would we survive? Credit: Comfreak, Pixababy.

Besides a collision, a sizeable object passing close by the Earth could throw the planet’s orbit off. So far, deflection strategies haven’t been decided upon. Planting a nuclear bomb inside a potentially hazardous asteroid, or nudging it off course with rockets or a solar sail, are some other the methods that have been proposed.

Should we fail and a large asteroid once again crash into our world, causing a long-term impact winter, most of the plant life would die off within weeks. Large trees could last decades due to a buildup of sugar in their systems and a slow metabolism. Not much life would exist beyond that, save for microbes and small creatures.

Humans could survive if they went deep underground to take advantage of heat found there, or if we built isolated habitats inside domes. Of course, it’s best to safeguard our precious planet. And although attaching a solar sail to an asteroid may sound fantastical, most scientists believe it’s feasible, using technology that’s already available today.

To learn more about how NASA would handle a deadly asteroid, click here: