Can You Fall in Love with a Robot?

Recent studies have found that humans can feel concern over a robot if they think that it is in pain. This indicates that we can feel as much empathy for a mechanical person as a biological one. 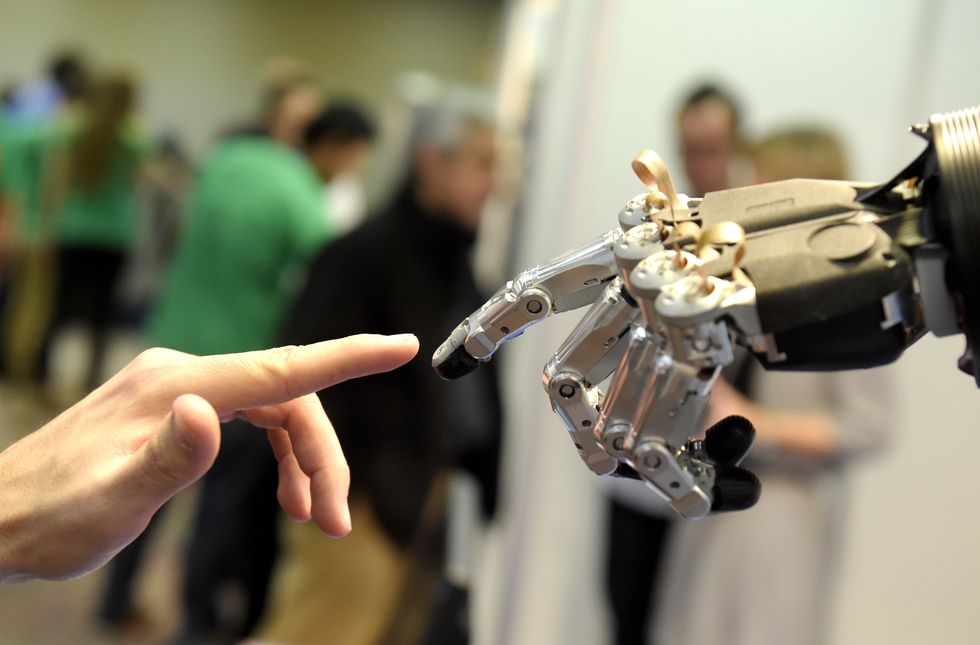 A human and a robot reaching out to each other.

Advances in robotics and AI are starting to gain some real momentum. In the coming decades, scientists predict robots will take over more and more jobs—including white collar ones, and gain ubiquity in the home, school, and work spheres. Due to this, roboticists and AI experts, social scientists, psychologists, and others are speculating what impact it will have on us and our world. Google and Oxford have teamed up to make a kill switch should AI initiate a robot apocalypse.

One way to overcome this is to imbue AI with emotions and empathy, to make them as human-like as possible, so much so that it may become difficult to tell robots and real people apart. In this vein, scientists have wondered if it might be possible for a human to fall in love with a robot, considering we are moving toward fashioning them after our own image. Spike Jonze’s Her and the movie Ex Machina touch on this.

Recent studies have found that humans can feel concern over a robot if they think that it is in pain. This indicates that we can feel as much empathy for a mechanical person as a biological one. Of course emotional concern is not the same as romantic love. The thought of humans interacting with robots on a complex emotional level was first tested back in 1966. Back then, MIT professor Joseph Weizenbaum created a computer program called “Eliza” who took the role of a psychologist. It asked participants therapy-like questions to see how they would respond and interact with the program.

The debut of a robot receptionist in a department store in Japan.

People soon began treating Eliza as if it were a living, breathing person. Though not as advanced as AI today, it did elicit in-depth responses. In fact, Weizenbaum soon found that subjects were more comfortable revealing intimate details to the program than they were to most people. Perhaps they did so knowing that Eliza wouldn’t judge.

There are indications that falling for a robot is possible. For instance, research shows that people who chitchat via email, messenger, on the phone, or through text often feel a more intimate bond than those who chat face-to-face. The pressure is off, and so too might it be with a robot.

Anyone who has found love complicated, basically all of us, has wished for a simpler relationship, and a robot lover may fit the bill. Still, AI is not at the level where it can make nuanced emotional responses. Ever go on a date with someone who doesn’t have any emotional or intellectual depth? It is such a turnoff. NYU psychology professor Gary Marcus says there are different kinds of love. Right now, we may find a relationship with a robot much like that of dog and master, at least until their intellectual and emotional intelligence is up to snuff.

Another stumbling block is whether or not the robot could love you back. Today, our mechanized counterparts can recognize human facial expressions and respond to them. This isn’t the robot feeling the emotion itself or responding out of empathy, but merely out of programming. In human relationships, we may notice that one person loves more than the other or contributes more. This is difficult in and of itself. When the discrepancy is apparent, we often consider one person “using” the other. “You don’t really love me,” a jilted lover might claim. Since we have no way of instilling emotions and empathy in robots currently and we don’t know if it will be possible, a synthetic human may become a good faker, but may in fact be incapable of loving you back.

Robots can now mimic our emotional range, but that’s not the same as having emotions.

This knowledge that the machine is faking it, or that it is unable to authentically love could bite the person, a worry that begins to bubble up more and more until it finally destroys the “relationship.” So you may be able to love a robot. But some people may not be able to sustain it long-term.

For those who can be fulfilled by the fantasy, companies could make a suitable lover based on their own specifications. These would include both physical and personality traits. The synthetic suitor would have to be programmed with certain faults as well, since imperfections would make the lover relatable. A perfect person can get on your nerves after a while, making your own faults seem pronounced.

And what about stigmatization? Would a human-robot relationship be deemed as worthy as a human-to-human one? Or would those who kept a robot lover be considered unable to find or attract a real person? Another aspect is what human-robot relationships would do to the organic variety. Why love someone who never loads the dishwasher, forgets your birthday, or hates your friends when a robot won’t ever? Of course one could argue that these interactions could never have the depth, texture, or breadth that a real human relationship has, warts and all.

True Companion is a robot girlfriend named Roxxxy introduced in 2010.

Most people today find the idea of robot-human love distasteful. But it could be worse than just merely offensive. Dr. Kathleen Richardson a UK robotics ethicist told the BBC that sexbots could seriously damage human relationships, to say nothing of it glorifying exploitation, whether it be that of a living being or no. Yet the very definitions of love, courtship, marriage, and companionship have changed dramatically throughout history. Perhaps this is why British AI specialist David Levy recently penned the book, Love and Sex with Robots. He predicts human-robot marriages will be commonplace by 2050. Levy also believes you’ll be able to order a lover or spouse to specifications and it will even be able to carry on sophisticated conversations, something our human partners today may fail to do, distracted by the love of another technology already threatening relationships, smart phones.

To see where we are with human-like robots today click here: