Can a Fidget Spinner Really Help You Focus?

Advertisers say they help with ADHD, anxiety, stress, and autism. But what do studies suggest? 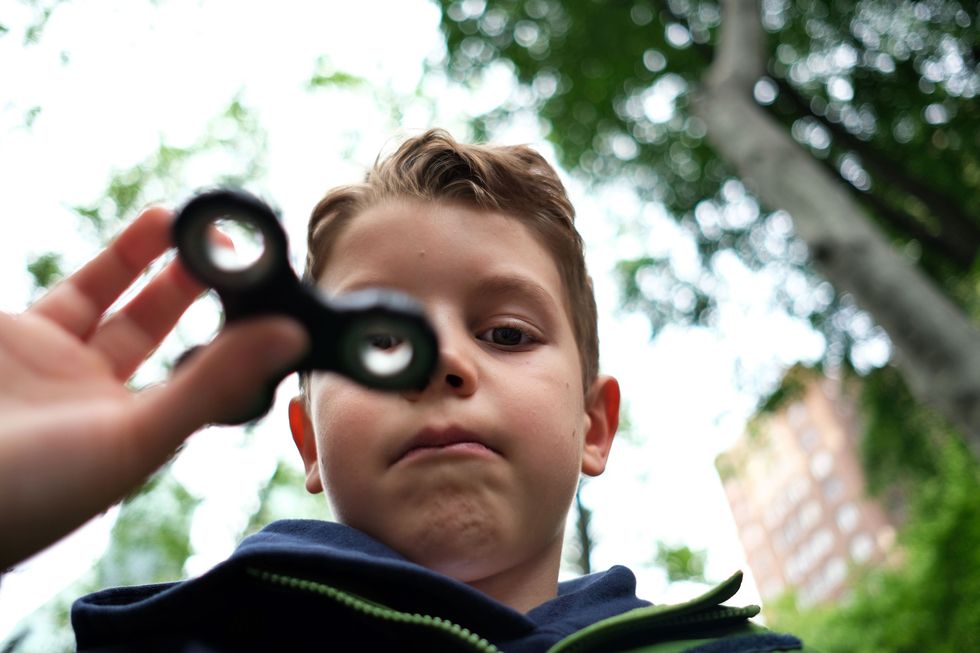 Fidget spinners are everywhere, nowadays. My younger cousins adore theirs. They spent the better part of last Sunday night showing me tricks and the different kinds they have. Some even light up. Their streamlined motion, wide assortment of colors, and the clever tricks you can perform with them, have made them a noteworthy trend, if but a footnote in fashion history, along with the slap bracelet, sea monkeys, and Rubik's Cube. They’re also making some folks rich. As of this month, fidget spinners are one of Amazon’s top 10 selling toys.

Florida inventor Catherine Hettinger created the first prototype back in 1993 to interact with her daughter, who is disabled. She patented her version in 1997. Unfortunately, no one picked it up. She tried to sell it as a therapeutic device for children with attention deficit hyperactivity disorder (ADHD), anxiety, or autism. After years of trying, she gave up. That might’ve been her tragic error.

Pretty soon, other models were on the market and last Christmas, the spinners really took off. Though first marketed to stressed-out adults, fidget spinners were soon adopted by the nation’s youth. Now, they’re all over elementary and middle schools, and giving teachers a headache. Ms. Hettinger isn’t down and out about it. In fact, now age 62, she is currently crowdfunding her “classic” spinner. One wonders if she’s missed the mark once again.

The original inventor may have missed out on a fortune. Getty Images.

Earlier this month, the fad began to sour, perhaps due to its pervasiveness. Or maybe science is now starting to catch up with the hyperbole. Dr. Mark Rappaport, at the University of Central Florida, in an interview with the Daily Mail, said that, rather than help a child with ADHD focus, “using a spinner-like gadget is more likely to serve as a distraction.”

Some schools are now banning them. In Massachusetts, New York, Illinois, Florida, and England, schools have barred students from even having them on school property. In some places, the ban is school system-wide. So do fidget spinners actually help people to focus or are they merely a distraction?

Currently, there are no peer-reviewed studies that support or refute marketer’s claims. Preliminary research suggests that children with ADHD who are allowed to fidget or squeeze a stress ball, are better able to pay attention. Julie Schweitzer is a professor of psychiatry and behavioral sciences at the University of California-Davis. She says that a fidget spinner, in being so captivating, probably undermines any potential benefit gained by allowing a student to fidget with it.

They may be so much fun that instead of helping one focus, they add to distraction. Getty Images.

I have a lot of teacher friends who groan about these toys on their Facebook pages. Their top complaint is that they distract students from completing their assignments. Some alternatives have been offered to give kids a chance to fidget in a way that’s less distracting to themselves and others.

Velcro on the desktop or allowing certain students to chew gum may work. What’s wrong with the fidgeting staples of my youth: pencils, erasers, and paperclips? Though advertisers are as smooth as ever, note that, there’s no evidence that fidget spinners provide any therapeutic benefit, whether it be stress-busting, anxiety-squashing, or what-have-you.

Dr. David Anderson is a clinical psychologist and the senior director of the ADHD and Behavioral Disorders Center, at the Child Mind Institute, in New York. He told Money, “Mental illness is difficult to treat, and it’s not something for which there are simple solutions.” Most experts say a whole treatment plan should be fashioned to suit the particular needs of each child which may include: lifestyle changes, changes to the child’s environment, therapy, and even medication. Fidget spinners may not be included. Sad.

To learn more about ADHD and what’s proven to work, click here: