Everyone could be wearing a tDCS cap in 5-10 years, top scientist states. 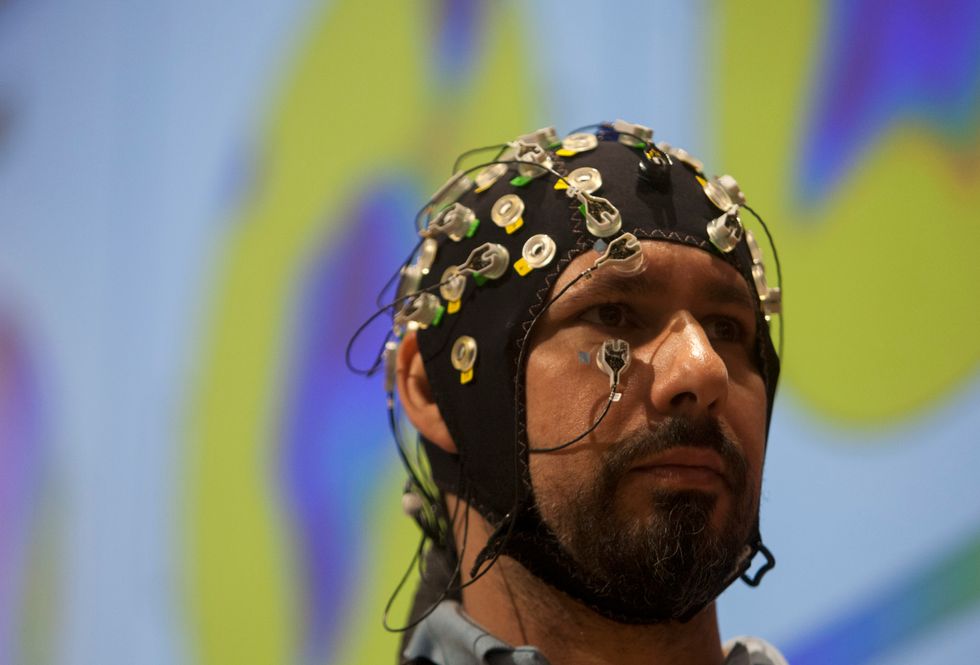 I’ve written several articles on brain stimulation, a topic I’m fascinated with. One in particular was about a project at The Defense Advanced Research Projects Agency (DARPA). This is the R&D wing of the US Department of Defense (DoD). In the previous study, DARPA scientists employed electrical brain stimulation via implants to help those who’ve suffered a traumatic brain injury (TBI), regain some memory and learning capacity. Other programs seek to accelerate learning and boost performance in normal, healthy humans.

Imagine my surprise when a scientist working on a DARPA project emailed me about an exciting study, published recently in the journal Current Biology. Being a halfway decent journalist, I followed up with one Dr. Praveen Pilly, from HRL Laboratories in Malibu, Calif. He and colleagues at McGill University in Montreal and Soterix Medical in New York, have been working in the DARPA Restoring Active Memory (RAM) program. Currently, they’re focusing on the DARPA Replay program.

DARPA RAM was created to help address the hundreds of thousands of service members and millions of civilians who suffer from TBI. DARPA wanted an implantable device to help restore memory to those sufferers. This would mean brain surgery for implantation. Dr. Pilly slowly convinced them that a non-invasive method was just as helpful.

Now Dr. Pilly is also working in DARPA’s RAM Replay program. This works with normal, healthy adults. The point is to accelerate learning and enhance memory formation by modulating neural “replays” during sleep. In this published DARPA RAM study, Pilly and colleagues used transcranial direct current stimulation (tDCS) on macaque monkeys. This is where low-level electrical current is applied to the brain via electrodes placed at strategic areas on the scalp.

Some studies have shown that tDCS can improve verbal memory and cognition. And one small study found it might improve math retention. Research has even suggested that tDCS might be useful in treating conditions such as depression, Parkinson’s, and chronic pain.

Dr. Pilly said the goal was to see if there was a neural basis for tDCS. Last year in the midst of the Cognitive Neuroscience Society’s annual conference, György Buzsáki of NYU, cast doubt on whether tDCS could in fact alter behavior. In his study, Buzsáki hooked up a cadaver to 200 electrodes. He also put sensors inside the cranium. But they failed to detect any changes in neural spiking.

The skull and skin of the head divert 90% of the electricity emitted, the NYU study found. The reason to Pilly was obvious. It isn’t any particular region or increased spiking of neurons, but communication between the cortical areas that counts. The little current that gets through he says, facilitates such communication, providing better coherence between regions.

In one NYU study (pictured here), tCDS failed to cause neurons to fire inside a cadaver’s brain. Note: this was unrelated to the HRL study. According to Dr. Pilly, it’s not individual neurons, but communication between brain regions that counts. Credit: University of Szeged.

Pilly and colleagues set out, not only to show that tDCS works but reveal the mechanism behind it. In this study, applying tDCS to the right prefrontal cortex was shown to improve a macaque monkey’s performance in what researchers called an “associative learning task.” In yet to be published research, as part of the REM RAM Replay program, they proved it works in humans, too.

Static electrical fields applied just outside the brain increased coherence between the right prefrontal cortex and the left inferotemporal cortex (ITC). These areas control executive function, which has to do with managing time, paying attention, remembering details, and other tasks associated with learning.

What they found is that tDCS can influence brain oscillations. “Transcranial stimulation can cause many statistically significant neural changes,” Dr. Pilly said. “Changes in functional connectivity between areas in high frequency bands accounts for improvements within learning.”

First, scientists at McGill took macaques monkeys and implanted sensor arrays inside their brains. While other studies have done similar experiments monitoring the brain with an EEG machine, here scientists could measure the firing of neurons in vivo (from the inside), using intracranial sensing.

“We recorded changes in local field potential (LFP), multi-unit activity (MUA), and single-neuron activity at multiple sites within the neocortex,” Dr. Pilly said. Then they hid a certain symbol among an environment. That symbol led to a food-based reward. This was in order to make an arbitrary association between a certain image and the reward. “The association cannot be inferred. You have to form a memory, in the lab, on the fly, for the experiment,” Pilly said.

It took on average 15 seconds for the monkeys to make the association from scratch, but 2 seconds when it was already in their minds. “Once you learn, there’s no difference in reaction time whether you’ve been stimulated or not,” Pilly said. What they checked was how fast the monkeys could make the association. They ran them through the experiment with their brain’s stimulated and not. The non-stimulated monkeys went through 22 trials before the association was fully formed. Stimulated monkeys took only 12 trials. This was about a 40% improvement in learning speed.

The sensor implants within the monkey’s brains were able to record the changes caused by tDCS. The scientists really wanted to know the effect tDCS had on single neurons. This study used continuous electrical stimulation in open loop. But today, they’ve moved beyond that, Dr. Pilly said. They can now target the optimal moment to stimulate a subject in order to solidify association, vis-à-vis learning or memory. And it’s all done non-invasively at a safe level of current.

“This paper is about understanding the mechanism of tDCS,” Dr. Pilly said. The research for this current paper wrapped up two years ago. More recently, he’s turned his attention to the DARPA RAM Replay program. Here, he and colleagues have been working with healthy adult human volunteers to test transcranial stimulation, to see if it can improve learning, association, and memory. Memory depends on a number of different areas of the brain, the most important being the hippocampus. Signals from here and other areas coordinate with one another to form the experiences and knowledge we recall.

Both the sleep and waking process are pivotal to learning. “We can enhance memory function by intervening during sleep,” Pilly said. “Say we have 10 memories that you learned during the day. You want to enhance a subset of them. We can intervene in such a way that the performance can be enhanced for those specific memories. We can demonstrate better recall two days later. And we can do much, much more.”

A time may come when we’re all wearing our “thinking caps.” Credit: Getty Images.

With the monkey study, the primates received low-level electrical current to areas of the brain for tens of minutes. According to Pilly, he and his team can now target stimulation, intervening only at critical points, when memory formation is most likely to occur. “We’re replicating monkey experiment with stimulation occurring only for one second” he said, “just when it gets the reward.” That’s when the association is made.

In a study published in 2007, a German team proved they could help facilitate learning by stimulating the brain in sleep through the olfactory system. As part of the RAM Replay program, Pilly and his team have shown that just a single pulse at the right time can facilitate learning and memory consolidation. Then they reinforce the memory by delivering another pulse at a key point during sleep. “Whatever can be done through sensory cuing can be done electrically and more efficiently,” Pilly said.

The goal is to get this tech adopted into wider society. Dr. Pilly says it’s inexpensive. “Just like having a better diet, this shouldn’t differentiate people.” Otherwise, you could cause a cerebral inequality gap. Fortunately, this isn’t a classified project and all the results are being published. “Anyone can implement whatever insights we are presenting,” he said. They will eventually seek out FDA approval for a particular device. He believes that in 5-10 years, use of this technology will be widespread.