Ancient deer-like creatures returned to the ocean to become whales. But why?

Researchers are starting to get a handle on why ancient creatures returned to the ocean after their ancient ancestors climbed out of it. 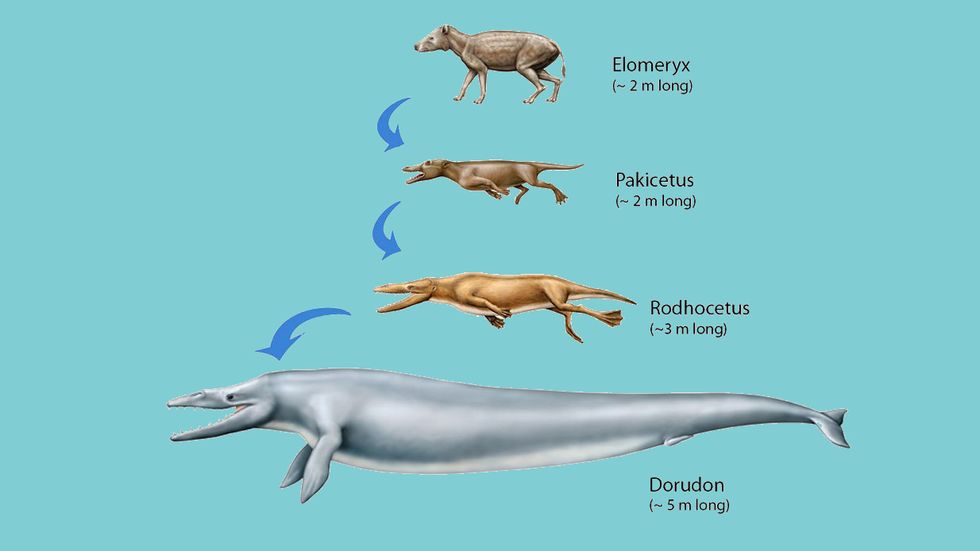 The evolution of whales. Image: John Klausmeyer/University of Michigan Museum of Natural History

The ocean may be the origin of all life on Earth, but that isn’t to say that all the animals who evolved on land left the water behind forever. In fact, we’re starting to get a pretty good picture of why certain species that returned back to the water decided to do so and how they developed into the marine animals we know today. Paleontologists say creatures began exploring the land during the Silurian period (440-410 million years ago). No one is sure why this occurred. Some scientists say it may have been tight competition for resources in marine environments that pushed species to look for food elsewhere. The first land explorers were arthropods, who started spending just a little bit of time on the surface and then began doing so more and more. They were pre-adapted to land exploration because of their hard shells, which helped retain water. Around 370 million years ago, certain species became permanent land residents. Spiders, mites, and centipedes were the first inhabitants. Then, over the next few million years, amphibians, reptiles, and finally mammals made it onto the scene. But that doesn’t mean they all stayed on land.

During the Early Triassic period (approx. 252-247 million years ago) onward, dozens of terrestrial and freshwater animals returned to the sea. Birds, reptiles, amphibians, and mammals were among them. They evolved and eventually became dominant players in their ecosystems during the Mesozoic and Cenozoic eras. Today, lots of the marine mammals we know and love started out as land-based species.

For instance, a walrus’s ancestor resembles the modern otter, while whales come from a species of ancient deer-like creatures known as Indohyus. They roamed southern Asia about 48 million years ago. An Indohyus was only about the size of a raccoon, and researchers believe that they fed on aquatic plants.

So what coaxed these creatures back into the ocean 100 million years after their ancestors climbed out of it? A duo of researchers contend that this question has received far too little attention, until now. The results of their study has been published in a report in the journal Paleobiology. To date, there have been two prevailing hypotheses.

In one, ecosystem collapse caused mass extinction, pushing animals back toward the sea for food. In another, competition added pressure on species while abundant food sources in the ocean, particularly in areas near the shoreline, pulled species back toward the sea. Geerat Vermeij at the University of California-Davis and his colleague Ryosuke Motani decided to test these theories to see which one was more likely.

The scientists isolated 69 incidents in which a terrestrial species decided to live in or extract sustenance from the ocean after a mass extinction had taken place. In two of the largest such events, one that occurred 201 million years ago at the end of the Triassic and another at the end of the Cretaceous period, there was no grand exodus of land animals back into the sea. A 2014 South African study discovered an increase in species returning to the ocean 66 million years ago, at the tail end of the Cretaceous extinction. What differed in this study was that the previous one only included animals which are still around today.

Vermeij and Motani’s study supports the idea that terrestrial animals took advantage of food sources in the ocean periodically, not just after mass extinctions, and the trend has only increased over the past 60 million years or so. One reason that may be a pull factor: kelp and seagrass beds developed over this period, allowing for more marine life to sprout and proliferate closer to shore.