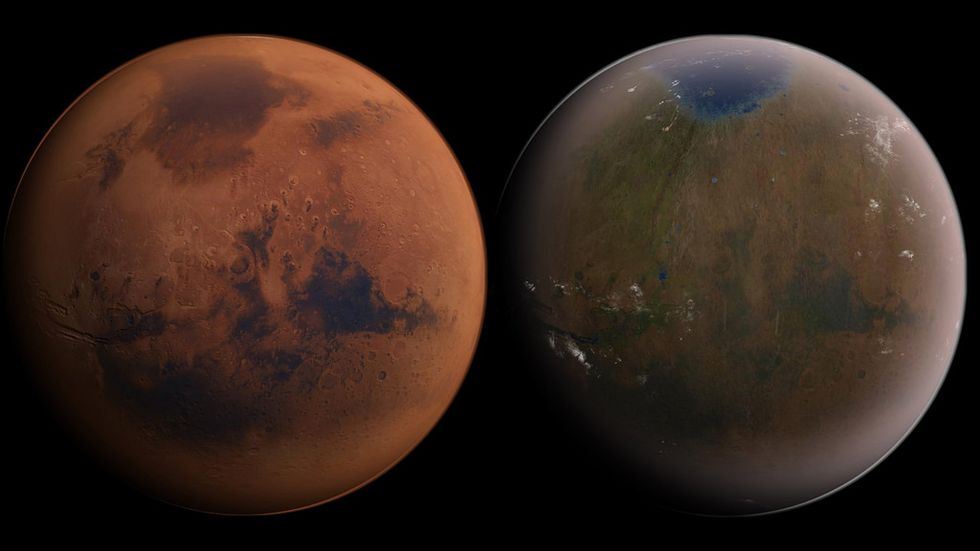 Due to ours being a richer world today, and advances in rocketry and other technologies, a 21st century space race is just starting to heat up. This time, it isn’t just the US and Russia competing, but India, China, the EU, and private organizations such as SpaceX and Mars One. They all want to build the first permanent colony on the Red Planet. Mars One has the swiftest timeline, placing people on the surface by 2025. NASA has a far more cautious plan, establishing a permanent colony by 2040. But there are lots of stumbling blocks to overcome.

From the surface, Mars looks like a cold and forbidding wasteland, devoid of a breathable atmosphere, running water, and virtually uninhabitable, without spacesuits and airtight shelters. It’s worse than that, however. The planet is being constantly bombarded by solar radiation. Consistent exposure is likely to cause deadly cancers and early onset Alzheimer’s among colonists. How quickly or slowly these develop however, is anyone’s guess. It depends upon shielding and lots of other factors.

Astronauts working on the international space station (ISS) encounter the same amount of radiation as workers at a nuclear power plant. But those astronauts are only up there for a limited time. The longest mission to date is 215 days. What happens if you are constantly exposed for the rest of your life? There could also be serious consequences in terms of fertility. Radiation exposure can cause mutations in the genetic code, birth defects, and even infertility. How could a colony survive?

Artist rendition of Mars being buffeted by solar radiation. By: NASA/Jim Green.

Despite terrific obstacles, the planet has potential. All the things that are needed to terraform the planet are there, minus a strong magnetic field. There is water for instance, frozen at the poles and within the soil. It once had an atmosphere, free flowing water, an ocean, and perhaps even life.

Many colonization plans suggest terraforming the planet, which is expected to take hundreds of years. Some include releasing greenhouse gasses into the atmosphere from factories, or as Elon Musk has proposed, using nuclear weapons at the poles to melt the ice caps. But with this new plan, nature actually does all the work itself, without the dangers inherent in those other options.

At a recent NASA workshop, held at its headquarters in Washington, D.C., Planetary Science Division director Jim Green, proposed a captivating alternative—encapsulate the planet in an “artificial magnetosphere.” The Planetary Science Vision 2050 Workshop is an unveiling of proposals, which could occur or at least begin, by midcentury.

Dr. Green’s presentation was entitled, "A Future Mars Environment for Science and Exploration." Green and a panel of colleagues proposed an artificial "magnetic shield" provided by a device, dubbed Mars L1. This would remain in steady orbit between the planet and the sun, shielding it from solar bombardment.

The basic idea is having an object create a large electric circuit or dipole, generating enough energy to cover the planet in an artificial magnetic field. This would be composed of two oppositely charged magnets connected to inflatable structures, placed in orbit somewhere between Mars and the sun. One important aspect according to Dr. Green, "We need to be able then to also modify that direction of the magnetic field so that it always pushes the solar wind away.”

Building an artificial magnetosphere around Mars. By: NASA/Jim Green.

Though it sounds, what the presenter called “fanciful,” experiments creating miniature magnetospheres are already ongoing. These are in hopes of devising a way to protect astronauts aboard the ISS as well as manned spacecraft. Green wants to scale up such a system to cover a whole planet. "It may be feasible that we can get up to these higher field strengths that are necessary to provide that shielding," he said.

Once stable, the “magnetotail” is expected to allow a revival of the atmosphere. Half the atmospheric pressure of our own planet could occur within just a few years. 4.2 billion years ago, something caused the Red Planet’s magnetic field to severely weaken. Since that time, highly charged solar particles have slowly stripped it of its atmosphere, causing Mars to go from a warm, wet planet, to a dry, cold one. Today, the atmosphere is 100 times thinner than ours.

Shielding from such particles would warm the surface ~7 °F (4 °C). This would then melt the CO² at the poles, helping to build up the atmosphere. By creating a greenhouse effect, the ice on the planet’s surface should melt. "Perhaps one-seventh of the ancient ocean could return to Mars," Dr. Green said. At its current rate, this would take 700 million years.

Though the plan is entirely theoretical, if it worked, the planet could actually be livable in about a century or so, NASA scientists claim. That’s just a few generations. It’s vital to colonization too, as any sustainable colony will sooner or later have to start growing its own food. The distance from Earth to Mars is just too great. If it works, it could add an important tool to terraforming and help us colonize other places. “The solar system is ours, let’s take it,” Green said.