One radical notion is that the story of Jesus was a type of psychological warfare to pacify the Jews. 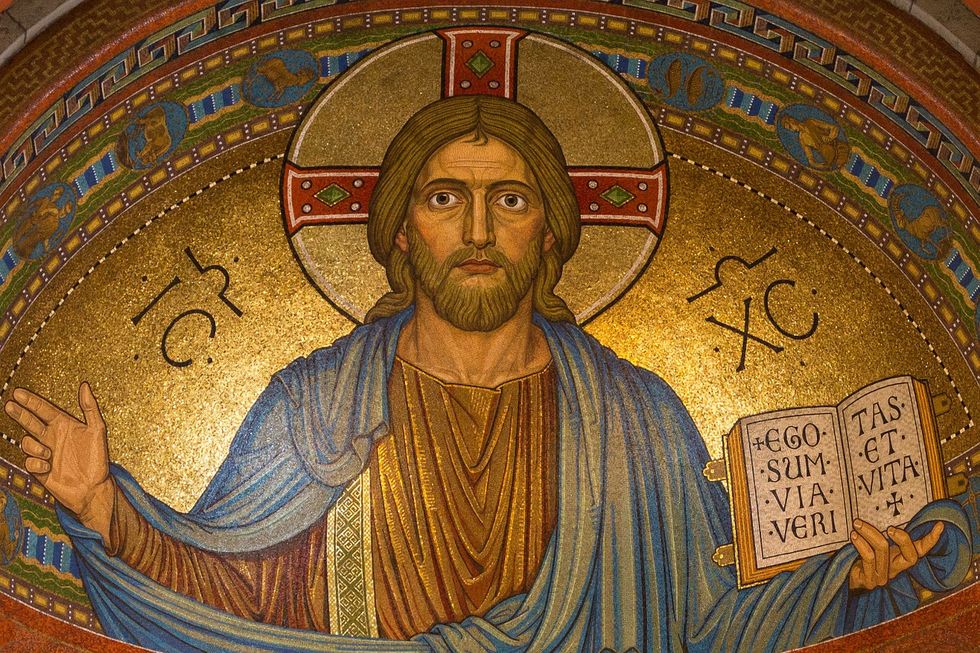 An Orthodox Church in Belarus during Easter. Getty Images.

Christmas is a time of year where people are supposed to put aside their differences and come together to celebrate in peace, love, and understanding. Though few question the traditions of the season, many of them predate Christianity in Europe. A lot was borrowed from the Norse tradition of Yule—the celebration of the winter solstice. Others originate with the Roman festival of Saturnalia. Ancient pagans brought pine branches into their houses, lit up the night with bonfires and candles, gave gifts, and burned the yule log.

Even Santa Claus comes from a variety of sources. Of course one of them is St. Nicolaus of Turkey. But earlier renditions look far more like the iconography associated with Odin or the Anglo-Saxon god, Woden. Ancient proselytizers when converting the continent found it was much easier if people could keep their traditions, and merely put a Christian stamp on them. And that’s how these were incorporated into the season. Some even question whether or not Jesus was born on December 25. The Orthodox Church for example celebrates Christmas on January seventh, as according to the Julian calendar which predates the Gregorian, a date they claim is more accurate.

Today more and more, historians and bloggers alike are questioning whether the actual man called Jesus existed. Unfortunately, many of the writings we do have are tainted, the authors being religious scholars or atheists with an axe to grind. One important point is the lack of historical sources. In the bible, whole chunks of his life are missing. Jesus goes from age 12 to 30, without any word of what happened in-between.

Historians have measures in terms of a burden of proof. If an author for instance is writing about a subject more than 100 years after it occurred, it isn’t considered valid. Another important metric is the validity of authorship. If the author cannot be clearly established, it makes the record far less reliable.

What we do have are lots of sources completed several decades after the fact, by authors of the gospels who wanted to promote the faith. The gospels themselves are contradictory. For instance, they tell competing Easter stories. Another problem, there aren’t any real names attached to many of them, but rather an apostle’s who “signed off” on the manuscript. There is also evidence that the gospels were heavily edited over the years.

Some accounts of the Christmas story have no mention of the star or even the three wise men.

St. Paul is the only one to write about events chronologically. Even then, few facts about Jesus are divulged. Paul’s Epistles rest on the “Heavenly Jesus,” but never mention the living man. For such an important revolutionary and religious figure, there are surprisingly no eyewitness counts. And the writings we do have are biased. Roman historians Josephus and Tacitus do make a few, scant remarks about his life. But that was a century after Jesus’s time. So they may have garnered their information from early Christians. And those threadbare accounts are controversial too, since the manuscripts had been altered over time by Christian scribes whose job it was to preserve them.

Today, several books approach the subject, including Zealot by Reza Aslan, Nailed: Ten Christian Myths That Show Jesus Never Existed at All by David Fitzgerald, and How Jesus Became God by Bart Ehrman. Historian Richard Carrier in his 600 page monograph: On the Historicity of Jesus, writes that the story may have derived from earlier semi-divine beings from Near East myth, who were murdered by demons in the celestial realm. This would develop over time into the gospels, he said. Another theory is that Jesus was a historical figure who become mythicized later on.

Carrier believes the pieces added to the work of Josephus were done by Christian scribes. In one particular passage, Carrier says that the execution by Pilate of Jesus was obviously lifted from the Gospel of Luke. Similar problems such as miscopying and misrepresentations are found throughout Tacitus. So where do all the stories in the New Testament derive? According to Carrier, Jesus may be as much a mythical figure as Hercules or Oedipus.

Ehrman focuses on the lack of witnesses. “What sorts of things do pagan authors from the time of Jesus have to say about him? Nothing. As odd as it may seem, there is no mention of Jesus at all by any of his pagan contemporaries. There are no birth records, no trial transcripts, no death certificates; there are no expressions of interest, no heated slanders, no passing references – nothing.”

According to universal archetypes, dying on a hill is a prerequisite for becoming a mythic hero.

The Rank-Raglan Mythotype is a set of traits that heroes across cultures share. There are 22 of them including a virgin birth, the audience knowing little to nothing about his childhood, being the son of god, dying on a hilltop, and the mysterious disappearance of his remains. Jesus meets 20 of the traits total. In fact, no one else meets the hero archetype quite as well.

One biblical scholar holds an even more radical idea, that Jesus' story was an early form of psychological warfare to help quell a violent insurgency. The Great Revolt against Rome occurred in 66 BCE. Fierce Jewish warriors known as the Zealots won two decisive victories early on. But Rome returned with 60,000 heavily armed troops. What resulted was a bloody war of attrition that raged for three decades.

Atwill contends that the Zealots were awaiting the arrival of a warrior messiah to throw off the interlopers. Knowing this, the Roman court under Titus Flavius decided to create their own, competing messiah who promoted pacifism among the populous. According to Atwill, the story of Jesus was taken from many sources, including the campaigns of a previous Caesar.

Of course, there may very well have been a Rabbi Yeshua ben Yosef (as would have been Jesus’s real name) who gathered a flock around his teachings in the first century. Most antiquarians believe a real man existed and became mythicized. But the historical record itself is thin.