Forget your zodiac sign, but do mind when you were born. It does say something about you, after all. Researchers at Columbia University Medical Center (CUMC) came across an astonishing discovery recently. Your birth month and specifically what season you were born in, may tell you what diseases you’re more likely to have.

The reason is, environmental factors the developing fetus is exposed to, can affect the child’s health later on. Babies born in summer or fall for instance, are more likely to develop asthma since the mother, pregnant mostly through winter, had a higher risk of catching a cold or the flu. Birth month wasn’t the soul focus. Pollution, second-hand smoke, and other environmental factors were also included in the analysis.

Those born between February and July were less likely to develop certain illnesses, while those born between September and November had the highest risk. The healthiest month to be born in was May, while the unhealthiest was October. The results of the study were published in the Journal of American Medical Informatics Association.

Previous research looked at the association of birth month and certain diseases such as nearsightedness (myopia), ADHD, and asthma. One landmark 1983 study equated being born at certain times of the year with asthma. The reason given was that dust mites were more prominent at those times. But this was the first large-scale project to examine the correlation, if any, between a large number of diseases and an enormous pool of people. Investigators looked at 1,688 diseases and cross-referenced them with the birth records and medical histories of 1.7 million patients. 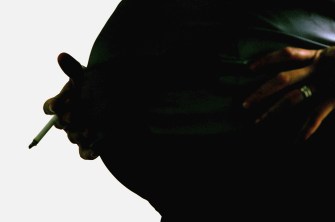 Each person was treated at New York-Presbyterian Hospital/CUMC between the years 1900 and 2000. Researchers developed their own computational method to assess the data and reach conclusions. They found that 55 diseases correlated strongly with one’s birth month. They strengthened the cases for 39 illnesses suspected of being associated with birth season. Finally, they uncovered 16 new disease-birth month relationships unknown previously.

Nicholas Tatonetti, PhD, assistant professor of biomedical informatics at CUMC, was the senior author on this study. He said, “This data could help scientists uncover new disease risk factors.” One of the most important discoveries was, there are nine types of heart disease and they’re related to birth month.

Those who are born in March are most likely to suffer congestive heart failure, arterial fibrillation (AFib), and other serious cardiovascular conditions. AFib is an irregular, rapid heartbeat. Being born in March most likely influences 1 out of every 40 AFib cases, researchers found. Tatonetti said this suggests a biological mechanism behind this relationship, but what it is remains clear.

For ADHD, 1 in 675 cases are influenced by birth month. This squares with a previous study out of Sweden, which found that babies born in November had a higher risk of ADHD. Some health experts wonder whether access to vitamin D—a crucial nutrient, accounts for these seasonal differences. We absorb vitamin D through our skin from sunlight. Since we get more sunshine in the spring and summer, pregnant women in these months might be fortifying their children against disease. 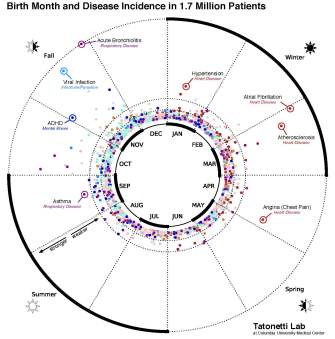 Dr. Tatonetti did qualify these findings by saying, “It’s important not to get overly nervous about these results because even though we found significant associations the overall disease risk is not that great.” He added, “The risk related to birth month is relatively minor when compared to more influential variables like diet and exercise.” That’s huge, because it means the factors we have control over are the most significant.

Mary Regina Boland put the study into context. She’s a graduate student at Columbia, and was the lead author on this study. She said. “Faster computers and electronic health records are accelerating the pace of discovery. We are working to help doctors solve important clinical problems using this new wealth of data.”

According to Dr. Tatonetti, “Seasonality is a proxy for variable environmental factors present at the time of your birth, and we are learning more about the very large role that environment, and gene-environment interactions, plays in our development.” He added, “This could be one way to start mapping out those gene-environment effects.”

Future studies will be conducted in other areas of the US and in nations abroad to see if there are similar results and if local, environmental factors exert their own influence.

Related
Neuropsych
Why is a Starbucks loyalty rewards program making customers so angry?
The rewards price to get a free cup of hot coffee at Starbucks is going up.
Empowering growth
7 essential management training topics for every team leader
From emotional intelligence to problem solving, these management training topics will set team leaders up for success.
Thinking
What if you could rewire your brain to conquer suffering? Buddhism says you can
For Buddhists, the “Four Noble Truths” offer a path to lasting happiness.
Hard Science
Solved: 500-year-old mystery about bubbles that puzzled Leonardo da Vinci
The solution involves the infamous Navier-Stokes equations, which are so difficult, there is a $1-million prize for solving them.
Health
When’s the best time to consume caffeine? Hint: Not right after you wake
Get the most out of your coffee.
Up Next
Mind & Brain
Empathy Can Be Hazardous to Your Health, Finds Study
A new study shows how feelings of empathy can be potentially harmful to your health.