Imagine using neuroscience to manage a company, nonprofit, or other organization? That’s basically the premise of Paul Zak’s new book, Trust Factor: The science of Creating High-Performance Companies. Oxytocin or the “love chemical,” is both a neurochemical and a hormone.

In a previous tome, the Zak called oxytocin the, “moral molecule.” An increased level gives us feelings of warmth, empathy, and generosity. It plays a role in human bonding, including infant and mother and couple bonding. Besides in our private and family lives, it also plays a role in commerce, culture, and the work sphere.

Those countries which have higher trust levels see more business transactions and therefore, have more robust economies. The same is true internally for an organization. Zak in experiments over the past eight years, found that when we interact with each other in a positive way, say after a ritual dance or celebrating a coworker’s accomplishment, we release oxytocin which in turn bonds members of our group to one another.

I talked with neuroeconomist Paul Zak recently about his new book. Trust is a brain mechanism, he says. But how does it work within groups, and how could knowledge of this oxytocin circuit be used to make organizations run more effectively? He found that it all comes down to culture.

“For a long time people thought culture was too squishy a thing,” Zak said. “But if you look at the science behind it, once you quantify it, you can manage it for high performance.” He ran experiments to find out “how and why people work effectively in teams.”

This was in order to quantify organizational trust and the factors that influence it. “From work I’ve done since the early 2000s, we know that trust is the key performance lever,” he said. “So when trust is high you increase reliability, and so one aspect of culture we know a lot about is trust.” 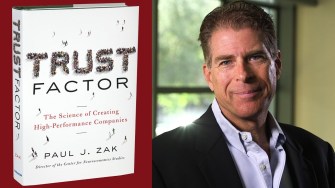 Neuroeconomist Paul. J. Zak says trust is the most important part of any organization. Credit: YouTube.

Through experiments in the lab, he identified the elements which make up a healthy and productive work culture. “We found these eight components that have the acronym OXYTOCIN.” They include: Ovation, Expectation, Yield, Transfer, Openness, Caring, Investment, and Natural. The last chapter is a compilation of the data which supports his theories. The acronym not only gives advice on how to build a more effective organization, it can help you decide whether or not you’re part of the right one. See if these are part of your job.

The O stands for Ovation. “Ovation in our language is recognizing high performers,” Zak said. “It (the book) tells you how to build recognition programs that have the biggest impacts on brain behavior. Those are programs that are close in time to when the goal is met, that are personal, tangible, that come from peers, and that are celebrated in public.”

With Expectation—the E, Zak suggests giving difficult but achievable goals. This engages the brain’s reward system (the limbic system). Instead of an annual review, which he calls “useless,” he suggests consistent periodic updates on performance. Rather than managing every aspect of how something gets done (or micromanaging it), Y-Yield, is how the team decides to reach a goal, together, and who will handle what aspect.

T stands for Transfer which “allows colleagues the freedom to choose how, when, and where they work.” Autonomy helps build trust and so boosts oxytocin. It also allows employees more pride and ownership of their work.

Openness is the second O. Though we all say we value transparency, in the book Zak writes, “Only 40% of employees report that they are well-informed about their company’s goals, strategies, and tactics.” He suggests better listening practices and open door policies. The C stands for caring. In some organizations, building relationships with colleagues is frowned upon. Zak says that caring is a mainline value in all successful companies, old and new. 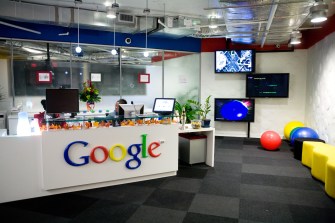 Companies like Google have disrupted what we think of as “corporate culture.” Credit: Getty Images.

The I stands for investment. “Money is a weak motivator,” Zak said. He believes companies overvalue salary and benefits, and undervalue things like investing in an employee’s professional life. Just increasing training hours or attending conferences can help a lot. “It’s about nurturing the talent around you,” he said. Finally, there’s N for natural. That’s the supervisor or manager just being a natural person who is caring, considerate, and isn’t afraid to be vulnerable.

Zak is now working with a company called the O-Factor, O standing for oxytocin. “We’re essentially tool developers,” he said. They’ve built software around his research, including a survey and a trust dashboard.

“We’re really providing tools so that each company can use it on their own and change the behaviors of people at work.” He added, “We’re essentially in the behavioral change business.” The HR manager or chief learning officer would use these tools to measure the company culture, identify weak points, and run social experiments to try and improve the culture. “Once you have data you’re systematically, efficiently improving trust.”

Research shows those happier with their work are less stressed, making them better parents, spouses, and even citizens. “People will work hard if they feel what they’re doing is important and the people around them depend on them.” Zak added, “It’s about nurturing the talents around you and letting it blossom and develop and grow.”

Related
Strange Maps
The horrors of World War II air war, in one stark map
This graph shows how badly German cities were hit by Allied bombing raids.
Hard Science
Subatomic ghosts shed new light on the structure of protons
A Fermilab study confirms decades-old measurements regarding the size and structure of protons.
The Present
The Taoist philosophy behind Alibaba, China’s e-commerce giant
Alibaba has played a key role in China’s meteoric economic rise.
The Well
Can we condition ourselves to be heroes?
Neuroscientist Robert Sapolsky on the science of temptation, and the limitations of your brain’s frontal cortex.
▸
6 min
—
with
Robert M Sapolsky
Thinking
3 brain games to practice deductive, inductive, and abductive reasoning
Take a closer look at the different types of reasoning you use every day.
Up Next
Personal Growth
How Do Companies Engineer Our Unhappiness?
In The Hacking of the American Mind, Robert Lustig holds up a much needed mirror to our consumption habits.