I saw a film the other day in what was mostly an empty movie theater. Some whispering a few rows behind me apparently annoyed another moviegoer, and before I knew it, there was a shouting match.

That’s just the most recent example that comes to mind of how rudeness can quickly escalate between two people: One impolite response begets another, and another… But a new study in the journal of Applied Psychology shows that rudeness has a ripple effect, affecting interactions outside the initial one. 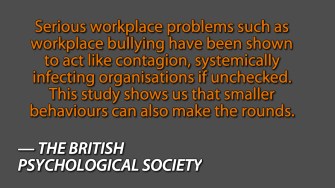 In experiments performed at the Warrington College of Business Administration, when individuals were prompted to share money with each other, they were less likely to share with people who were rude to them.

But experimenters determined that this bad feeling carried over into the next lab-controlled interaction. After Michael and Stephanie had a rude encounter, for example, Michael was automatically less friendly with George. 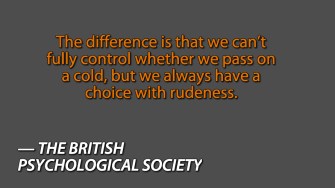 Our reaction to rudeness is more than social. It’s biological. Researchers also found that our brain picks out rude words and impolite intonations faster than neutral speech and text. It seems we’re on high alert against rudeness, and once we encounter it, our un-thinking response is to be rude back.

How We Frame Climate Change May Help Bridge the Political Divide